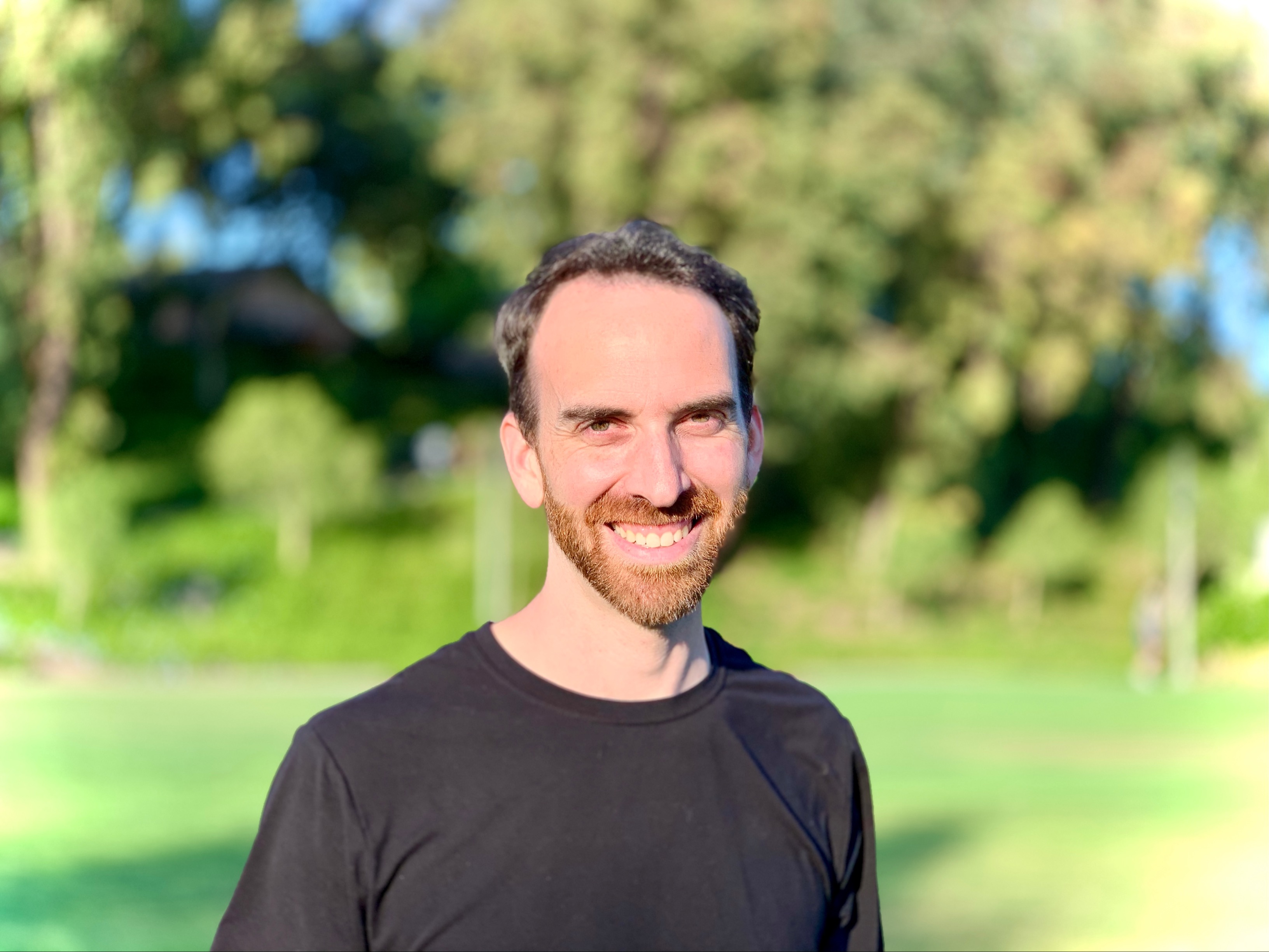 Hi David! Tell us a little about your humble beginnings in the games industry leading up to arriving at Rogue Planet Games.

Hello everyone, it all started with my first job at a game studio as an Animator on cinematics for GhostBusters: The Video Game during my last year of obtaining a Bachelor’s of Fine Art Degree at Laguna College of Art and Design. From there my career opportunities grew and I went on to work on Animations for Call of Duty: Black Ops, Gears of War 3, Medal of Honor: Warfighter, and many more. My role as a Senior Animator transitioned over time into becoming a Senior Technical Animator, working on everything from rigging, skinning, animating, integrating animations, and creating the logic for code to play the appropriate animations in the game engine. As a Senior Technical Animator, I have worked on Ashes of Creation, and helped create two Harry Potter virtual reality experiences before coming on board to this amazing team at Rogue Planet Games working on PlanetSide 2.

What are some of the first animations and rigging assignments you’ve worked on in PlanetSide 2?

One of my first assignments I started on here at Rogue Planet Games was working on the “Endeavor” weapons. This involved rigging / skinning the weapons and animating them firing, reloading, etc. These weapons had a unique way of reloading by pulling the slider back on the side of the weapon which required new animations on the First Person and Third Person Player.

Above is the Endeavor Assault Rifle weapon with the bones visible to show.

The Chimera Battle Tank has been rolling up on the battlefield since release. Can you give us a glimpse of what it was like rigging and animating that tank?

The Chimera came with some challenges, since this vehicle was different from any of the other vehicles. The driving system that controls the vehicles relies on only the front wheels rotating left and right to steer. However, the Chimera has the whole front section of the tank that rotates left and right to steer rather than only the front wheels. We knew that this difference was going to change how the vehicle needed to be rigged and set up. We came up with a solution which involved creating two sets of front wheels. The first set of wheels were used to drive the vehicle and are hidden. These were not attached to the steering arms and act as if the front is stationary with the wheels only able to turn in place. The second set of wheels are attached to the steering front arms and are visible to give the illusion that they are the ones driving.

I created a steering animation by creating the rotation of the tanks front section sweeping from the furthest degree left to right. I created logic within Morpheme that chooses a single frame from that sweeping animation based upon the given turning angle from the game. This way, I can use one animation for steering and choose what frame to use and that will loop repeatedly until there is a change in direction. I used the same approach for the suspension as well.

The suspension was animated to set the highest and lowest positions for all six suspensions traveling up and down at the same time. I used that animation in the vehicle network, where I applied that single animation to each individual suspension so they can move independent of one another.

Could you share how animations for new assets make it into the game? What does your process look like?

Sure, an example would be a new weapon. I first meet with the design and modeling team and go over any new features and needs for animation. Next, I receive the model asset from the modeling department and begin rigging the weapon with bones and attach them to the mesh.  Once the rig is complete, I create the various animations of the weapon firing, reloading, idling, etc. Then I integrate those animations into a software named Morpheme which is used to connect the animations to the code. This program uses visual scripting, allowing me to create all of the logic that is needed to allow the code from the game to trigger the appropriate animations. The more complex systems are for the First Person and Third Person players. These consist of layers of animations applying on top of each other and blending together to become the final visual result. 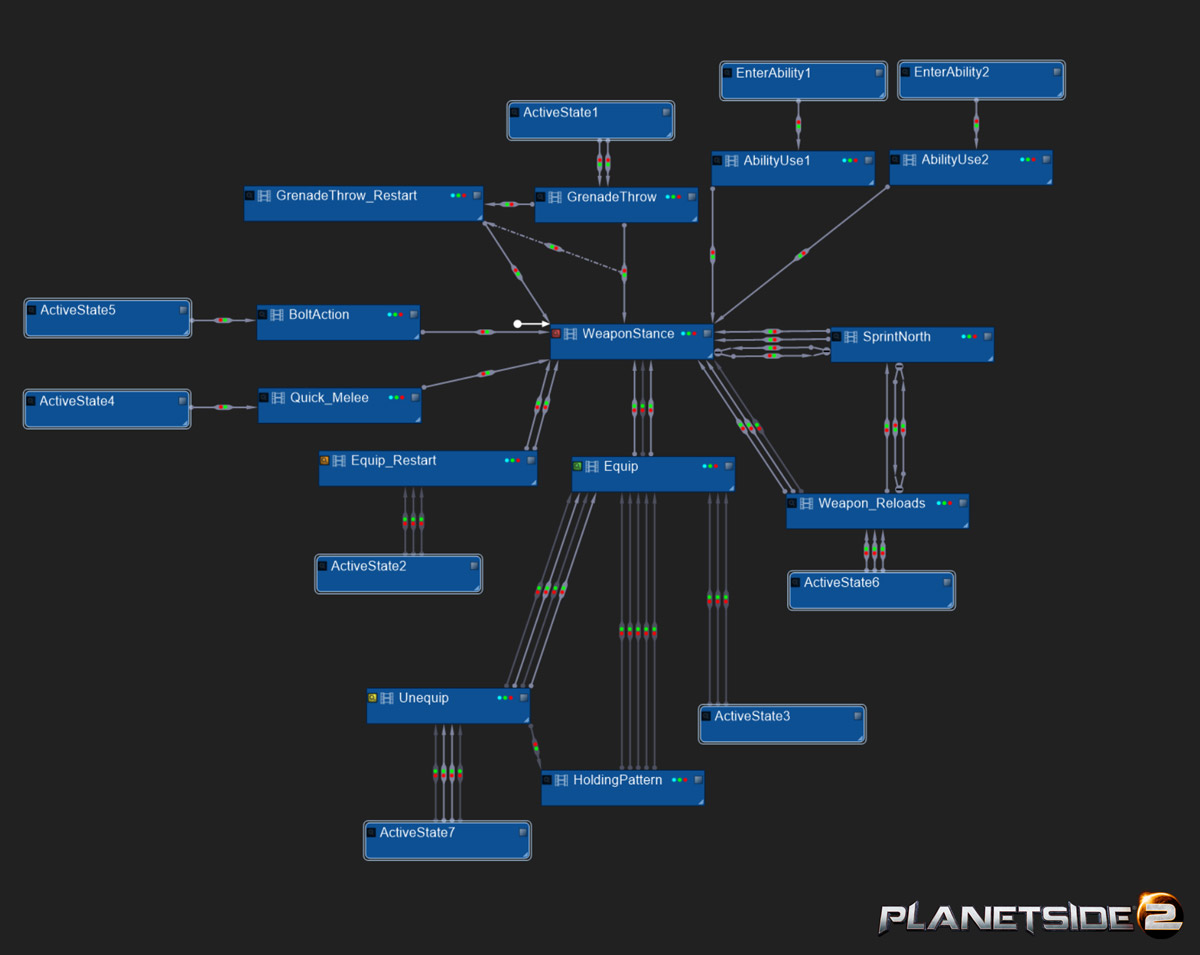 Here is an example of a piece of the network called a state machine where each of the “states” (blue boxes) have “transitions” (arrows) between them. Each transition contains logic to switch to a new state when needed.  It can get quite complex with each state containing within itself a variety of states and/or animations that are selectable via logic.

What advice can you give to our community of artists and animators who may be interested in working in the games industry?

The games industry is continually growing and evolving. There are new techniques and new technology that are changing the way games are being made; and you will want to learn and grow to keep up. There are so many more avenues of learning now than ever before, including streaming videos, tutorials, online classes, conferences, and of course art colleges. I recommend at first, learning a little bit of all the responsibilities (roles) so that you can have a general understanding of what is required to complete an asset. You can then determine what role you really enjoy and start honing in on that till you are really good at it. Then over time continue adding more skills to your repertoire that you can use. This will make you a more valuable employee and allow you to wear multiple hats to get things done.

Networking is a really good way to connect with fellow artists and get yourself known.  Networking allows you to learn tips and tricks, get a pulse of what's going on in the industry, get advice, and hear of opportunities that may not be advertised yet. I recommend attending conferences, animation clubs, social media groups, etc, which can also help you connect with industry professionals.

Share your comments and feedback about this month’s Developer Spotlight here!

Interested in a career in gaming? Check out our careers page for job listings!

Previous
Into September
Next
A New Player Experience