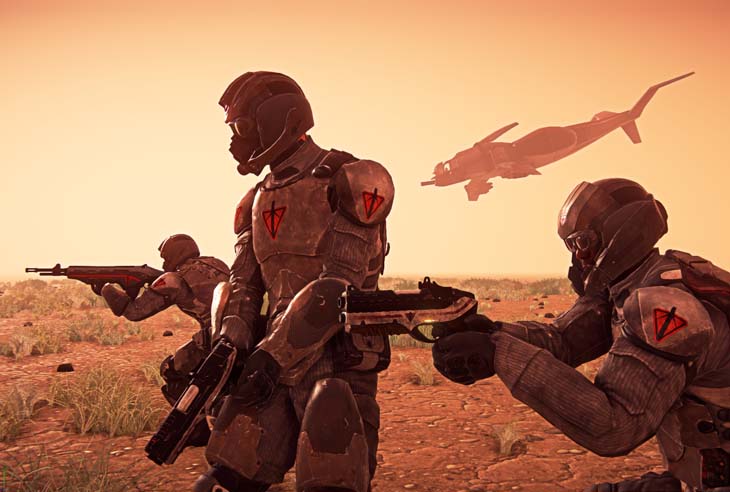 In PlanetSide 2, the team you’re on means a lot more than just what color armor you’re wearing. Each of our three iconic empires has access to unique weapons and weapon attachments, vehicles, abilities and more. You’re really choosing a play-style that will mold your character throughout their entire life time.  This week we will reveal some exciting details about one of these empires, the Terran Republic.

The Terran Republic brought an end to wars on Earth and ushered in an era of unprecedented peace and prosperity that lasted for hundreds of years. It was under the banner of the Terran Republic that humans reached for the stars and eventually landed on Auraxis. Their Republic is built around order and the rule of law, with the central tenant that no individual is above the rules. Loyalty and fealty are core to the Terran Republic ethos and from that grows a spirit of total camaraderie and brotherhood amongst its proud and mighty warriors.

More so than any other empire, the TR are a professional military, they are the most synergistic of the teams and benefit the most from numbers and coordination. Their weapons and vehicles are top of the line, shining and new, but conventional. They eschew experimental ordinances and energy weapons, preferring to stick with what has worked for hundreds of years – accurate, high velocity bullets, and lots of them.  Terran Republic weapons have the fastest firing rates, largest ammo capacities, and are generally designed to allow for maximum sustainable damage.  A well drilled squad of Terran Republic troops is one of the most fearsome and deadly forces you’ll ever meet on the battlefields of Auraxis.

On the vehicles side, the Terran Republic has two unique empire vehicles, the Mosquito fighter jet and the Prowler battle tank.  The Mosquito is an extremely agile attack aircraft, which can be outfitted with a variety of weapon systems to suit the needs of the republic, and has the fastest top speed of any air vehicle allowing it to quickly disengage from a sticky situation and regroup.   The Prowler is a medium tank that is not only the fastest empire specific tank on the field but it can be armed to the teeth with extra weapon systems beyond the other empires medium tanks, making it one of the deadliest vehicles in the game.

Over the next few days we will be releasing some really exciting stuff including new screenshots, 360 degree turn-arounds of some of the Terran Republic armor and more details about the Terran Republic and their military machine.  We’ll also be continuing to release some new backstory and as always will be answering your TR related questions on twitter, facebook and the forums.

So, until next time, remember: “Loyalty until Death, Strength in Unity!”