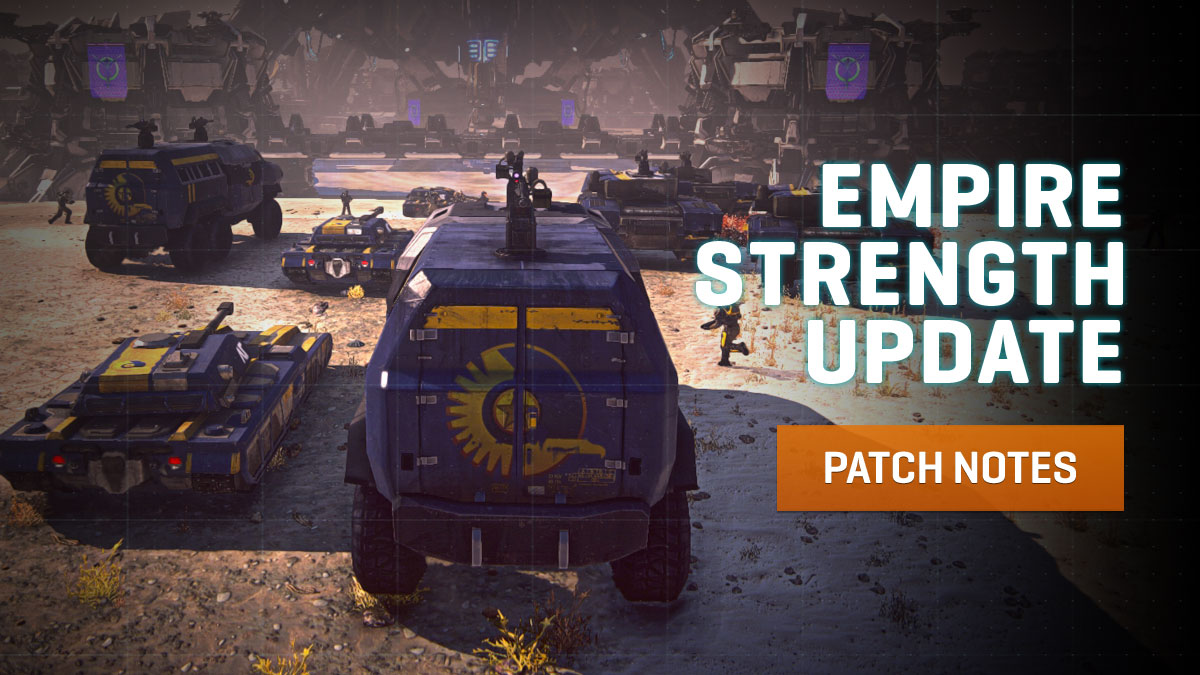 PC servers will be taken offline Wednesday, January 15, 2020 at 5:30 AM PST (1:30 PM GMT) for extended downtime to bring the January update and make hardware upgrades. Downtime is expected to last up to 4 hours.

Territory now matters at all times, as each empire gains strength when key facilities are captured, and when continent events are won.
When a faction reaches 100 Empire Strength or more, a Meltdown alert fires off (provided no other events are currently active,) and the victorious faction will lock the continent.

Gaining/losing Empire Strength is as follows:

Prior to this change, continents were standardized at 3 continent events (like Aerial Anomalies, Maximum Pressure, Gaining Ground,) before requiring 41% territory control from a single faction in order to trigger an end-of-continent Meltdown alert. With this update, factions can force continents to turn over more quickly by completing strategic map goals, and continent event wins will progress players toward the final battle over a continent.

Dev Note: Koltyr has been in kind of a weird spot, in addition to being plagued with technical issues. As a VR zone, it often stood as more confusing for new players than helpful as its intended testing ground. In a future update we'll be converting Koltyr to a standard combat continent that opens and closes during off-peak hours. This should help reduce the frustration of finding and sustaining combat in times of low population, and add some gameplay variety for our nocturnal players.

Dev Note: Always treated like a support weapon, but without the traits that make it successful as one (most support weapons sacrifice damage for accuracy or splash damage,) the Mini-chaingun is hard to justify bringing onto the battlefield over other LMG options. This update offers a significant boost to its 1v1 potential, and increases its overall ferocity.

Dev Note: We've made some adjustments to the chassis options to more dramatically alter how each of them makes the Javelin performs.

Hey there. In this month's update (on top of the bug fixes and NSO tuning,) we've reintroduced and rebranded the Victory Point system as Empire Strength. Doing this now sets us up for our big update later in Q1, gets players used to taking territories for strategic value (hint hint,) and alleviates the arbitrary "3 continent events then Meltdown" alert cycle we were in before. This cycle led to continents staying open for 5 hours or more if players were unable to achieve 41% territory control after the 3 continent events were complete. We'll be having a Livestream later this month (the 31st or sooner) to reveal all the hush-hush-super-secret stuff we've been working on, and will be announcing the Livestream date once we've got the full loop feeling cohesive. It's. Going. To. Be. Awesome. We'll continue teasing out some bits and pieces as we move closer to the announcement/release, so be sure to check www.twitter.com/planetside2 every now and again.