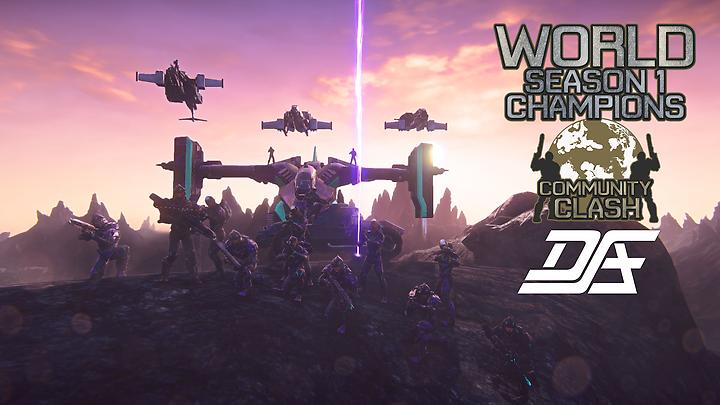 The PlanetSide 2 community has been cooking up various competitive brackets. Whether you’re into 12v12 with the Professional Arena League, 240v240+ with the PS2_PickUp crew, or 24v24 for Season 1 of PS2CommClash, there’s something that is certain to satisfy your PlanetSide 2 competitive palate.

It’s inspiring to see the community coming together to create these events, telling the story of each team and their battles against one another - the friendly rivalries, server pride, enticing tactics,  and so much more.

- DasAnfall on their US PS2CommClash Season 1 Regional Championship title, conquering in an 11-0 battle against No Nonsense Gamers.

- MercenaryS on their EU PS2CommClash Season 1 Regional Championship title, defeating INI Elite in a hotly contested match with a 4-2 victory.

…But who is the WORLD Champion you ask!? How could we not have a DasAnfall versus MercenaryS battle? You can watch the below clip to see the full battle for yourself!

At the start of Round 2 with a 2-2 score, one has to wonder which of these teams will prevail. Both of them, calculating every move and trying their best to outwit their enemy! After doing a live poll, the fan favorite was the MercenaryS, but DasAnfall makes a massive comeback, starting strong in Round 2 by distracting MercenaryS in the air while dropping two soldiers quickly on Chimney Rock Depot to contest the A point, and pull out sunderers. This spawn point advantage allows them to easily keep the point defended, but one has to give DasAnfall’s air crew a round of applause for guarding the sunderers that were well placed.

Immediately upon capturing Chimney Rock Depot, DasAnfall applies pressure to Heyoka Chemical Lab. This forward thinking and disciplined consummate provided them a large buffer, allowing DasAnfall to set up an offensive defense. MercenaryS had JUST dropped a whole crew onto Chimney Rock Depot, which they could no longer capture, leaving them with the decision – do they recall to defend, or send a few soldiers to re-secure the base?

The match ends in an EPIC back and forth between MercenaryS’ steel wall and DasAnfall’s aggressive insertion, but the early onslaught by DasAnfall in Round 2 proves to be the perfect advantage to secure the win with a 4-2 victory!

Congratulations DasAnfall, the FIRST PS2CommClash World Champions! Adorn your soldiers with your in-game Community Clash Season 1 World Champion Decal as a remembrance of your hard work and determination.

With that, the PS2CommClash Team would like to state, GREAT job to all the outfits that took part in Season 1.  Season 2 is in the works, so follow PS2CommClash’s Twitter and website to keep up to date.

We have a feeling that this is only the beginning! Follow the teams and events! If there’s something you want to see done that hasn’t been, maybe it’s time to start up your own competitive bracket! Don’t forget to let us know about it on the forums, Twitter, Facebook or Google Plus!