Your Guide to the New Construction System 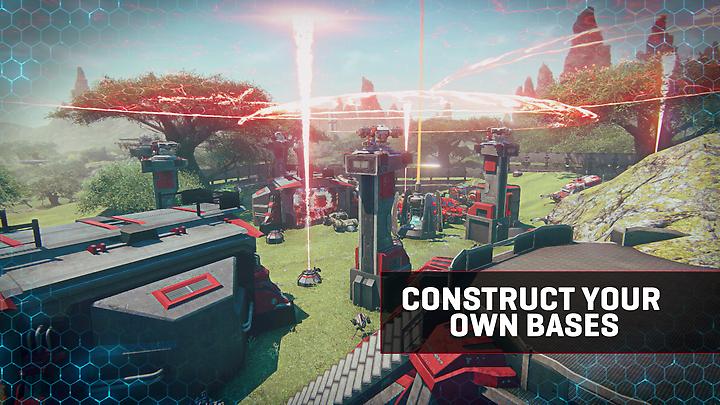 In case you missed it, the construction system is now live on PC! The discovery of the powerful new mineral Cortium has given rise to all new objects, tools, and vehicles – so here’s all the intel you’ll need to start building your way to victory!

ANTs
Players can summon an Advanced Nanite Transport (ANT) at any vehicle terminal. ANTs are 4-man transports that have mining lasers for harvesting Cortium nodes, which are scattered around the map. The ANT can be deployed at any time, which will reveal access to a building terminal from which you can equip and then place fortifications (at a cost to Cortium).

Placing Construction Objects
When placing fortifications, you can rotate the object using left or right click. Move the object closer or further from you by holding left and right click at the same time. Raise or lower an object by looking up or down without clicking the mouse. All objects have blue and green “placement points” which help the player determine the right height of an object. Blue points must be beneath the terrain, while green points must be above the terrain. When your object is in position, press “E” to place it.

Silos
A “Cortium Silo” can store large quantities of Cortium, and also “claims” the land for you and your squad. Claimed land means that players cannot deconstruct any of your fortifications with the “Decon Tool” (also found in the ANT terminal). ANTs can offload Cortium to friendly Silos using the same method as harvesting minerals: just approach the Silo and hold the firing button.

Powered Construction Objects
Some construction objects require a nearby Silo (with stored Cortium!) to remain active. Modules, for example, are constructs that can improve surrounding fortifications, but go offline if the Silo runs out of Cortium. While a module is near a Silo, Cortium will be drained automatically. The more objects that require power, the faster your Cortium Silo will drain.

HIVEs
Hardline Interference Volume Emitters or “HIVEs” are structures which can generate Victory Points over time. These structures also require a nearby Silo for power, but only when they are active. A HIVE becomes “active” when your faction has an available core.

Victory Cores
When a continent unlocks, each faction has a certain amount of cores available. By default, each faction gets 2 cores, with an additional core given to whichever faction unlocked the current continent. Cores are automatically placed in HIVEs closest to an enemy Warp Gate. The closer the HIVE is to an enemy Warp Gate, the faster it will generate Victory Points.

When an active HIVE is destroyed, the faction who destroyed it will recover that core for their faction, and it will then automatically activate the most ideal HIVE, provided another empty HIVE exists.

It’s worth noting that Silos must be restocked with Cortium constantly, as HIVEs, like modules, require an active power source to function. If a Silo runs out of Cortium, an active HIVE will no longer generate Victory Points.

Lastly, Victory Cores will occasionally jump from HIVE to HIVE. Cores gravitate to whichever HIVE is capable of generating the most Victory Points, but will not do so if there are too many enemies in the target region, and cores will also not leave a HIVE currently under attack.

By default, each player is given access to Rampart Walls, Bunkers, Anti-Infantry Phalanx Turrets, Silos, and Repair Modules as default construction objects, and HIVEs are also unlocked at Battle Rank 15 for free. New types of fortifications may be purchased with Certs or DBC.

All structures are much weaker while being constructed than they are when they’ve been completed, and at the moment, each structure type takes 45 seconds to complete.

Decon Tool
Can be used to deconstruct misplaced structures.

Bunker
Small, durable fortification with firing areas for infantry and an open area on top.

Cortium Silo
Small, durable, and provide power to a base. A single Silo can store up to 50,000 Cortium at a time. It also claims the nearby area for you and your squad, which prevents unsquadded allies from deconstructing nearby objects.

HIVE
Initially a vulnerable “chassis” when unpowered. While housing a Victory Core, the chassis becomes indestructible, and a small shielded area becomes the only point where it can receive damage. Active HIVEs generate Victory Points based on their proximity to the enemy Warp Gate, and require Cortium from a nearby Silo to operate.

Repair Module
Cortium-powered module which quickly repairs nearby structures. This is an extremely important component of any base.

Structure Shield Module
Cortium-powered module that creates one-way shields for most of the openings on Bunkers, Rampart Walls, and Sunderer Garages.

Turret AI Module
Cortium-powered module which provides nearby deployed turrets with automated tracking abilities, allowing them to fire on enemies who stray too close.

Ready soldiers? It’s time to put your new construction system training to test on the battlefield!

Previous
Build Your Way To Victory!
Next
Need a Boost? Now is the Time!