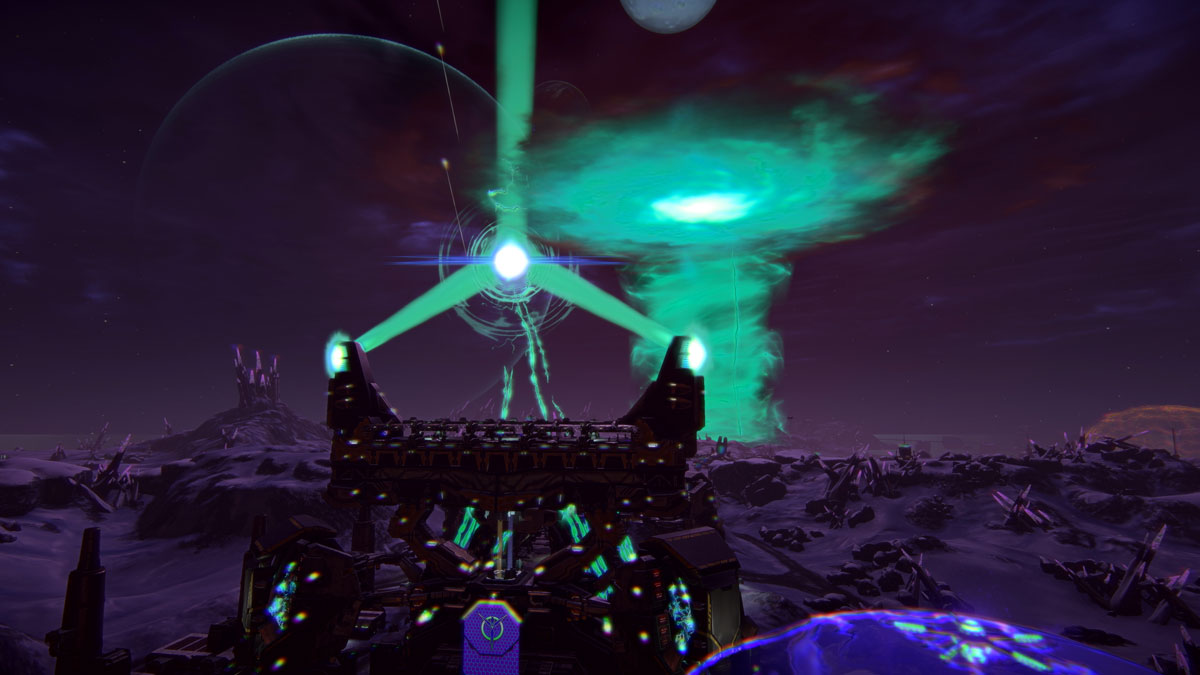 With the release of The Shattered Warpgate update, we made some ambitious changes to the game that add more structured elements to the sandbox experience we all know and love, while revamping the continent of Esamir. In this post I wanted to point out some observations surrounding the new additions, and the lessons we’ll be taking to heart moving forward.

Back when this all started, the original intent of this update was not a complete overhaul of Esamir, if you can believe it. We were initially focused on fixing Esamir’s imbalanced lattice and using the Warpgate’s detonation as a catalyst for storytelling. Buuuuuut, the more we did, the more we wanted to do, and Esamir ended up better for it overall.

Between the objectives created through Missions and Campaigns, the lack of limitations on Construction, and the Abandoned Vehicles scattered throughout that area, The Shattered Warpgate resulted in some of the most organic, intense, “PlanetSide” battles this game has seen in years. The feedback about the combat in this area has been extremely positive, and we’ll certainly want to pocket some of these concepts for use elsewhere later on.

Watching players struggle with figuring out where to go and what to do was pretty heartbreaking from my perspective, and undoubtedly frustrating from the player’s point of view. Not immediately force-pinning the starting campaign event to the player’s HUD left folks wandering around, trying to figure out who Foster was and where he was hidden; and the Analysis HUD seemed like an unnecessary extra step every place we tried to use it. These sorts of usability issues were a recurring theme. By seeing how players interacted with this system, our expectations versus the realities, we have a much better sense now of how to handle Chapter 2 when it rolls around.

There were some takeaways from the various events available during the first Chapter, the first of which is just how frustrating it can be to have your Campaign progress blocked by a bug. We’re dealing with new tech in some cases, and new ways to use old tech, in others, and we’ve learned a lot during this process on how to better deal with these challenges in later Chapters.

We originally designed this Chapter to give players breaks (if Esamir isn’t open, you come back when it is). That’s why our Chapters last a month, to give ample time to complete its events through fairly casual play. What we’ve seen though, is a ravenous desire to go, go, go, and complete each Chapter as quickly as possible, so we did end up unlocking Esamir for 24 hours for a while based on that feedback. This isn’t healthy for the game, however, and the potential for burnout is quite high, so moving forward we’re going to try to incorporate other continents into our Campaign events more often so that rotating continents becomes a more natural part of the Campaign’s completion. Whether or not we’ll be able to do that and make it fun is still a big question mark, but it’s something we want to try.

Feedback for the Mission system ranged anywhere from “these missions are boring” to “this is so cool.” There are a few different goals for the Mission system, like celebrating undervalued forms of gameplay, making more use of map space by creating new sub-objectives, and giving players tangible goals to complete during their session that offer rewards. During our first pass, the hand of missions you were dealt would vary wildly, which created some bad feels for the players who got a list of things they didn’t have an interest in. On top of that, there were some missions that would break or create inconsistent experiences.

In our second pass, we divvied up the mission spread more, and removed some of the less interesting/inconsistent missions so that players would be way more likely to find something they’re interested in.

It’s important that we don’t abandon the goal of creating new sub-objectives for players, but alongside that we’d also like to offer more missions that are in line with standard gameplay for the players who have an interest in that. You’ll be seeing these missions hit your pools in the next update.

Regarding rewards, we’re still discussing exactly where we want to go with this, and our intent remains to help new and casual players catch up to some of our more dedicated veterans. We did make some changes in the last update that increased the frequency most players would see ISO-4 and Certifications as rewards, so we feel like this is a good place to continue evaluating from.

Esamir’s storm is intended to be a force of nature that needs to be played around and while we’ve introduced ways to do that, through Insulated Armor/Insulated Plating/Reclaimed Vehicles/Neutralizer Device, we don’t necessarily want it to be the thing you have to worry about during off-peak hours when fights are already difficult to build up. To that end we’re going to prevent it from patrolling during times of low population, and it’ll hang out over the Shattered Warpgate so that players can continue to get their Campaign events done as needed.

Additionally, we’re going to try making the storm prioritize large fights with a population imbalance that favors attackers. So, for example, if your faction has a 60% or greater attacking population, the storm could target you to even the odds. One thing the storm does very well, is favor the defending faction.

Lastly, you will be seeing more ways to manipulate the storm come Chapter 2 (spoilers,) through things like the Lightning Arrester, Lightning Grenade, and other equipment we’ve yet to show. Ideally this becomes less of an inconvenience and more of an asset in the fight, while allowing us to further the story of the factional arms race amidst Esamir’s calamity.

One of the strengths of the Campaign system is that we can, with each Chapter, iterate based on the lessons we learn from the previous one. The river of feedback we’ve been swimming through over the past couple of weeks has been extremely helpful, and will play a big role in making not only future Chapters of the Campaign better, but also help elevate the game as a whole.

Previous
Rogue Planet Games Rallies For Extra Life!
Next
Nanite of the Living Dead VII: The Seeds Must Flow