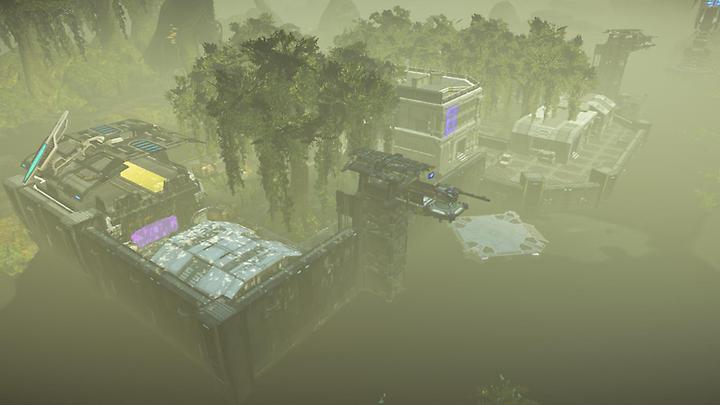 Development of the continent of Hossin began in December of 2012 and released on June 26th 2014. Why did it take so long? Well, along the way, we paused development to focus on overall game performance. That meant we reworked all three of our existing continents to make them run faster and we were given the unique opportunity to redesign almost every base (that’s around 250 bases!). During this process we learned a ton about how to tackle the unique challenges of PlanetSide 2 level design and we were able to apply those learnings to Hossin.

Here are some of the major milestones along the way to give you all some insight into the continent development process.

Hossin started with a robust map for continental flow. This was a much more thorough and detailed plan than what was done on the three launch continents. Geography was built around this map to optimize the combat flow and provide occlusion. Here is the map we started with, and that map overlaid with the launch map of Hossin. 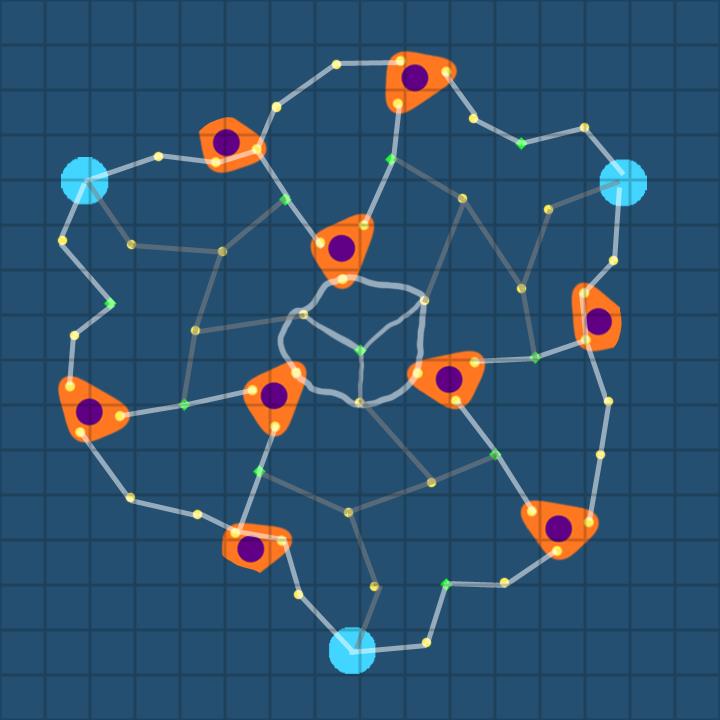 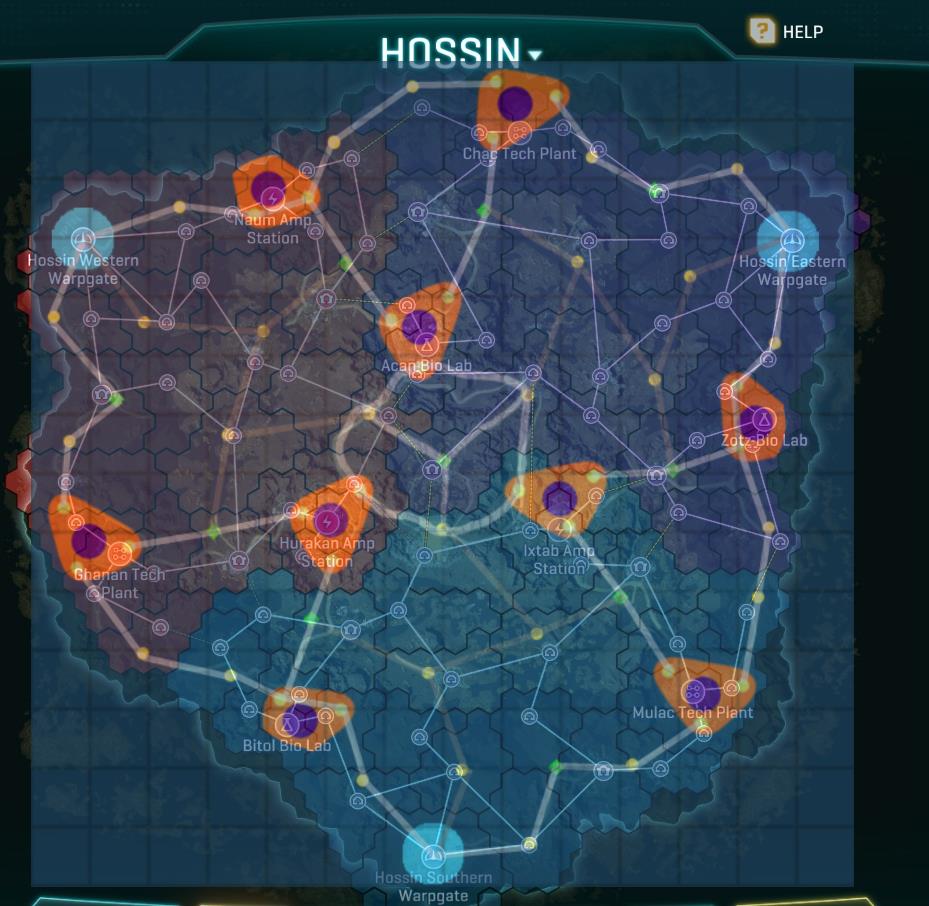 The geography was built with temporary textures and models, with large labels right on the map so the Level Designers knew exactly where to build. 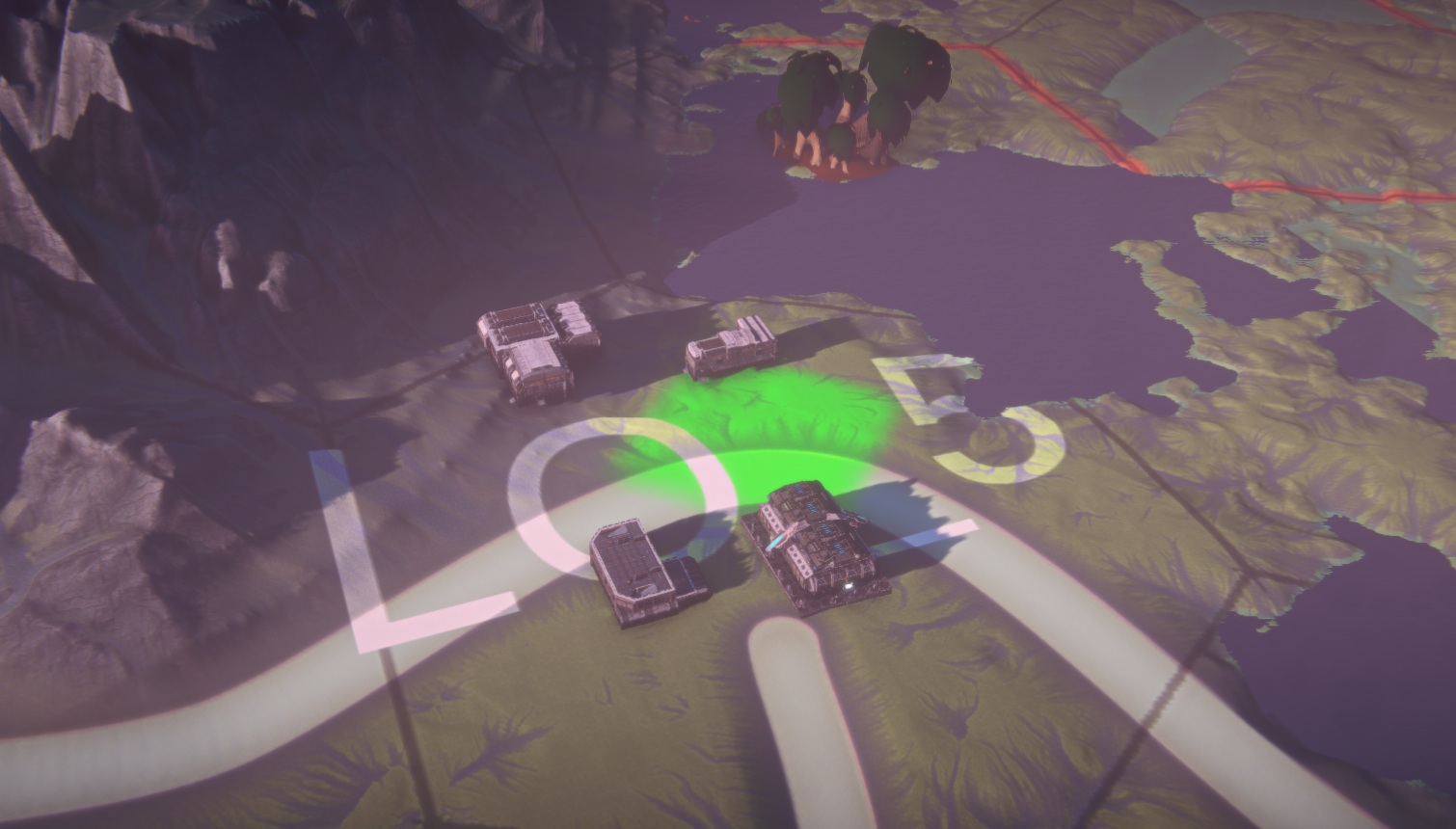 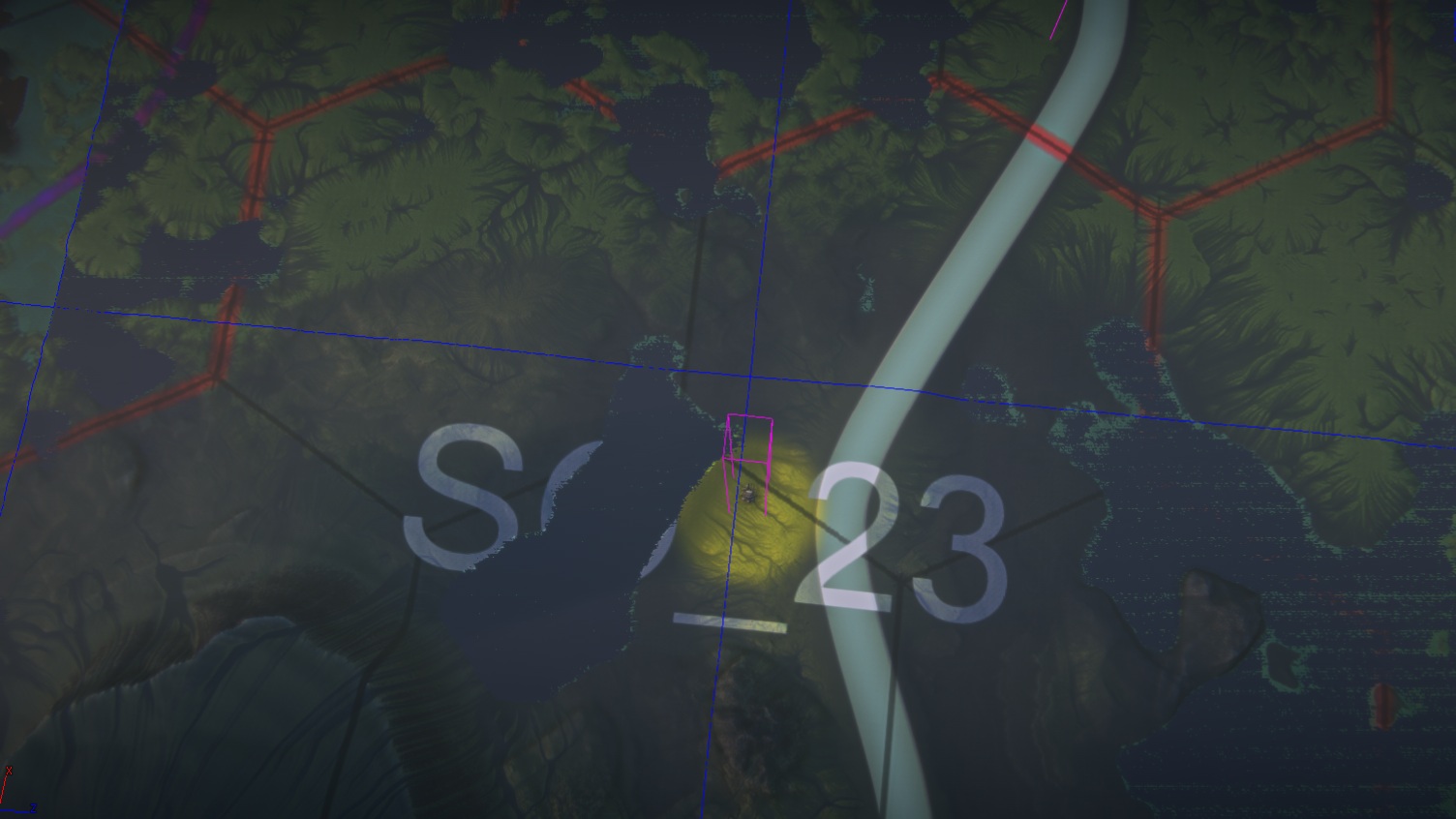 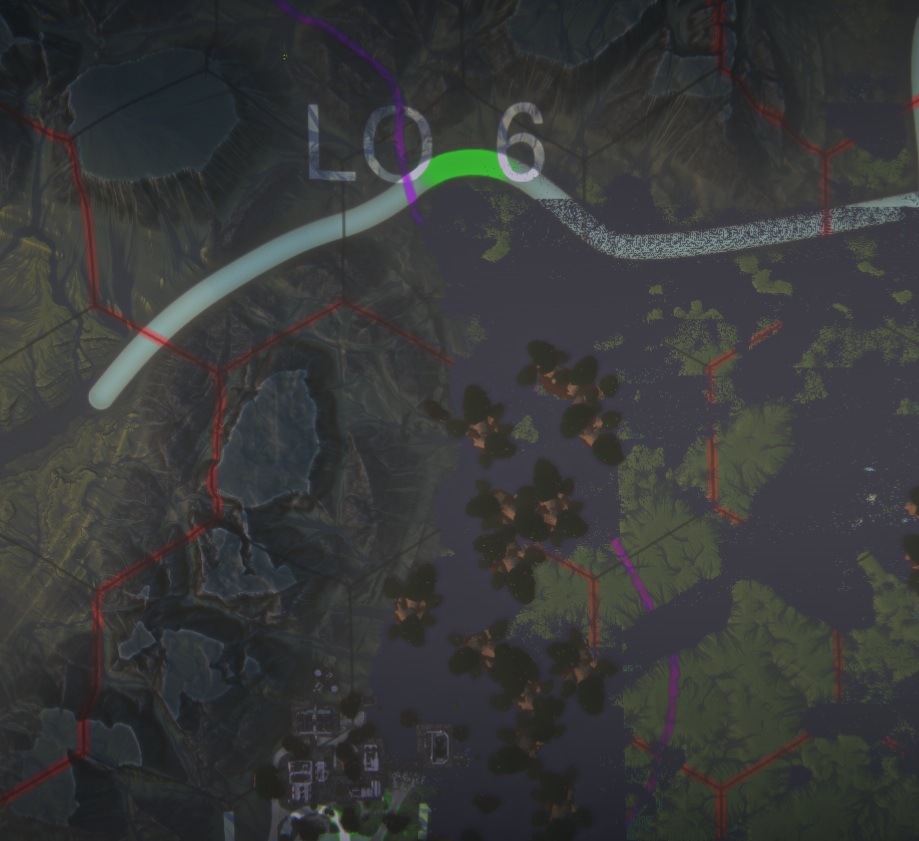 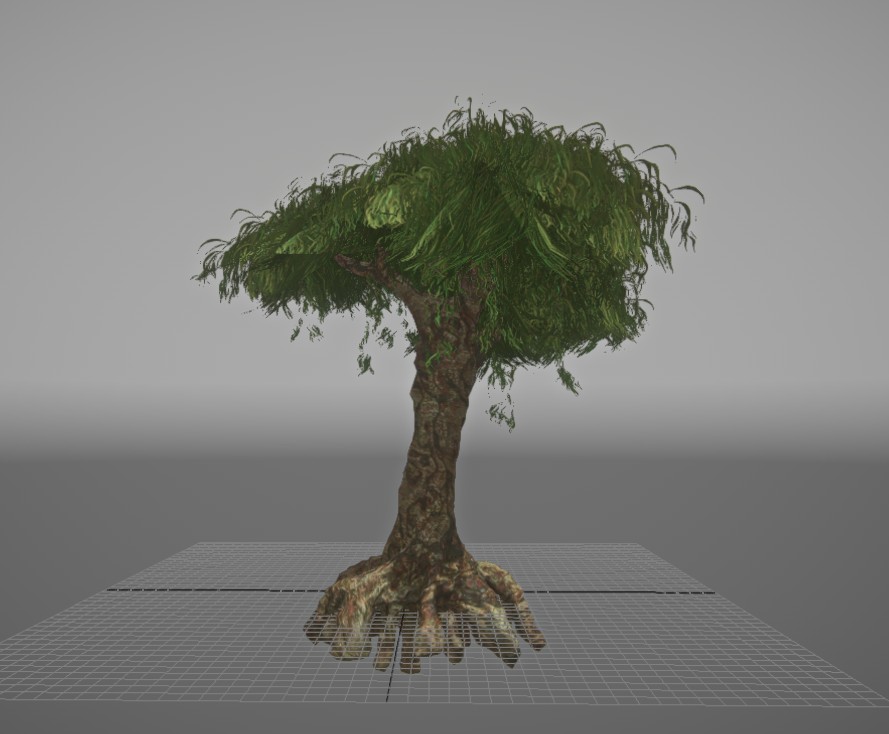 Once this early map was made, Level Designers began building bases in the appropriate places. This was just weeks after launch. We had a Level Design team ready to produce content, but we had not developed all of the best practices needed to produce the optimal gameplay experiences in Planetside PlanetSide 2.

We had to have water on Hossin. After all, a swamp without water is not a swamp. We also knew that there are significant technical challenges to making great water combat. So, we made the choice early on to have only knee deep water. You can see in the pictures above that the water was the first thing placed on the Hossin continent. The geography was made with this water level and depth pre-determined and strictly enforced.

Our Level Design team strove to create bases that integrated both the water and the trees on Hossin. We knew these were the two unique elements of our new continent, so we included them in our base design as much as possible.

Here is a nice sequence of pictures that illustrates the Level Design progress we went through for each base. You can see the early temp assets we had for trees, water and terrain texture. More important is the missing gameplay concepts in the final design. Notice the Spawn room totally exposed to vehicle fire and the vehicle terminal far away from the spawn room. Though acceptable at the time, we would later learn that this base would have been a nightmare to fight in if launched like this. 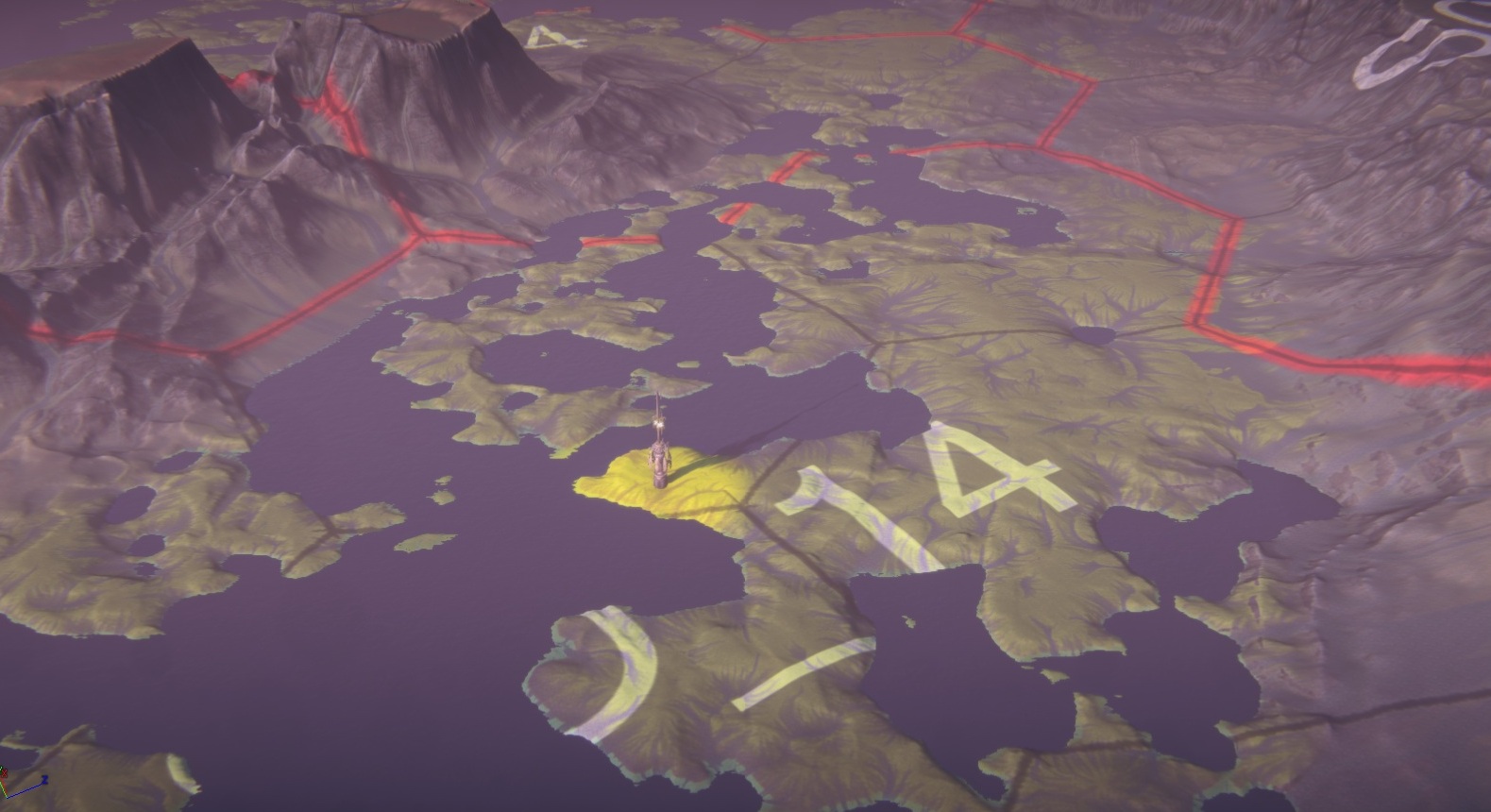 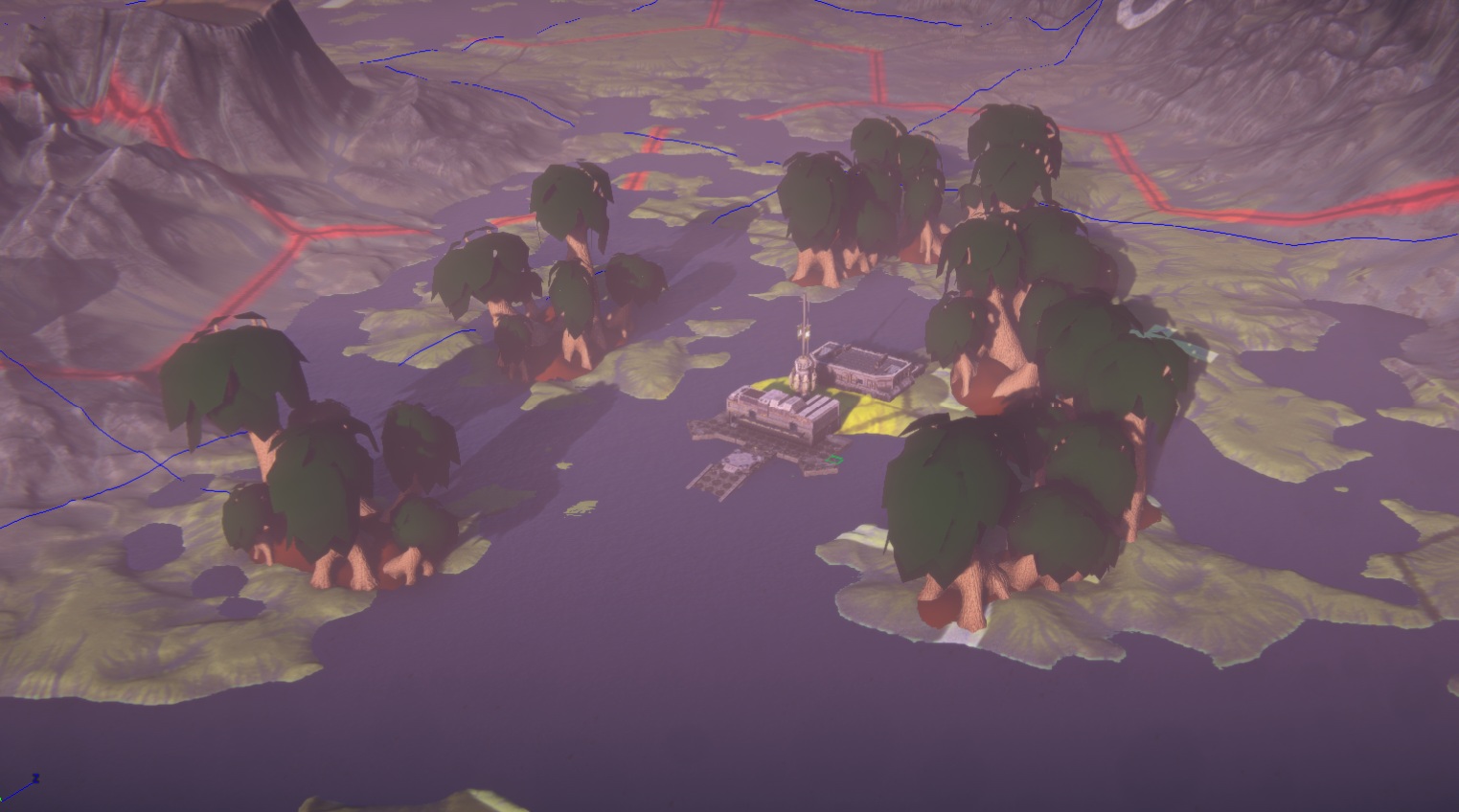 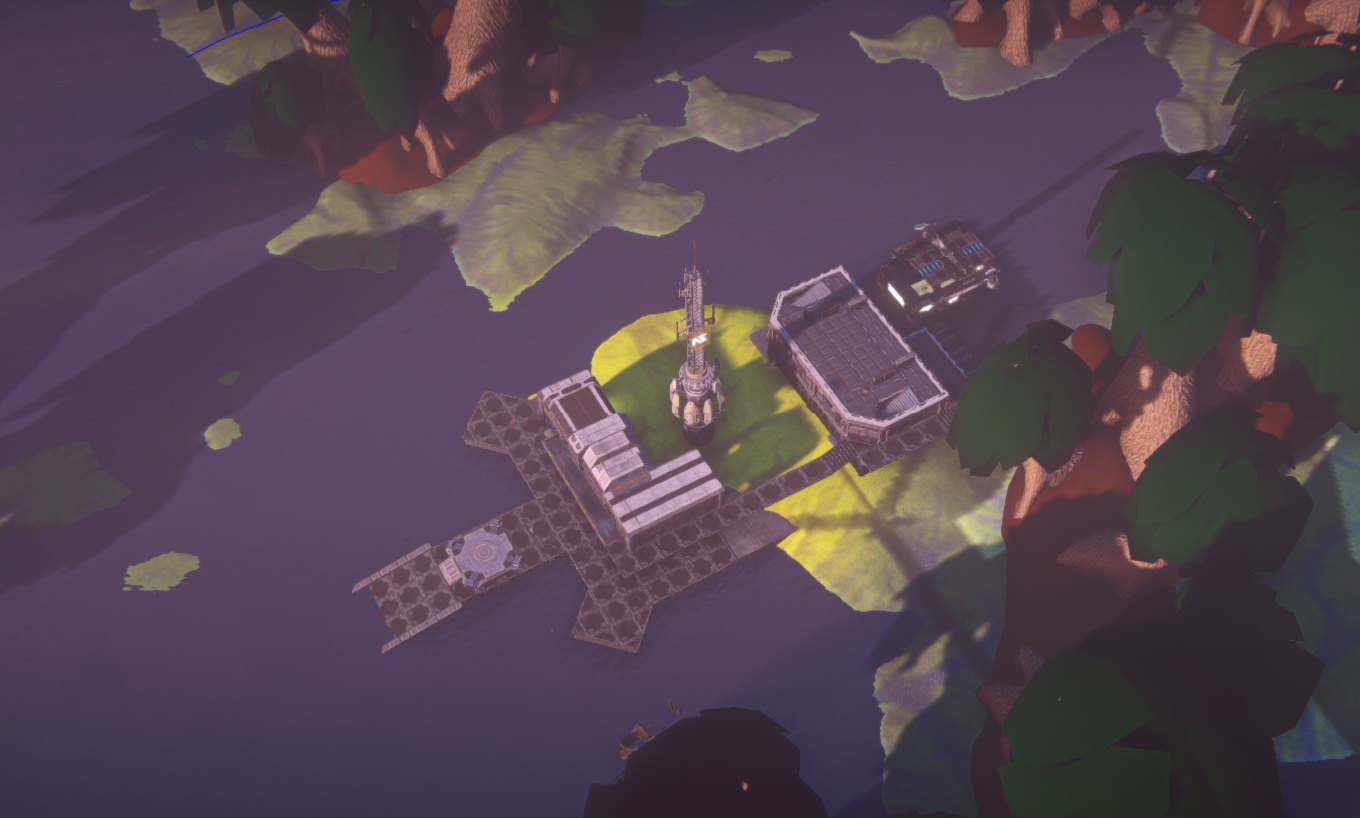 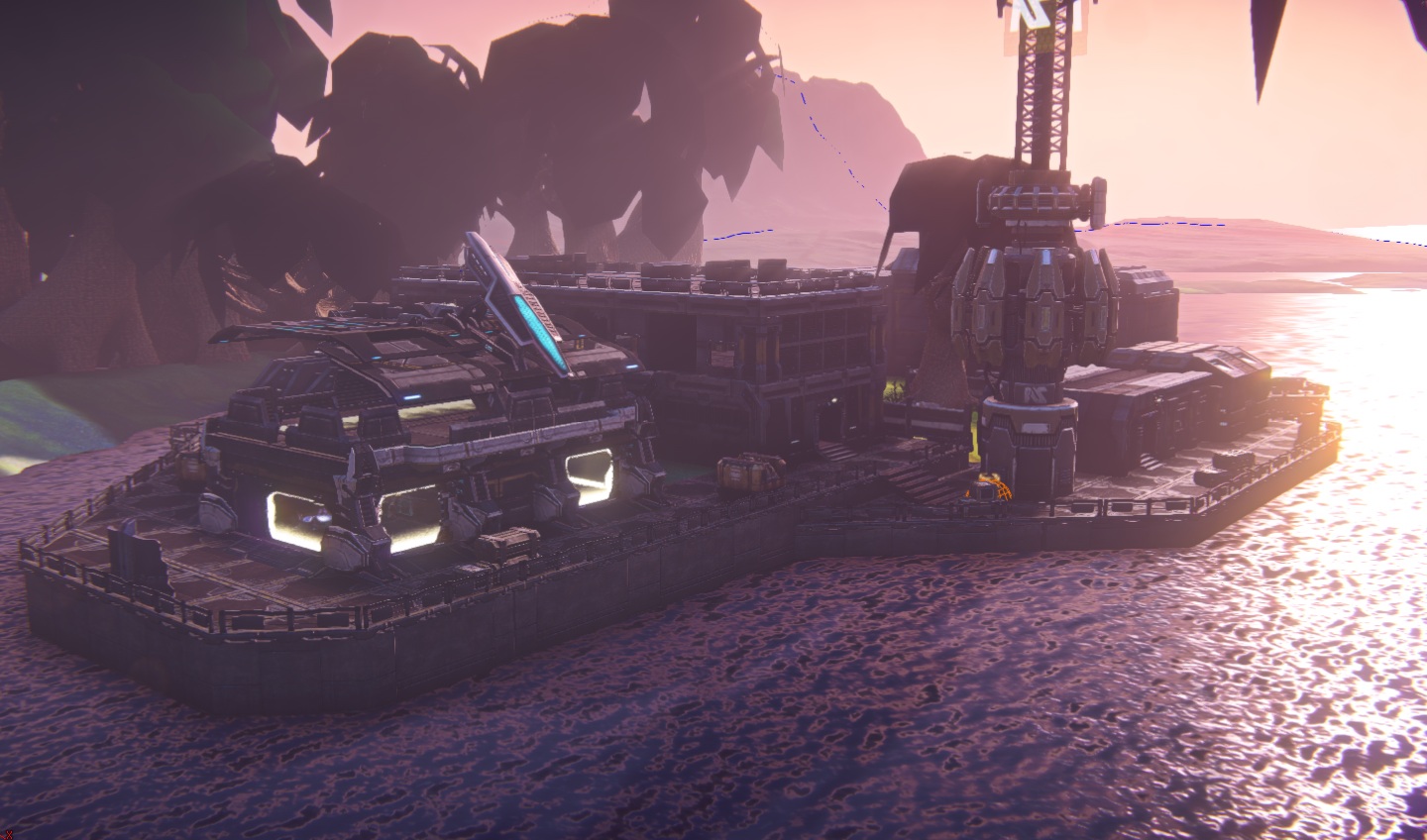 On the Test Server

In March of 2013 we put Hossin on the Public Test Server. But we knew the continent was not ready for a full testing pass. We created the Inner Ring of Hossin. We had temporary Warp Gates placed along the inner ring and made the outside edge of the continent non-playable space. We got a lot of good feedback from our dedicated players. Through bugs, data analysis and forum feedback we learned what worked and what didn’t with our initial pass on Hossin.

Our first lesson was that we were trying to push the engine way too hard. We took some steps that we thought would be just baby steps towards our performance goals.

First we pulled the fog plane way in. This was a win for the ambiance of Hossin, as the close fog makes the swamp feel much swampier.

Next we removed occlusion from many of the natural objects like trees and branches. This counter intuitive step made things run much smoother on the continent.

Finally we got much more aggressive with our LODs. Small bushes and grasses on Hossin disappear much sooner than on Indar or Amerish. The larger objects reduce in complexity much closer too. Fortunately the fog conceals this very well. We got great performance gains with very little visual impact overall.

These changes got us much farther than we expected. Framerates on Hossin are quite good. We did not need to compromise on the vegetation density we wanted to sell the swamp environment.

Still on the Test Server

Once we got this far, it became readily apparent that if we did not all take steps as a team to fix the performance of the game finishing Hossin would be irrelevant, since no one would be able to run the game. So, for the next few months we instead focused on the following work:

As painful as it was to let Hossin languish for so long on the Test Server, it was the right call to wait. We had to clean up our launch continents before putting out new material. And we had to address our overall gameplay performance issues before our aggressive plan for Hossin would work. This delay was a huge win for the quality of Hossin since we had that time to refine our level design concepts and processes.

Final Push
The extremely positive reception of the Amerish revamp gave the Level Design team renewed confidence. We knew we had finally honed in on a rule set that produced really good results. We were ready to tackle Hossin again.

We decided that we would release Hossin before it was “complete.” Our staged release plan would launch Hossin with some bases from the First Pass, basically untouched. Then we’d patch the continent in future updates to improve those bases. This let us focus on the areas of the continent which see the most action.

To fill out the continent we decided to try out the concept of “stampables”. We took some bases iterated them extensively and “stamped” them out in a bunch of different places. This saved us significant time without losing the density of bases that we planned for. The bases on Hossin named “Construction Site <Greek Letter>” are our stampables.

When it came closer and closer to time to release Hossin we decided the Interlink facility just wasn’t fun enough yet. We removed it and replaced it with the facilities we knew worked well. This enabled the team to focus on making the unique outposts more fun and smashing bugs.

As we assessed how the continent was looking we decided it was all too similar. Yes, it is the same biome, but we needed to get some visual differentiation into our swamp. We picked one asset that would be unique to different regions of the swamp. Here are assets and how we placed them. 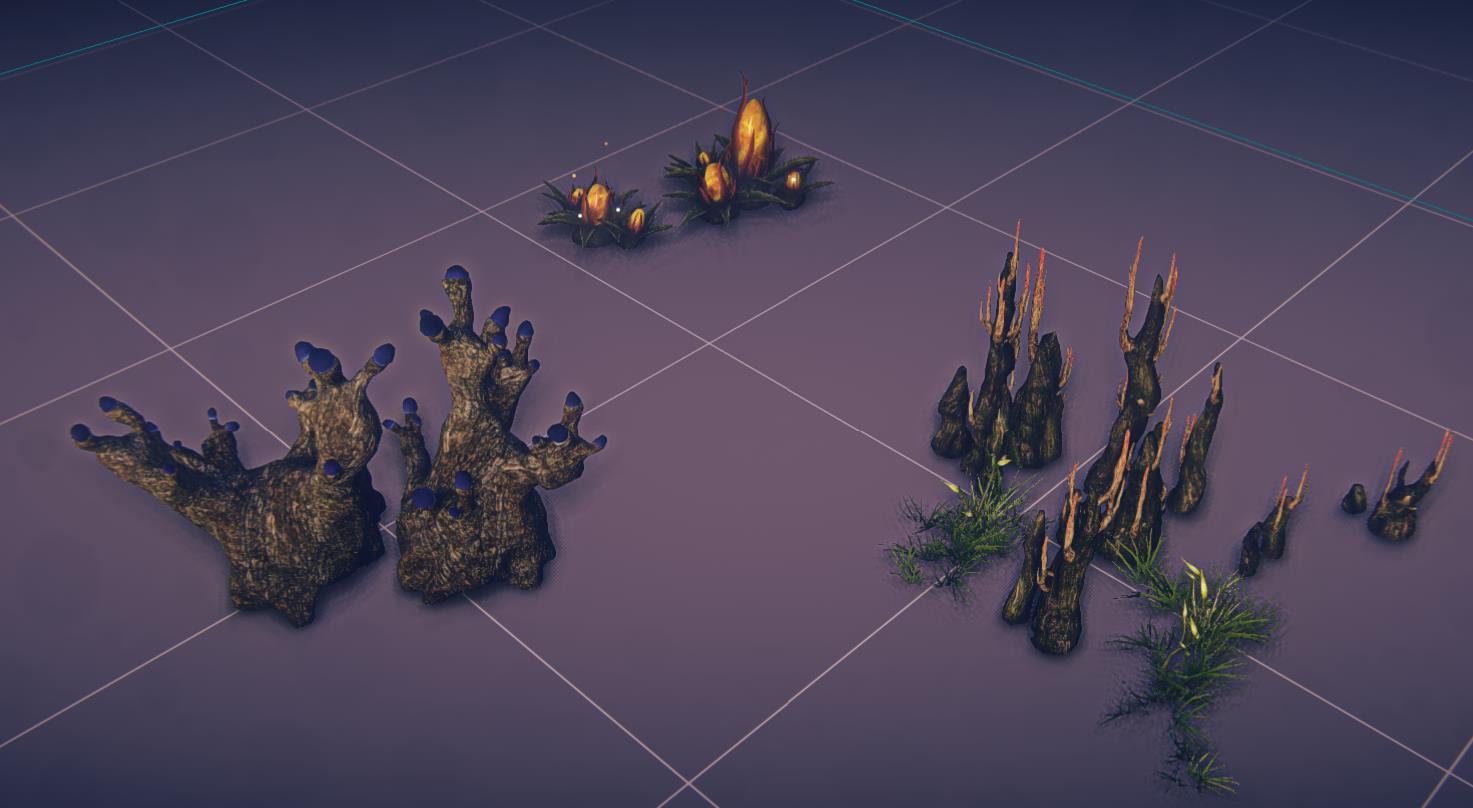 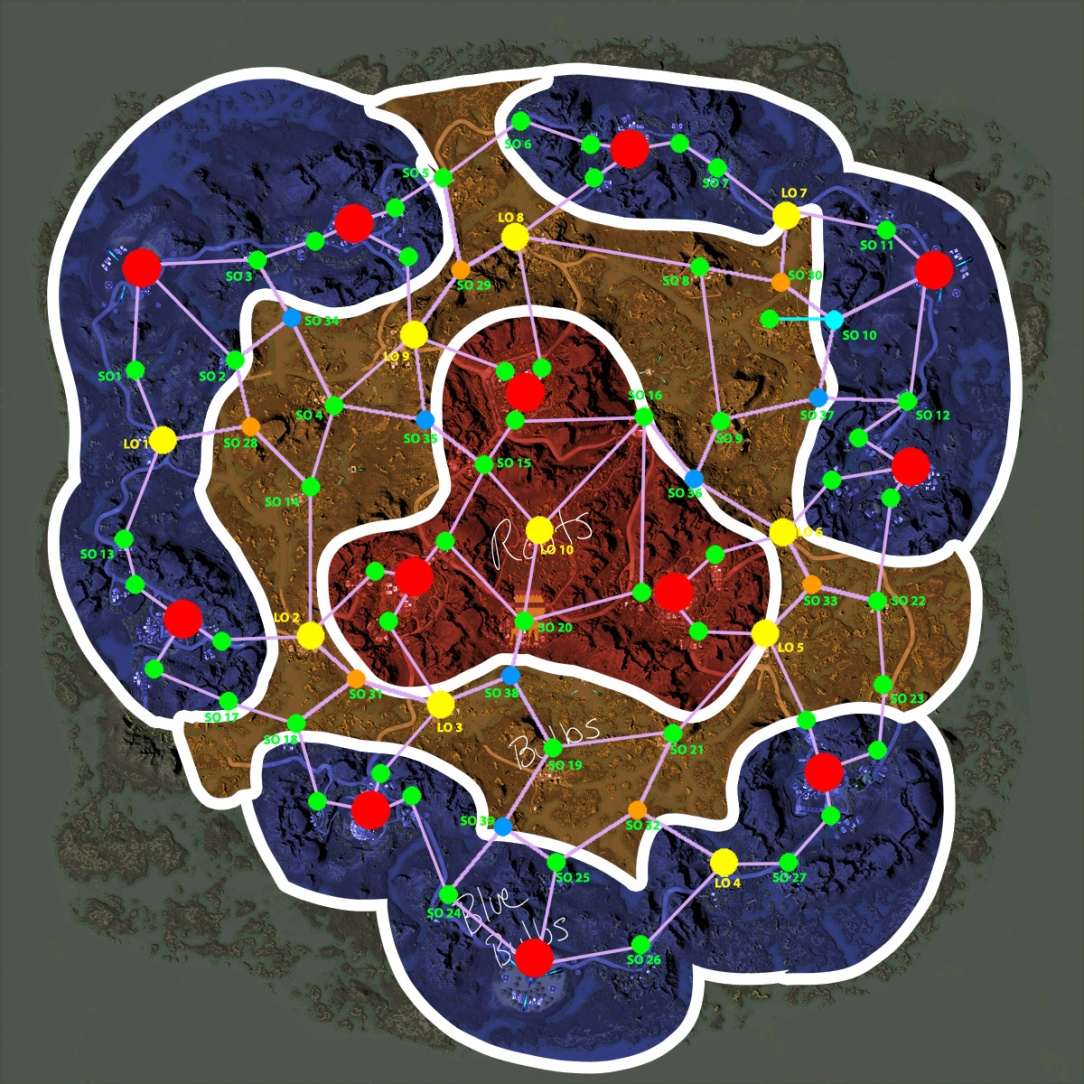 The blue piece went in the blue areas on the map, yellow in yellow and red in red. This gives the areas a more distinct feeling and helps you figure out where you are on the map.

Hossin bases contain all the aspects we learned through our revamps of Esamir and Amerish. Here is how the base from above (Iron Quay) turned out. 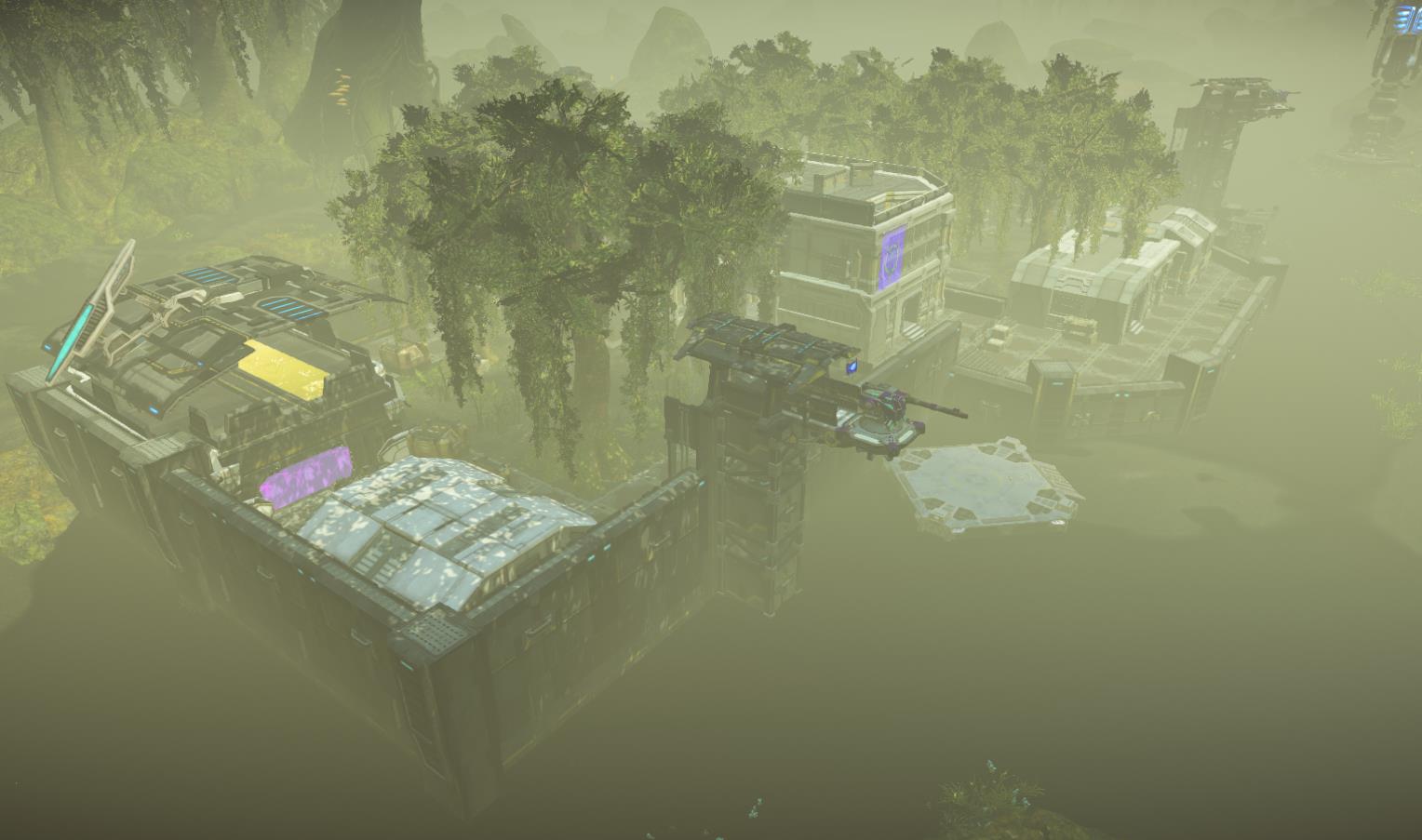 You can see the initial concept is still in place, but the design issues have been addressed. The spawn room is isolated with vehicle access nearby, and more air cover was added.

The reception of Hossin has been very positive. We are thrilled that our players like the continent, and it is only going to get better. We already have plans in place to redo the bases we consider outdated and to replace some of the stamped bases with unique designs. Time will tell, but so far our staged roll out of world content seems to be working successfully. 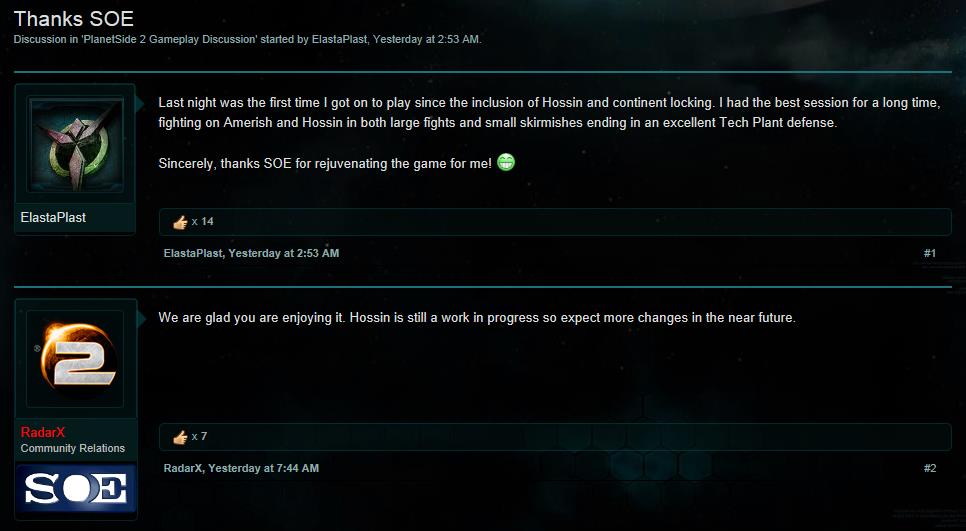 And don’t worry about the Interlink. We are still working on it. Look for it to appear on continents across Auraxis in the coming months.