Greetings, fair travelers! Welcome to another edition of Intel Brief. Slugger here. Today I would like to infect your mind with information pertaining to our most lovable oaf of war: the Mechanized Assault Exo-skeleton suit, or MAX for short. A hulking machine of death, this seemingly simple class can be frustratingly misleading in how it is best played. I hope to dispel some of the presumptions players make about the MAX, and ultimately make you the lean, mean, killing machine you've always dreamed of being ("lean" by killing-machine standards).

In case you have yet to familiarized yourself with this nightmare-inducing fellow, you should know the MAX has a few distinct strengths and weaknesses. First, this nanite giant is the slowest of all infantry, making it fairly incapable of giving chase or making hasty escapes. But this lack of speed comes with a thick, unyielding armor; so thick and unyielding, in fact, that it cannot regenerate itself and requires an Engineer to keep it maintained.

''But Slugger, why would anyone want to spend resources on a unit that seems so... well, balanced!“ The reason is simple. This metal beast has strengths that, when utilized to their fullest, are cause for terror. A MAX specialized in Anti-Infantry combat, for example, can defend a point against waves of enemies without fail. This is something other classes cannot hope to accomplish.

Let's begin by familiarizing ourselves with the various Anti-Infantry weapons available to the MAX. The Terran Republic has gigantic chainguns particularly good against large numbers of very close-range targets. The New Conglomerate have their infamous Scattercannon – a type of automatic shotgun – capable of dispatching single units extremely fast and relatively accurately. The Vanu, not surprisingly, have a hefty laser cannon that has the best accuracy of the three. The three empires also have access to a flame thrower, which I find to be similar in its usability to the Terran Republic's weapon, except even more effective at close range.

It's important to note that while the three empires have their “signature” weapons, there are variations for sale that are suitable for different playstyles. It would not be practical to list all of the variations here since there are so many, so I encourage you to take the time and go over your empire's specific options.

In addition to devastating weaponry, the MAX class has a special dashing ability useful in all sorts of situations. Providing the user with a short burst of forward momentum, this ability is excellent for evading danger, closing gaps, and generally making the opposition soil themselves. Furthermore, the MAX suit also has very big arms known for their ability to hit like a Sunderer, used by pressing the melee attack button. These arms, also much like a Sunderer, do not discriminate between friend or foe; use them with caution.

The default loadout of the MAX suit is an armor-piercing cannon on the left arm and an anti-infantry gun on the right. This is a solid loadout that, like most "default" loadouts, is fairly effective against both infantry and armor, and you’re welcome to take on infantry as is. That said, each weapon can be swapped individually, which allows the user to diversify or specialize in any number of loadouts to match an array of situations. 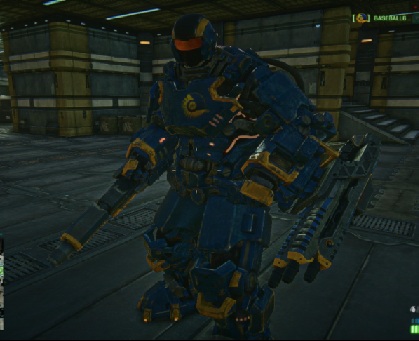 As we have already established, the Anti-infantry MAX is a giant, slow target with short-ranged weaponry. Not only that, but a specialized MAX will usually not be able to deal with anything but  infantry. The way I see it, this literally translates to ''Hey blockhead, stay in-doors and don't move around too much.'' This strategy is also known as ''Defending'' in Layman's terms, and that is by far the greatest strength of the MAX suit.

Yes, defending, or waiting in-doors for your opportunity to shred anyone who dares tread on your domain. Because this is your house, and you're not about to let any self-proclaimed ''heavy'' soldier come in there with their little rocket launchers and their ''large'' machine guns to blow up the place. By the way, those rocket launchers are going to leave a mark. Do make it a point to befriend an Engineer, and remember that without their support in repairs and ammo, you are not going to last very long. With their support however, anyone who tries to get past you is going to have a very difficult time.

If you’re crazy enough or patient enough, you can still use a MAX suit offensively with great success. You simply have to make sure you figure out where the frontline is, attach yourself to the nearest Engineer like a hungry parasite, and unleash the pain. Also keep in mind that your need for support may be greater when attacking, and that assaulting a base generally requires explosing oneself to enemy vehicles. Vehicles are a MAX suit's worst enemy, and unless you are equipped for fighting them, you should always avoid such confrontations.

Now let's get down to the nitty-gritty details and start talking about how to best specialize as a dedicated Anti-Infantry MAX and what you should consider spending your hard-earned cert points on:

While the Anti-Vehicular weapons that come pre-installed on MAX units create a pleasant balance, they are not what you are looking for if you choose to specialize in infantry combat. I personally go for the slightly longer-ranged AI weapons (such as the MRC3 Mercy, Mattock, or Cosmos) to make sure I can deal with those who think they can take me down by creating a bit of distance. In case you are wondering why they haven't invented more accurate weapons for the MAX, know they have indeed tried but always came up with the same problem: the guns were too accurate. Since this makes complete sense I will not take the time to elaborate and instead move on.

Much like zombies, a fast-moving MAX is significantly more terrifying than a slow-moving MAX. Improve your ability to close distances and get in (and possibly through) your enemy's face with a reduced timer on your Charge ability.

Do not let the burstiness of explosives get the better of you. This upgrade reduces incoming damage from explosions by a significant chunk, allowing you a chance to retreat for repairs as opposed to wait for a resurrection.

Since ideally you'll be giving a piggy-back ride to your personal Engineer most of the time, this one is sort of a low priority. But hey, statistically speaking players with bullets are more likely to score kills than those without bullets, so no harm and upgrading your reserves.

There is nothing more rewarding than playing a MAX correctly. It is a class like no other, exchanging any level of utility for pure unsaturated firepower and armor. It is a class which has the ability to change the tides of battle. However, even a class as powerful as this requires thought and coordination in a game like PlanetSide 2, so always make sure you are working with your team and thinking ahead before buying a suit. And remember, nothing will ever be as satisfying as slapping a wimpy infiltrator's head clean off his shoulders.