How to Guide your Newb to Success Part 2

Welcome to another installation of Intel Brief! Today we will be completing our previous tale of two-player glory and grandeur, where we discussed some of the better tactics suitable for the absolute beginner. If you haven't had a chance to read the first installment of this article, I suggest you start there. If you have, and for some reason have not sworn off reading internet articles, then allow me to refresh your mind on where we left off.

Level one discussed the absolute beginner; the player who just dropped into a hot mess and doesn't know his Liberator from his Reaver. But with a trusty guide and a scoped weapon, even he can score a few kills and move up the Battle Rank ladder. Level two assumed a basic understanding of infantry combat and moved towards teaching a more complex aspect of Auraxis: vehicular combat. While it wasn't recommended to have your newbie friend pilot his new vehicle quite yet, placing him in an upgraded gunner seat and taking him on explosive joyrides was determined to be both fun and educational.

Now that your friend has a solid number of hours under his belt and a basic understanding of both vehicles and infantry, it's time to pull him out of a "safe" learning environment and place him in a situation where truly, he is a master of his own domain – or at least feels like it. Now is the time to spread  the responsibility more evenly between the guide and the newbie, making both sides just as effective. I like to call it...

Some classes in PlanetSide 2 perform very well on their own. An example would be a Skyguard variant of a Lightning, or a skilled Heavy with his accurate launcher. These classes tend to have a particular set of skills or specialization that makes them effective even when solo. The Skyguard is effective at destroying air units (duh), while the Heavy can take down enemy vehicles single-handedly, given the right circumstances. So as the old joke goes, what's better than one rocket launcher? Why, two rocket launchers of course.

Two class pairings I find particularly effective are Medics and Skyguards. There are tons of potential classes and vehicles to pair together, but these are by far my favorite. Since we have already poked at the Skyguard a bit, let's begin by expanding on it.

The ability to play a Skyguard rarely depends on sweet driving skills and twitch reflexes, and more often relies on attentiveness and effective positioning. Even though this weapon is designed specifically for destroying aircrafts, it relies mostly on pilot mistakes to obtain kills. More often than not, your prey will be able to get away and at best, you will receive an assist after one of your teammates finally brings the target down. Don't get me wrong, it's not that the Skyguard is not effective! it's excellent at what it does. But it's designed for "guarding the skies", not "evaporate anything that dares fly over its head."

So what happens when you take two Skyguards, put coordinated friends in them, and give them great communication skills? If all goes as planned, it should rain aircraft chunks and fleshy bits within minutes. The Skyguard is one of the tools in PlanetSide 2 that benefits immensely from teamwork and coordination, and I highly recommend giving this tactic a shot for complete air superiority.

Ever notice ambulances always come with two medics? They come in pairs for a good reason.  One is there in case the other needs firing cover or a quick revive. This almost entirely truthful fact brings me to my next style: double Medics. Excellent for urban combat and capturing objectives, two Medics rely on tactical positioning and tight communication in order to succeed. Unfortunately, since the Medic weapons arsenal is fairly limited, this style also requires actual skill (It's level 3 for a reason.)

A Medic's signature move is the ability to heal and revive his comrades. This ability is what makes two Medics such a deadly combination; if one Medic falls, the other can bring him back up. The challenge is keeping at least one Medic alive at all times. The best way to accomplish this is to maintain a bit of distance and essentially use one medic as a frontline, though honestly, survival is a skill one has to learn through experience.

For this style, I recommend picking up a few particular certs. First, an ammunition belt is highly recommended. When you've got two Medics healing one another, you'll quickly find that ammo is the limiting factor. Secondly, C4. Two Medics do not have the ability to combat vehicles at all, and this will at least give you a chance – especially if your friend is willing to serve as a distraction. (Rember, if he dies in the process you can always revive him. Also remember that at the end you will be the one with the vehicle kill and a revive bonus, so pretend to be thankful.) 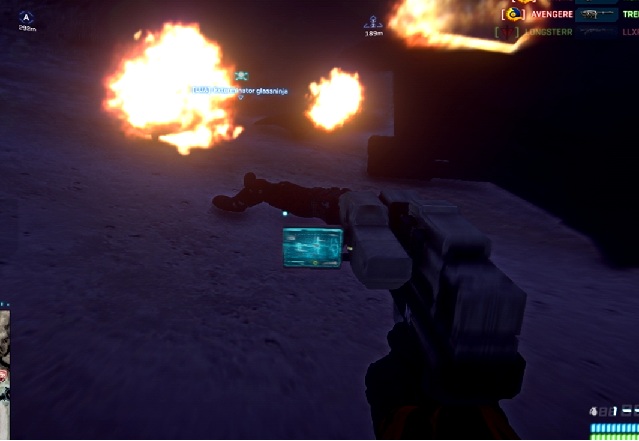 There are many other vehicles and classes that are effective when doubled, and I strongly urge you to experiment with as many as you can. Once you and your friend are done racking up kills and receiving the "Bad Enough Dudes" award from the president of your empire, consider moving to the fourth and final level of team play...

"Racking kills" and "making a difference" are not synonymous. Sometimes they overlap, but often they do not. Camping a spawn room will never be as fruitful (or honorable, for that matter) as destroying Liberator that's bombarding your courtyard. If you want to make a difference, you have to play smart and play hard.

So how can two players make an actual difference? It's not going to be easy, but it's possible. The idea behind an "army of two" is balance. A real army has an array of tools that together create a well-oiled machine. When you only have two soldiers, you need to create balance on a smaller scale. An example would be heavy tank rushing the frontlines with a sniper watching his back, or an anti-air fighter jet watching the tail of a loaded Liberator. Find the weakness in a powerful tool, and have your friend patch it up.

When I think of balance, there's a particular pair of units that immediately jumps to mind: A MAX and his Engineer. One is a war machine with immense firepower capable of breaking through frontlines. The other, a nerd with a futuristic glue gun that makes the strong even stronger. Together, they form a cluster of pain that shifts the tides of war.

This is a playstyle that has a lot of elements to it, specifically because of how versatile the MAX unit can be. It can be effectively used to combat air units, infantry, and even vehicles. So instead of merely scratching the cold metallic surface of this powerful beast, next week's article will be dedicated to it. We'll talk about the MAX unit's strengths, weaknesses, and how to make the most out of an Engineer by your side. There's a lot of good stuff planned for that one, so be sure to tune in!