Remember that one kid back in highschool who set the standard for "nerdy"? You know, the one with the fanny pack full of "Spells: The Assembly" cards or whatever they were called. Prancing about in his socks and sandals, he had the audacity to be proud of his awkward laughter and terrible skin hygiene. Why? Because he wasn't just concerningly smart, he was also quite helpful. See, in a desperate cry for attention outside his online circle, he tried to make himself a reliable handy-man and fixer-upper. 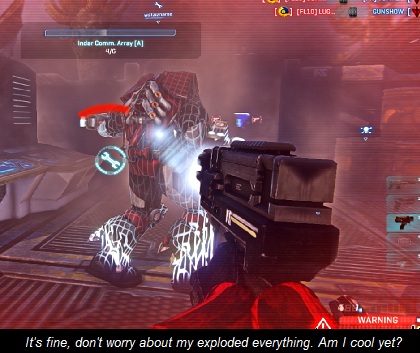 Things haven't changed much since those early high school years. That kid went off to graduate from a prestigious university with a degree in engineering. He's still doing nice things for other people, too. Some say he pushed it a little too far, mainly because nobody actually remembers his name anymore. We just call him "Engineer", but he doesn't seem to mind. Today I'd like to talk a little about our supportive gun-wielding nerdling, and especially about the various gadgetry he tends to carry.

If the question of "how to be an effective Engineer" was a mathematical equation, you'd need three semesters of linear algebra just to discover no solution exists. From your current location, to the role you want to fill, the Engineer has a different playstyle and a different set of tools for every job. Today I would like to focus on the Engineer as a support class, showing some of the ways it can aid others in combat without exploding into bits in the process.

The Engineer is a versatile class that specializes in demolition and defense. By default, an Engineer carries a Carbine assault rifle, a deployable anti-infantry manned sentry, an armor repairing tool (usable on both vehicles and MAX units), and an ammunition package. Two of those things scream "support!" and one of those things screams "defense!", so the way I see it the default loadout begs the engineer to "support defensively."

Your standard Engineer carbine is extremely customizable and well-rounded, and can be effective in all ranges (with the exception of the sniper-dominated "very long".) When playing an indoors support role, I personally go for a short-ranged loadout containing these upgrades:

This will help you stay alive between dropping ammunition packages and fixing up MAX units. If you find yourself outdoors, you might want to switch things up and go with these upgrades:

Even with all of these range-oriented upgrades, don't expect to outgun Heavies or Medics also geared towards long range accuracy, since technically they will have higher firepower. Nevertheless, this loadout will give you more than a fighting chance in the great outdoors.

Ah yes, what is an Engineer without a slew of gadgets? (answer: a Light Assault with a broken jetpack.) Each device can be used to sustain your frontline beyond the individual soldier's capabilities. An Engineer who keeps his teammates in mind will be showered with experience and the swooning gratitude of his admiring fans. 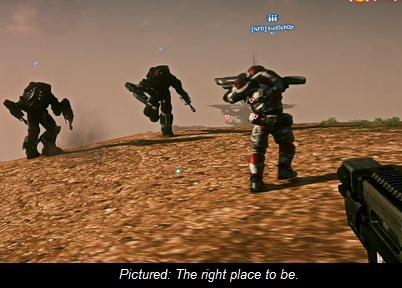 Ammunition package – Don't wait for your comrades to ask for ammo to place one of these down. It doesn't cost you anything and can generate a ton of free experience under the right situation. See a wad of friendlies sitting in a corner? Drop a bag of soldier-chow and watch the experience ticker go wild. Anti-air MAX units congregating on a comfy hill? Make sure they stay there for a good, long time by giving them all the ammunition they need.

Repair tool – Just a few tips for this one. First, MAX units rely on your assistance to be effective, so please consider watching their backs and fixing it up while you're there. Secondly, if you're going to be fixing friendly vehicles, do the Engineer dance while you're at it. It's a rather simple move, consisting of a movement to the left, followed by a movement to the right, then back to the left again. Repeat these moves until your vehicle is repaired if you want to keep snipers from giving your head a high velocity poke. Oh, and never repair a vehicle from behind, lest the only gratitude you will receive from the driver is a short trip to your spawn room.

Suit upgade: Flak armor – Vehicles have this weird tendency to attract explosions. Whether you're fixing your own vehicle or a friend's, this upgrade can mean the difference between life and death for an Engineer playing his role. It also compliments the use of anti-vehicular MANA turrets, which tends to attract vehicular fire. If you've got the funds, upgrade your armor as much as you can – up to a 50% damage reduction. 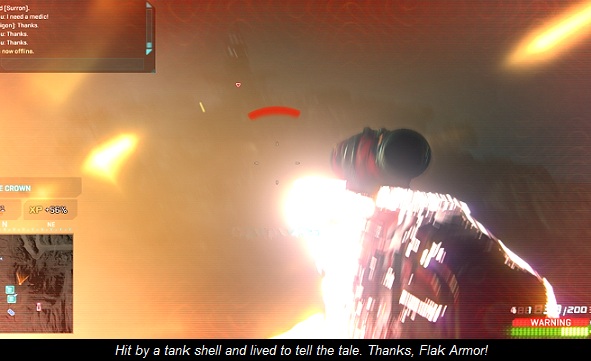 Sticky grenades – To be completely honest, these are just plain fun. They are very good at guaranteeing your grenades will explode exactly where you want them to, assuming your aim is not terrible. At the very least they can prevent your bad throws from landing back at your feet (unless your throws are really bad.)

It can be tough to know when to roll an Engineer, other than the obvious "when purchasing a vehicle." To get the most out of this class, you must surround yourself with non-Engineers dying for your support (literally.) As such, I find two particular scenarios to be the most suitable for an Engineer. The first one is when defending an objective. This usually causes other players to remain fairly stationary, or at least within a certain vicinity. MAX units are also more commonly used when defending, and no unit is as reliant on the Engineer as the MAX. Remember, dropping an ammunition box near a group of friendly units will often provide abundant rewards.

The second scenario is when attacking. To do well, your empire's offensive forces must be formidable and in urban settings – preferrably indoors. Again, an Engineer without his commrades is nothing, and commrades without an Engineer are nothing. Or so the Engineer tells himself.

Don't let the Engineer's acne-riddled exterior deter you from giving him a try outside beyond the cold, dark confines of a vehicle. He is as useful outside of a tank as he is in it, dishing out the pain in the form of ammo and fururistic nano-glue. He can be the cornerstone of a relentless attack or vigilant defense, even if his ability to aim a rifle is subpar because he forgot his prescription goggles at home.