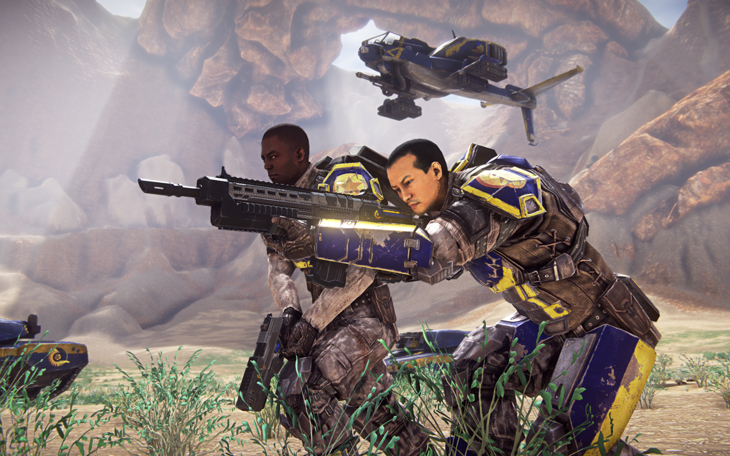 These are words often associated with the New Conglomerate, one of the three major powers fighting for supremacy on the battlefields of Auraxis in Planetside® 2.

However, to many the New Conglomerate are something else entirely: Heroes.  Freedom Fighters.  Protectors.

The New Conglomerate value freedom above all else and see anything that encroaches upon freedom as an affront to their fundamental rights.  Originally founded by some of the most powerful corporations on Earth as a political entity working against some of the restrictive policies of the Terran Republic the New Conglomerate’s “spirit of opposition” has only increased in the intervening centuries.  Now an empire in their own right they are in total open war with both the Terran Republic and the Vanu Sovereignty, seeking to free humanity from the tyrannical grip of the former, and defend them from the fanatical alien influence of the later.

Since the start of hostilities, the unpredictable and ruthless tactics employed by the insurgent N.C. have allowed them to gain significant ground against the seemingly overwhelming T.R. military.  Their methodology is to achieve victory by any means necessary and they are not afraid to use experimental weaponry, guerilla tactics or unconventional warfare if the need arises.

While they’re not blessed with the infinite resources of the Terran Republic, the N.C. have managed to build up enormous reserves of weapons, armor and vehicles which they keep well maintained.  Their equipment might not be the prettiest on the battlefield, but the N.C. philosophy is that as long as it shoots straight or can take a pounding that’s what really counts.  This gives them access to an incredibly diverse range of weapons and gadgets to help get the job done.

From a gameplay perspective, the Blue and Gold are built around hitting first, hitting hardest and taking a beating.  Although their weapons might not have the most finesse (often having strong kick, long reload times, and slower firing rates) they do pack a hell of a punch.  The empire specific vehicles, the Reaver attack fighter and Vanguard medium battle tank pack on more armaments and armor as well as abilities that allow them to stay in battle longer than the other empires equivalents.  While the N.C. vehicles excel in durability and sheer firepower, their trade off is in mobility and speed.

Check back over the next couple weeks as we release new info about the New Conglomerate, their weapons, vehicles and more.  As always, we’ll be answering your N.C. questions on Facebook and Twitter, so log on and hit us up, we can’t wait to hear from you!