Hey there, folks. With the summer months right around the corner, I wanted to revisit the roadmap with an eye to what's currently in development, and what you'll see in the next leg of PS2's development.

But first, let's take a moment to talk about a couple hurdles we've been dealing with since roughly around the time of the Arsenal Update.

G15 errors: Over the past few weeks, we've added loads of logging, pored over code submissions, and continue to search for the source of our G15 issues. A G15 is the error you see when you can't connect through your "gateway" to the server. This is not something that's wrong with your computer or connection. The only "fix" is to wait for a while and try again later. However, we do have a bandaid in place that should cut down on G15 issues substantially, by shutting down broken gateways after enough connections get stuck on it.

Network issues: For players who make use of the Deutsche Telekom ISP (primarily Cobalt/Miller players,) we've made some routing changes late last week that should have resolved the major connection issues through that ISP. For Connery players experiencing high latency, we're still trying to track down where the impact is. To that end, please submit tickets to CS using the following information when latency issues take place: https://help.daybreakgames.com/hc/en-us/categories/204228447-PLANETSIDE-2 We need your character name, server, time of incident, ISP, and PC specs, if you can provide them. There have been relatively few players doing this at this point, despite it being helpful to resolve these issues.

As a side note, resolving the above issues and developing the roadmap are done in parallel. The team members devoted to one are not actively developing the other. Thought that was worth mentioning, given some of the discourse I've seen surrounding these events.

Speaking of the roadmap, let's check back in on how things are going. 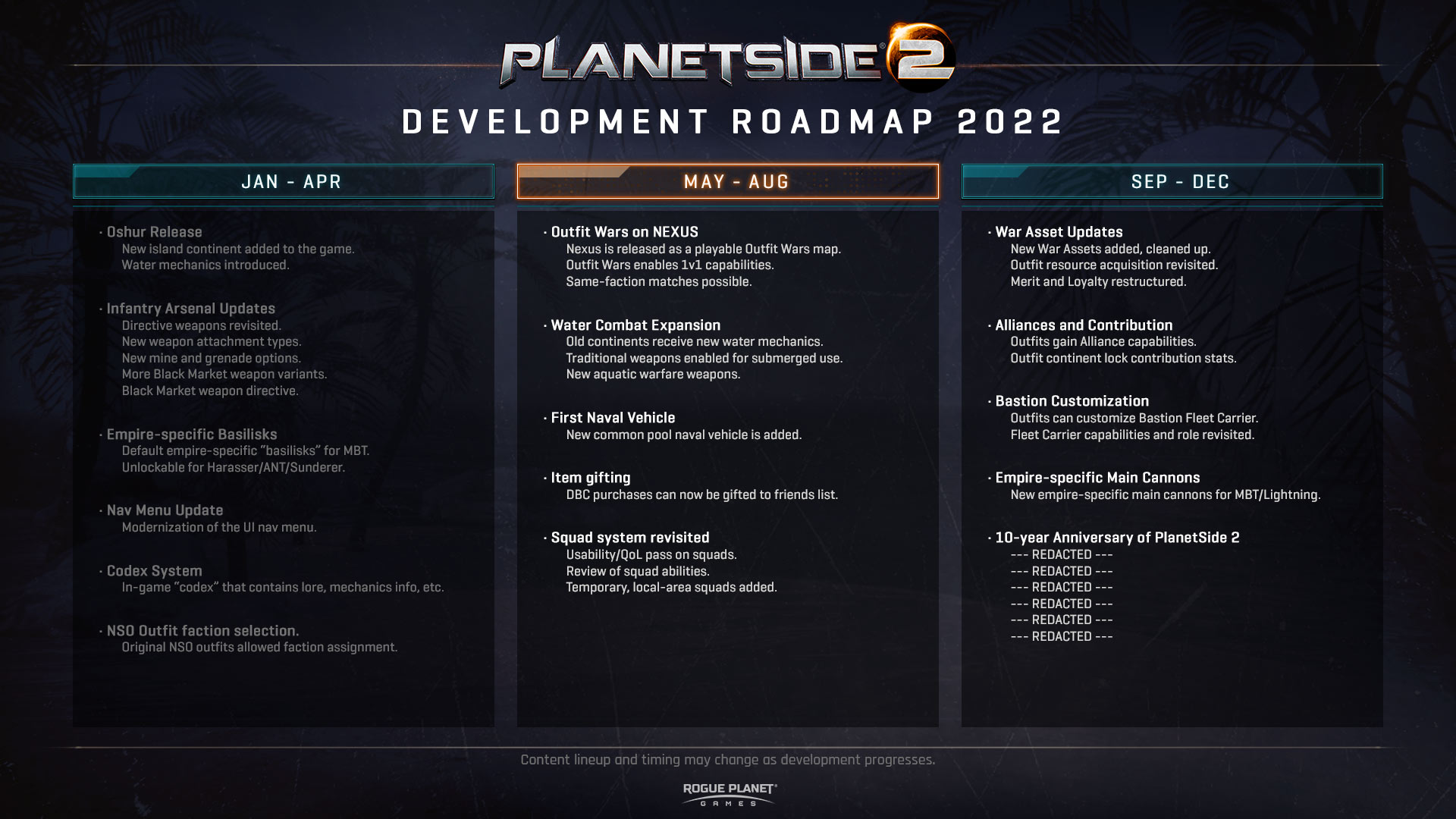 The roadmap, as we move into the second leg of our 2022 ambitions.

For our first leg of the roadmap, we delivered on most of what we set out to do, with the new Codex and Main Nav Menu updates making their way Live on May 4th. We've taken onboard a fair amount of feedback during that time, like surfacing the logout button separately from the collapsible menu, and cleaning up the membership promotion area, among others. The Codex has also been fleshed out a fair amount, and is now a good jumping off point for future additions. We'll be sending this latest round of updates to PTS later this week. 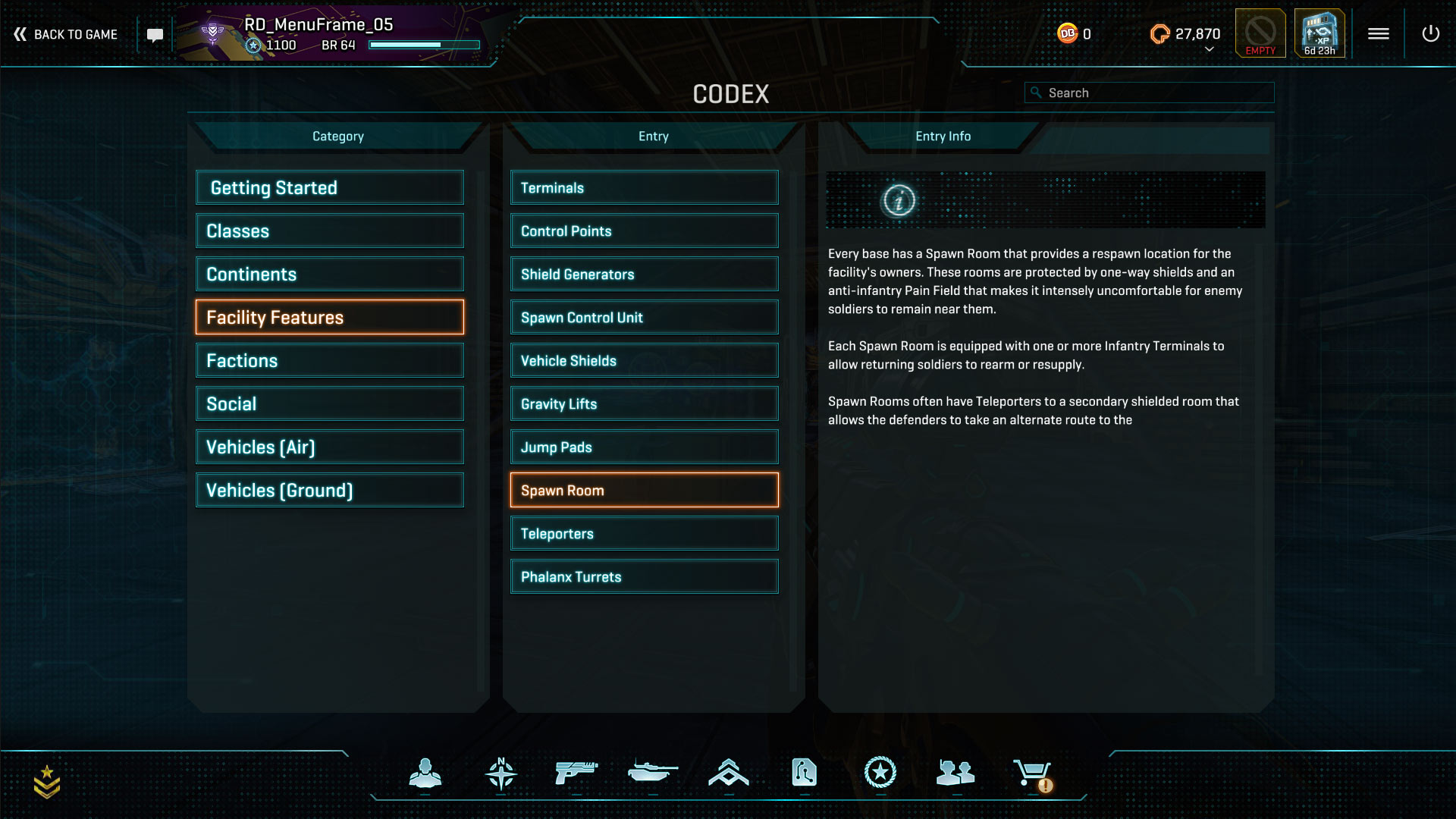 From here, we start moving into summer-ish, where we'll see the return of Outfit Wars in a new 1v1 format on the continent of Nexus. More to follow on these changes once we're closer.

While we're not wholly decided on the scope of the underwater combat yet, we'll be making efforts to expand that. The goals would be to add more depth (hah) to water gameplay by giving players reasons to use the water, ways to defend themselves, and make it a bit easier to traverse while still retaining the feel. We'll be introducing our first proper naval vessel as a part of that, which we'll talk about more in the near future.

As was mentioned in the original roadmap dev post, we'd like to introduce "Garrison Squads" that allow players to form temporary, local area groups automatically when attacking or defending regions, and take a pass on the squad finder and surrounding squad functionality as a whole.

Being able to gift DBC-purchasable items to your friends is something that's been requested over the years, and we're currently working to get this implemented. It might not land with the 19-year PlanetSide Legacy update in May, but that's the timetable we're shooting for.

There's plenty going on that you won't find in the roadmap as well.

For example, the next update will incorporate some player feedback into the Trident Relays, giving defenders the ability to reach the top of the dome to deal with attacker vehicle spawns. We've also been consistently adding quality of life improvements to the updates thus far, with a couple more on the way. You'll soon be able to disable auto-knife wielding as an option, and disable a multitude of HUD indicators (something that's been asked for for a long time.) 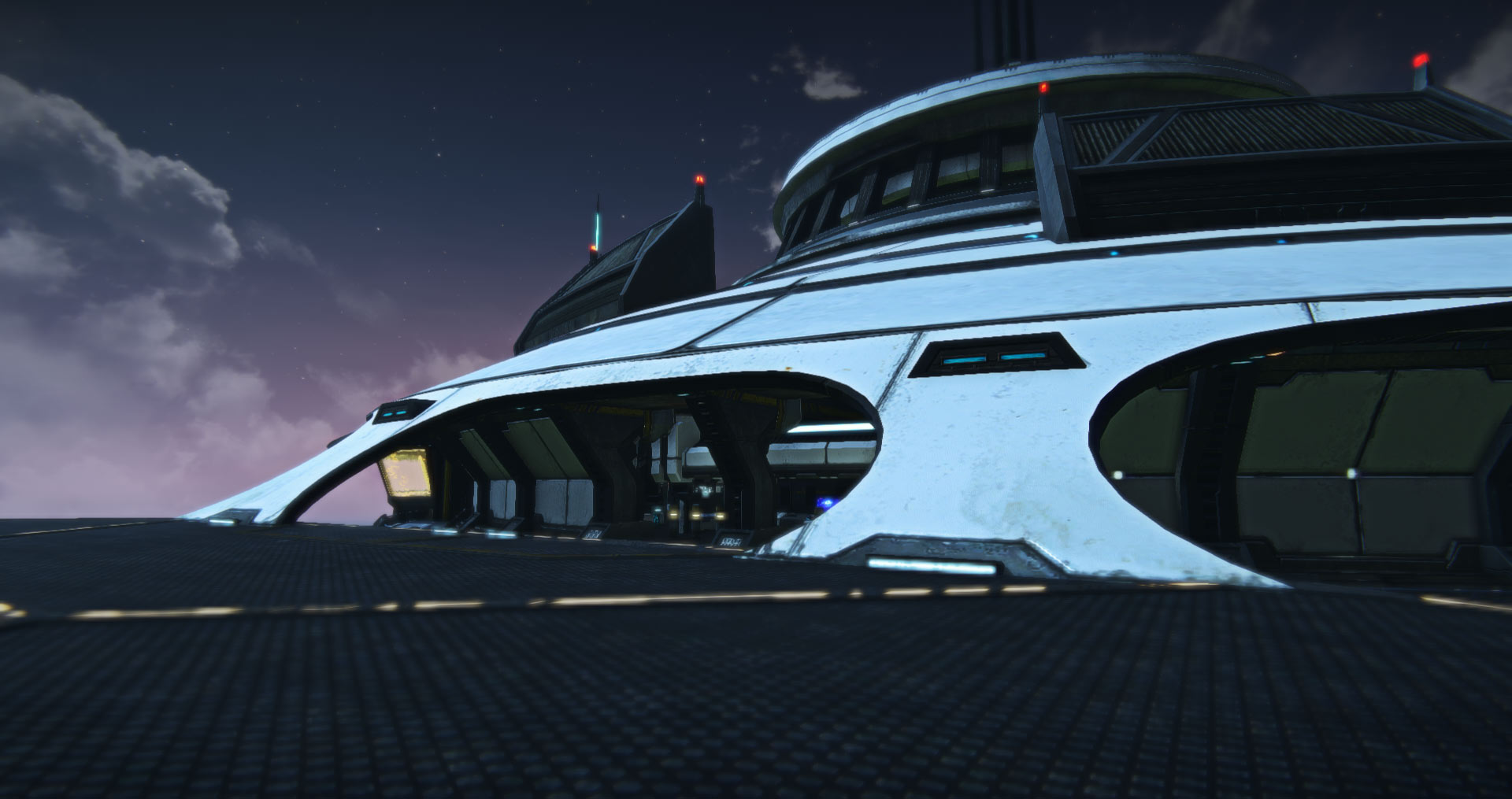 New ramps that lead to the top of the Trident Relays.

When the PlanetSide Legacy event arrives, some killer new cosmetics will make their way to the Depot, as well as all new empire-specific Anti-Material Rifles to diversify your arsenal a bit. 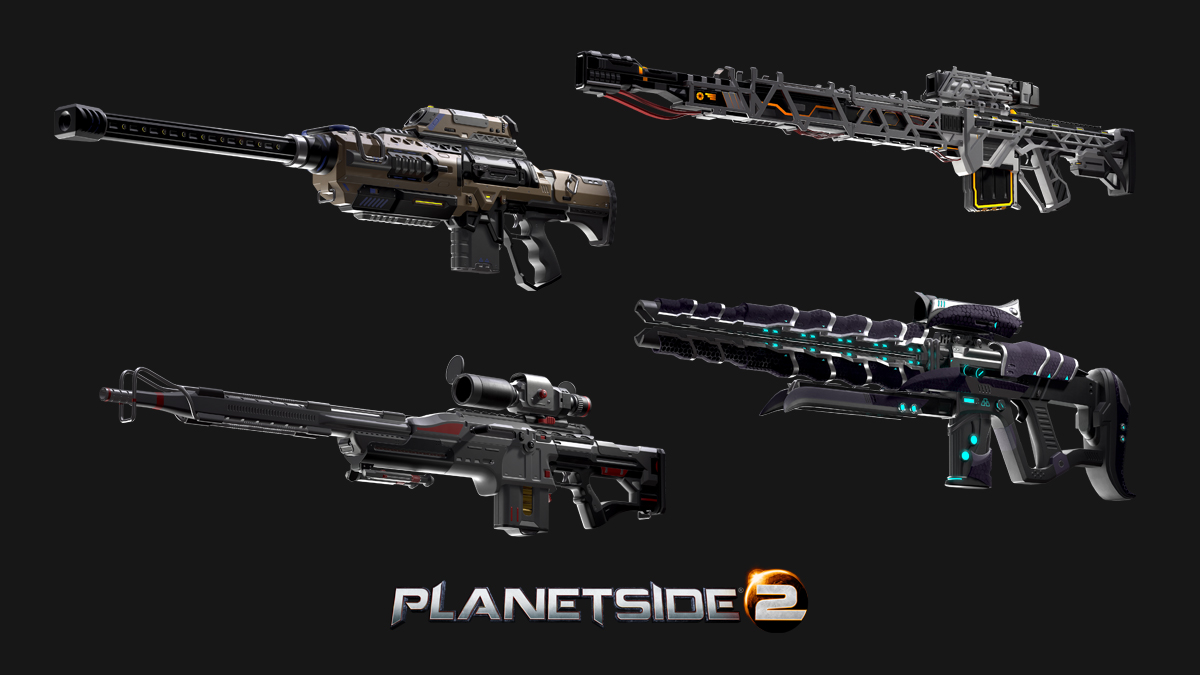 All new Anti-Material Rifles, one for each faction.

Overall, I've been happy to see the renewed excitement surrounding the Arsenal Update, and the Roadmap items we've got planned. We'll continue to build, refine, and expand as we move through the year. Thanks for the continued support, everyone.

Previous
Hook, Line, and Sinker
Next
Summer Fun in 2022!