Your Definitive Guide to the Outfit Wars Alpha 2 Finals! 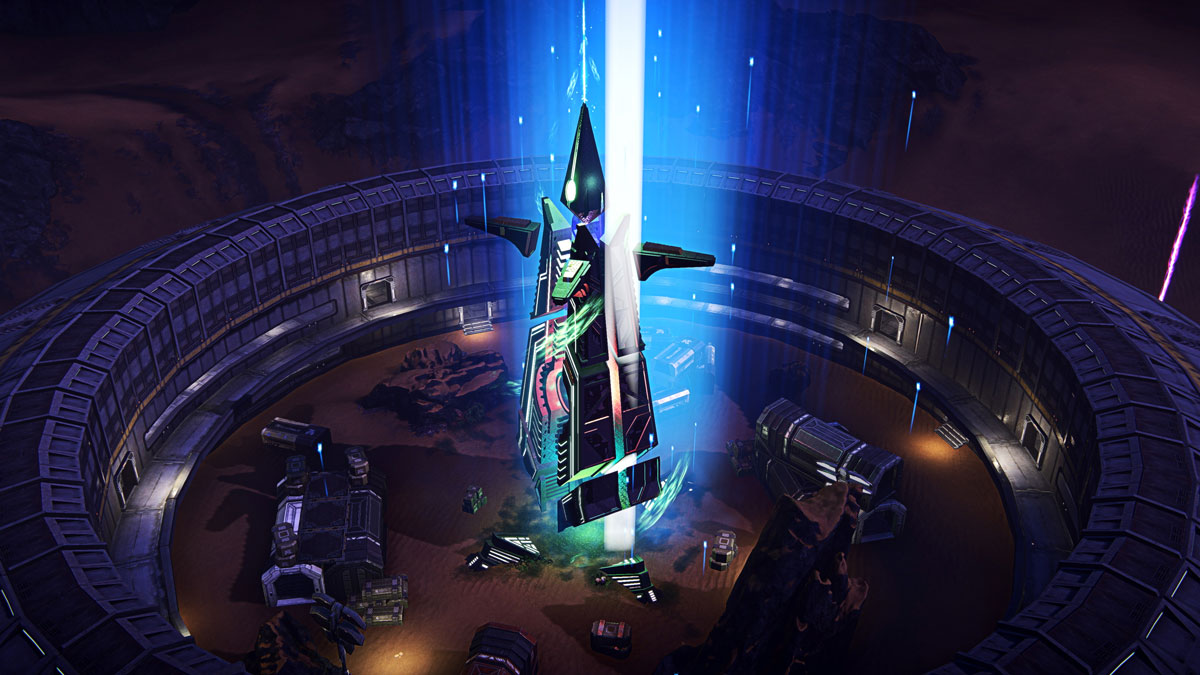 Welcome back to Desolation, soldiers! Outfit Wars make their triumphant return this Saturday, May 16, as the best Outfits across Auraxis (in all 5 server regions!) gear up for a momentous series of 144-player matches. Nothing less than offplanet supremacy hangs in the balance...

The Alpha 2 cycle of Outfit Wars saw some major changes to qualification, and we're continuing to gather community feedback as we iterate and balance for future cycles. But now it's time to turn our attention to the asteroid as the top competitors ready for battle!

Read on for all the intel on this weekend’s finals! 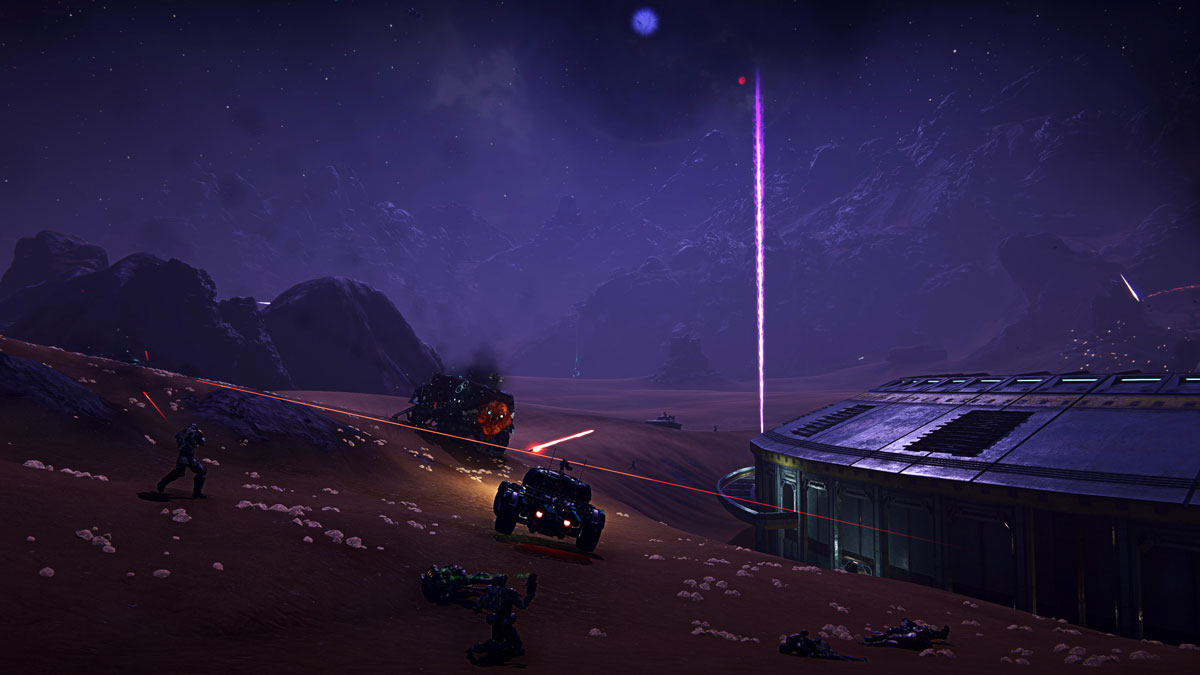 The Alpha 2 cycle of Outfit Wars saw over 170 Outfits enlist for qualification, and each one of our finalists earned their way into these finals. Congratulations, soldiers, your deeds will be forever celebrated by your Empire!

This Saturday, each server will feature 3 Outfit Wars matches (Gold, Silver, and Bronze) between the top-3 qualifying Outfits from each Empire. One change this cycle is that match start times have been spaced out 30 minutes apart, so viewers can tune in to action across the competitive tiers. We'll be hosting coverage from our talented community casters all day on twitch.tv/planetside2, starting on SolTech at 4:00 AM PDT (8:00 PM local server time).

Here’s the full Saturday schedule (all times PDT in the screenshots below): 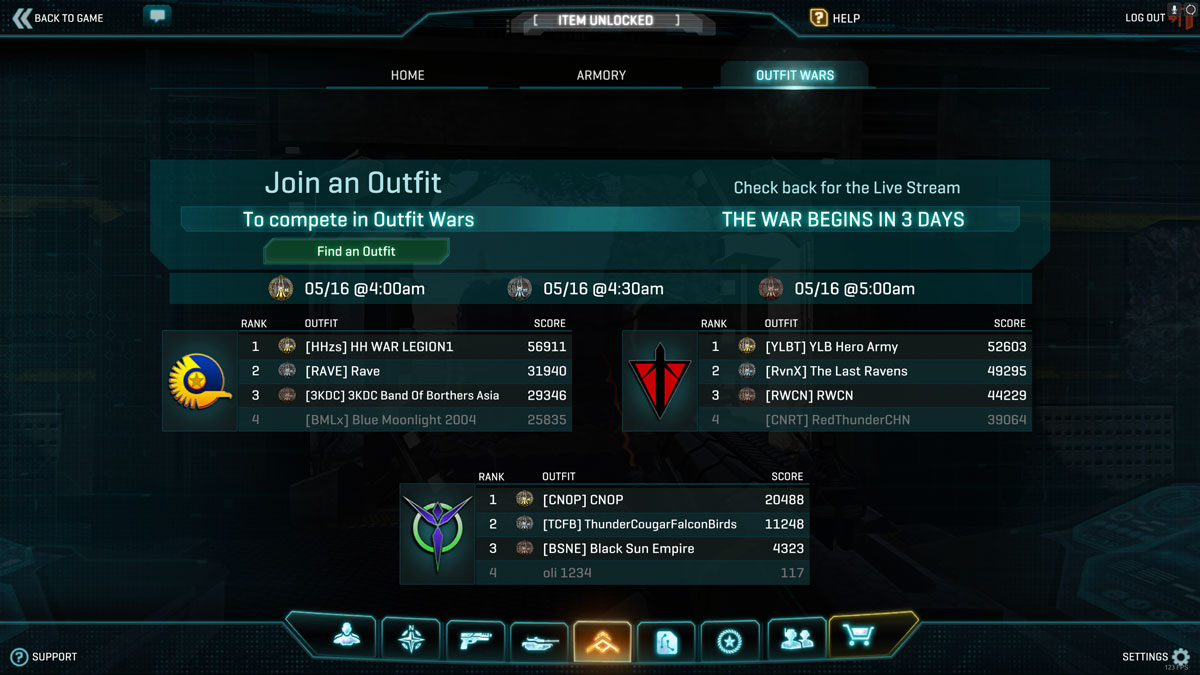 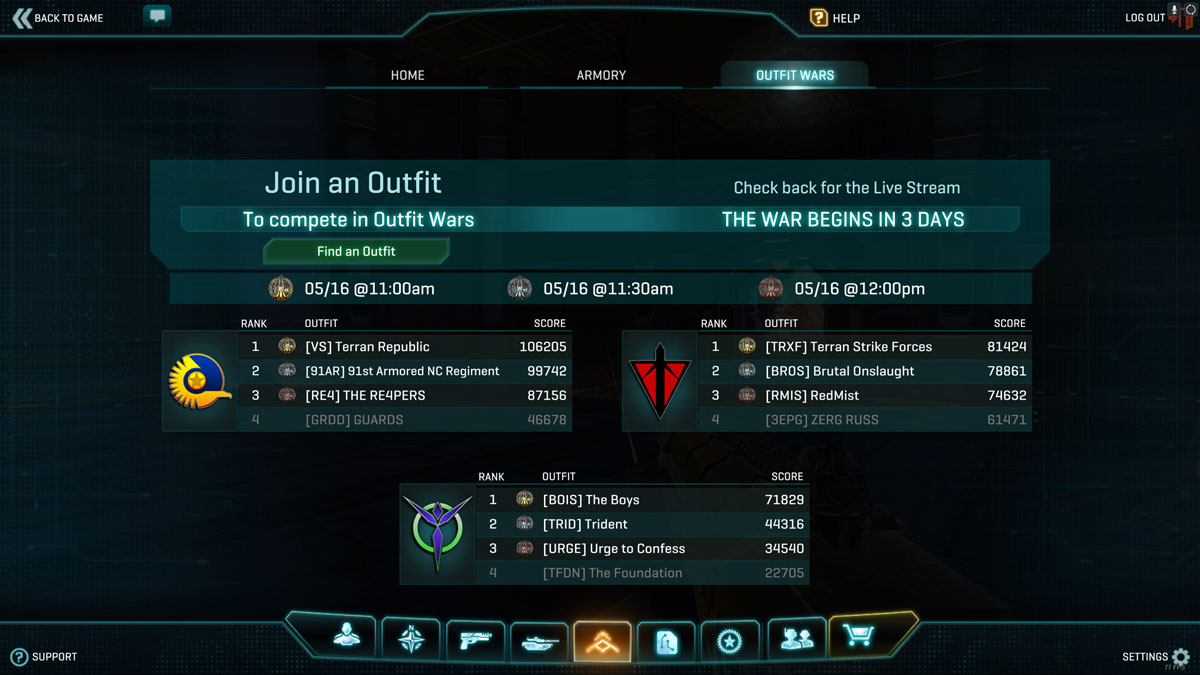 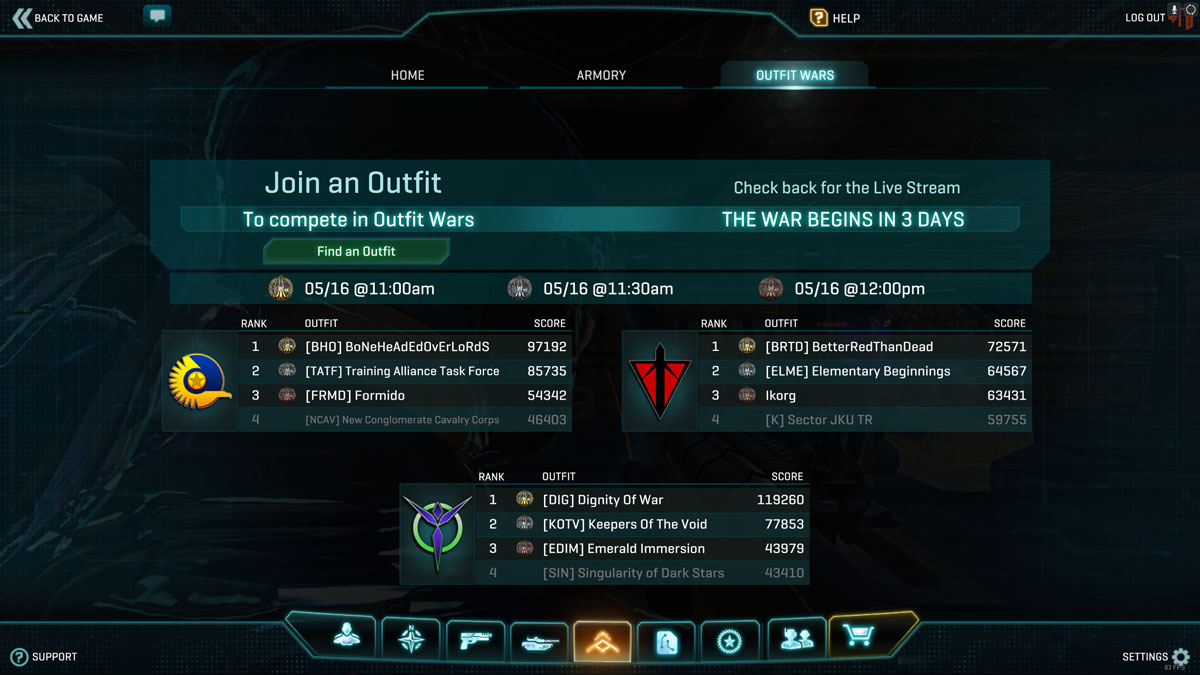 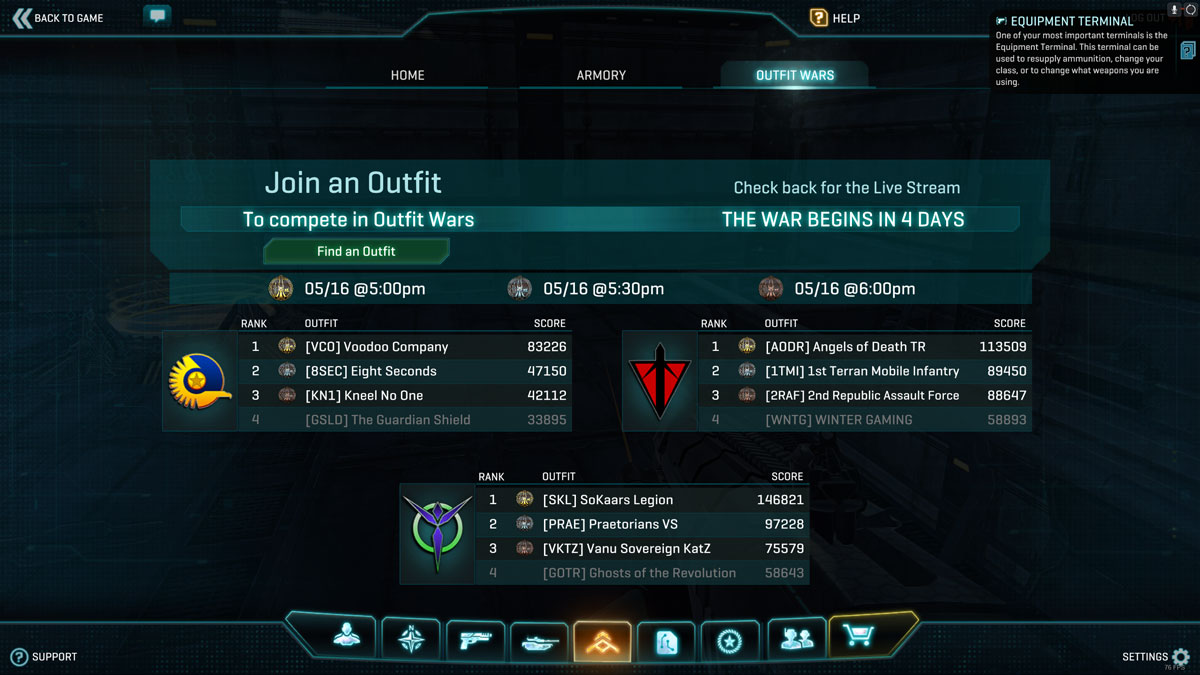 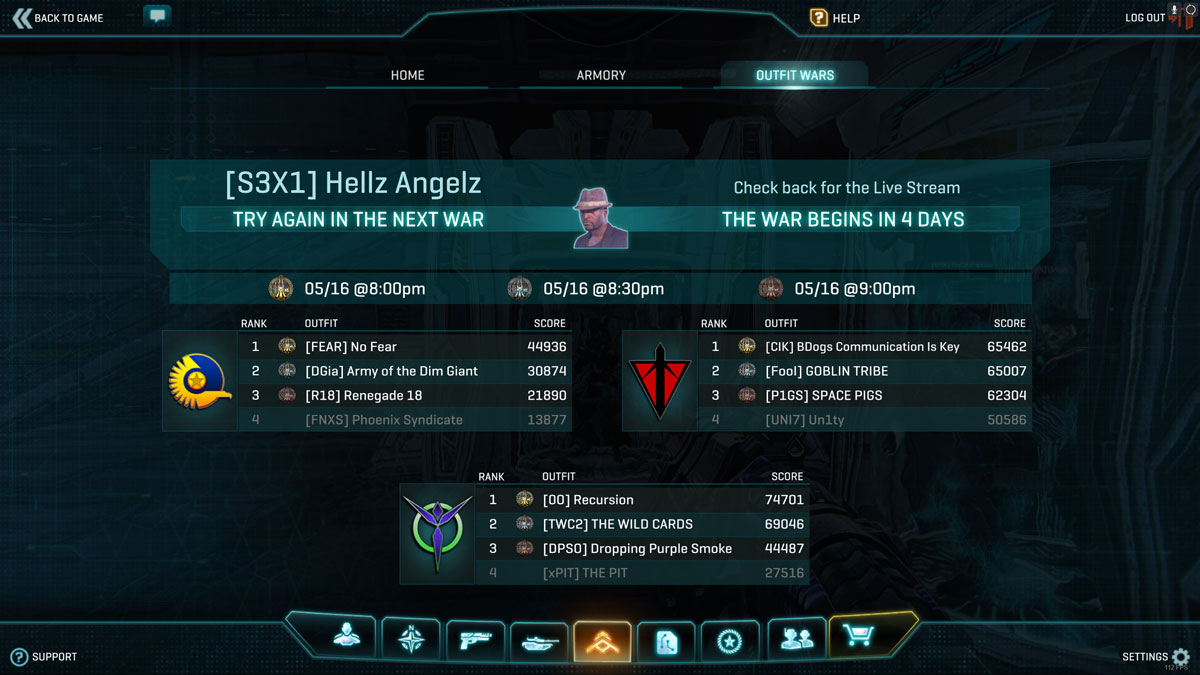 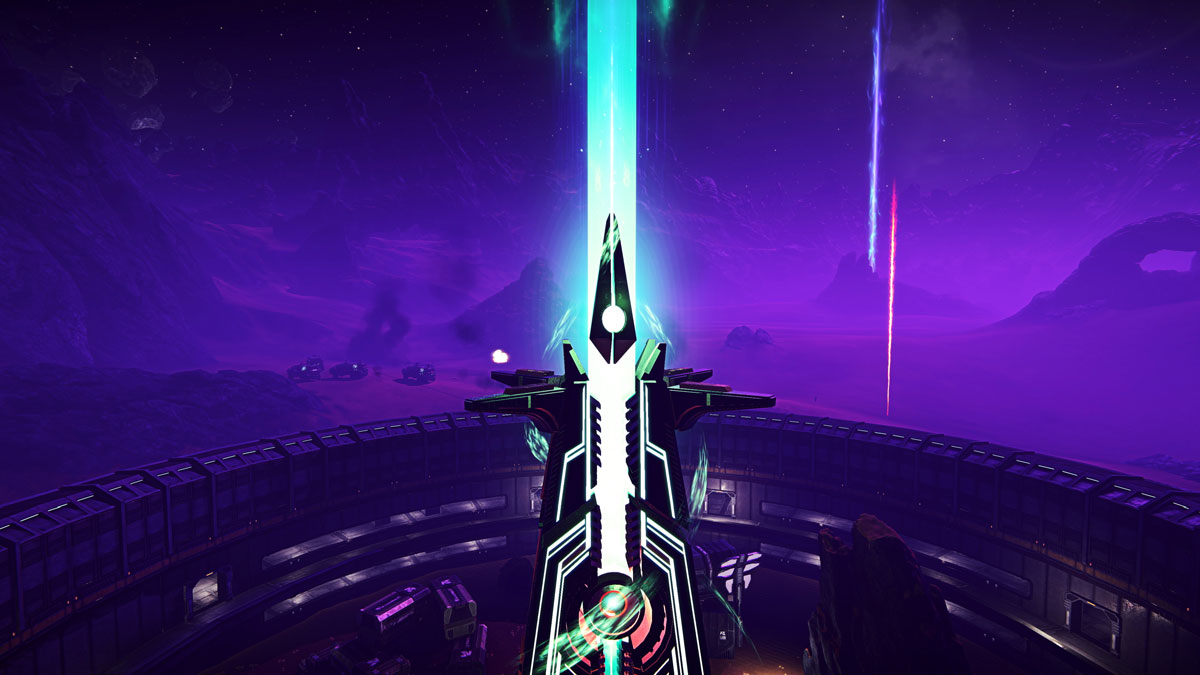 Outfit Wars matches are epic 48v48v48 player contests between all three factions on Desolation, an asteroid belt harboring ancient Vanu relics located deep in space. Each match begins with a 20-minute deployment period for Outfits to get organized beneath a protective shield near their command center. After deployment ends, a 90-minute alert kicks in to determine the fate of each match. Outfit Leaders: be sure that your platoon mates are flagged with the "Outfit War Eligible" privilege to afford them access to Desolation!

The objective for each Outfit is to capture and control critical territories on Desolation – Vanu obelisks – which accrue points for each second under that Outfit’s control. The only way to earn points is to capture and hold those obelisks, which requires exceptional coordination, skillful teamwork, and decisive tactics, with two formidable opponents vying across the same ground! The first Outfit to reach 750 points (up from 500 last cycle), or the Outfit with the highest score at the end of the alert, will have won the match on behalf of their Empire.

Participating Outfits will have their armory of War Assets available (with the exception of the Bastion Fleet Carrier), and can continue to craft Assets during the match. Each Desolation Command Center is fitted with a Cortium Silo housing 75,000 Cortium, along with pre-installed vehicle and air pads capable of spawning all standard vehicles. The Construction System can be used across all of Desolation, and Cortium nodes can be found scattered throughout. However, resources are scarce (you do not use nanites to pull vehicles, and Cortium is limited) so spend wisely!

When the Alert ends, all victorious players in the zone will be granted the "Warrior" special title to commemorate their achievement! Winning Outfits will also receive a completed Bastion Fleet Carrier as a reward for their valor.

Our community streamers did an absolutely INCREDIBLE job casting OW finals during our inaugural weekend, and we're thrilled to have another strong lineup of casters bringing you coverage. We’ll be hosting their broadcasts all Saturday at twitch.tv/planetside2, or you can check them out at any of their channels below:

*We will add new channels covering OW as they're confirmed (including additional non-english language options).

Streamers and content creators competing also have permission to broadcast live gameplay, though be wary that you might be giving away tactical secrets if you're not on delay!

Eager to see who earns the most glory on behalf of their Empire, soldier? Check out our coverage at twitch.tv/planetside2, or follow us on Twitter or Facebook!