Urban legends are almost universal: everyone’s heard stories about haunted mirrors, escaped serial killers, and creepy clown statues.  Even on Auraxis, soldiers speak of unexplained happenings and eerie sightings out in the field.  So equip your flashlight and pull up a chair, because the following stories are all 100% true:* 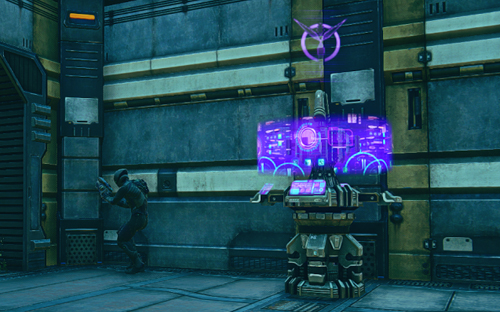 A Vanu squad had just captured an empty outpost on Amerish, and they left an Infiltrator behind to make sure there were no stragglers.  He’d just settled in behind some supply crates when his radio crackled to life.  “Have you checked on the point?”

Assuming it was Command, the Infiltrator hit the comms button to respond. “Affirmative.”

There was no response, and the Infiltrator relaxed.  Until it happened again:  “Have you checked on the point?”

“I said all clear,” he answered.  Maybe they hadn’t heard him the first time. The only sound was the wind whispering through the trees.  He grew restless, ready to rejoin his squad.

The buzz of his radio made him jump.  “Have you checked on the point?”

“For the third time, yes!” he growled.  “Geez, don’t you guys pay attention?”

But to his shock, the radio beeped again.  “Soldier, this is Command.  You’ve got to get out of there on the double.  That wasn’t Squad comms… it was Proximity comms!  It’s coming from inside the base!” 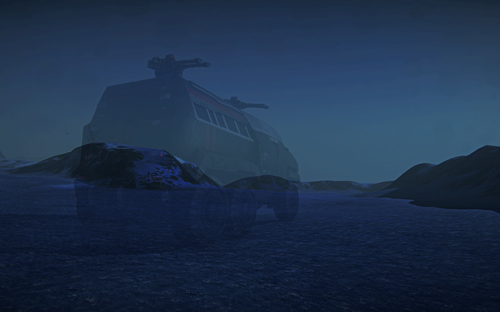 A Terran Republic pilot found herself stranded after enemy forces shot down her Mosquito over Esamir.  Although she managed to survive the crash, her radio was destroyed, leaving her unable to call for help.  With no other choice, she set off on foot toward the nearest base, trudging through the heavy snow.

It was growing dark, and the pilot knew she had to get to shelter soon: nights on Esamir were dangerously cold.  So when she heard the sound of an engine approaching, the pilot ran for the road, waving frantically.

An older model Sunderer swung into view, its headlights slicing through the swirling snow.  When the vehicle ground to a stop, she climbed inside, instinctively taking one of the gunner turrets.  “Boy, am I glad to see you, soldier!  You saved me!”

She couldn’t really see the driver from her vantage, but she could hear him.  “I’ll take you back to base,” he said gruffly, ignoring her gratitude.  Well, as long as she got to safety, who needed small talk?  When the pilot caught sight of the lights of the outpost, she jumped out of the Sunderer, racing toward her waiting squad.

“We were just about to send a search and rescue team, soldier!” one of the guards called. “How did you make it back?”

The pilot smiled, pointing over her shoulder.  “I lucked out when this guy found me!”

The second guard squinted past her.  “What guy?”

“Are you blind? The guy in the sunder—” the pilot began, but as she turned, the words died on her lips.

There was nothing behind her but the softly falling snow, already covering up a set of fresh tire tracks. 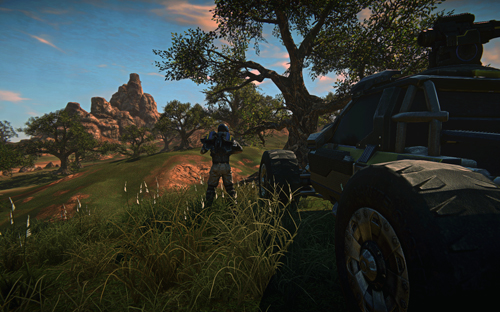 Two New Conglomerate soldiers were sent to scout a base as the potential target for their squad’s next attack.  They parked their Harasser a safe distance out and were discussing tactics when the radio crackled to life:  “Return to base at once, soldiers.  We have reports of enemies in the area.”

The younger soldier obediently started up the Harasser, but the older stopped him.  “What are you, chicken?  There’s nothing on the radar.  Now shut it, so I can finish marking these points.”

Assuming the older man knew what he was talking about, the younger soldier cut the engine.  But he couldn’t shake the feeling of being watched.  The double moons of Auraxis cast eerie shadows and turned the rock formations all around them into strange creatures.

A noise from somewhere behind him made the soldier jump.  “What was that?”

The older soldier sighed.  “You are such a coward.  Hold on, I’ll go check it out.”  He kicked open the door to the Harasser and strode off, his boots crunching over the rocky ground.  “Oi! Any bad guys out here?” he called, his tone mocking.  “See, soldier?  What did I—”

His words were cut off by a bloodcurdling scream.

Blind with panic, the younger soldier acted on instinct: he slammed on the accelerator, not stopping until he got back to base.

His squad leader met him in the vehicle bay, already yelling about leaving a man behind.  But when the soldier opened the door, the officer fell silent.

Stuck to the door handle was a scrap of purple spandex.

Want to keep the Halloween spirit rolling? Trick out your vehicle with spooky-themed camo, hood ornaments, horns, and decals, available for a limited time in the Depot. And for all the latest intel from PlanetSide2, follow us on Facebook and Twitter. Enlist today and play for free at www.planetside2.com!

(*I swear, it happened to my friend’s mom’s brother’s friend’s aunt!)