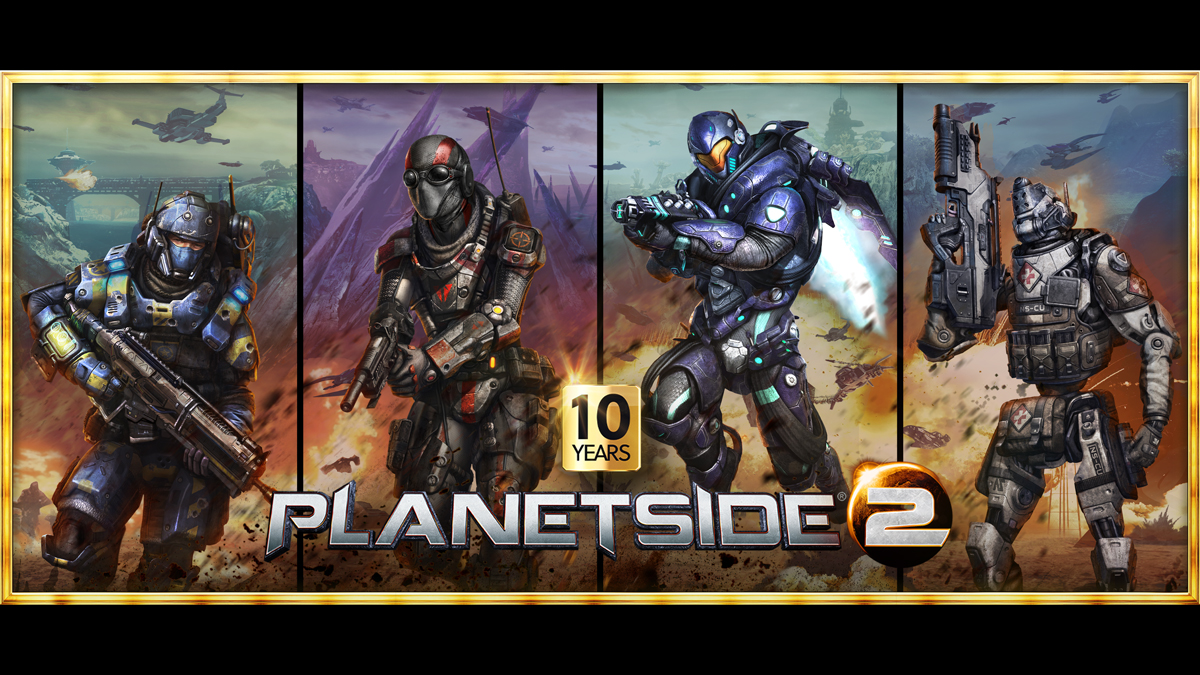 On November 20, PlanetSide 2 will be celebrating ONE DECADE of war on Auraxis. In this anniversary update, you'll find loads of visual updates, balance changes, an entirely new facility capture mechanic, new items available in the Depot, and even some upcoming events. All the details found below.

Join us at 2pm PT (11pm CET), Nov. 20 on www.twitch.tv/PlanetSide2 for a head to head to head matchup with community creators, Camikaze78, CMDRCyrious, and Wintergaming, hosted by ArsheeTV! Our guests will pit the might of their faction against one another on Jaegar for this special event.
More information here: https://www.planetside2.com/news/ultimate-empire-showdown-2022

Want some DOUBLE EXPERIENCE? Check out the schedule below!

Celebrate the 10th Anniversary with a new decal, only 10 Certs in the Depot for a limited time! 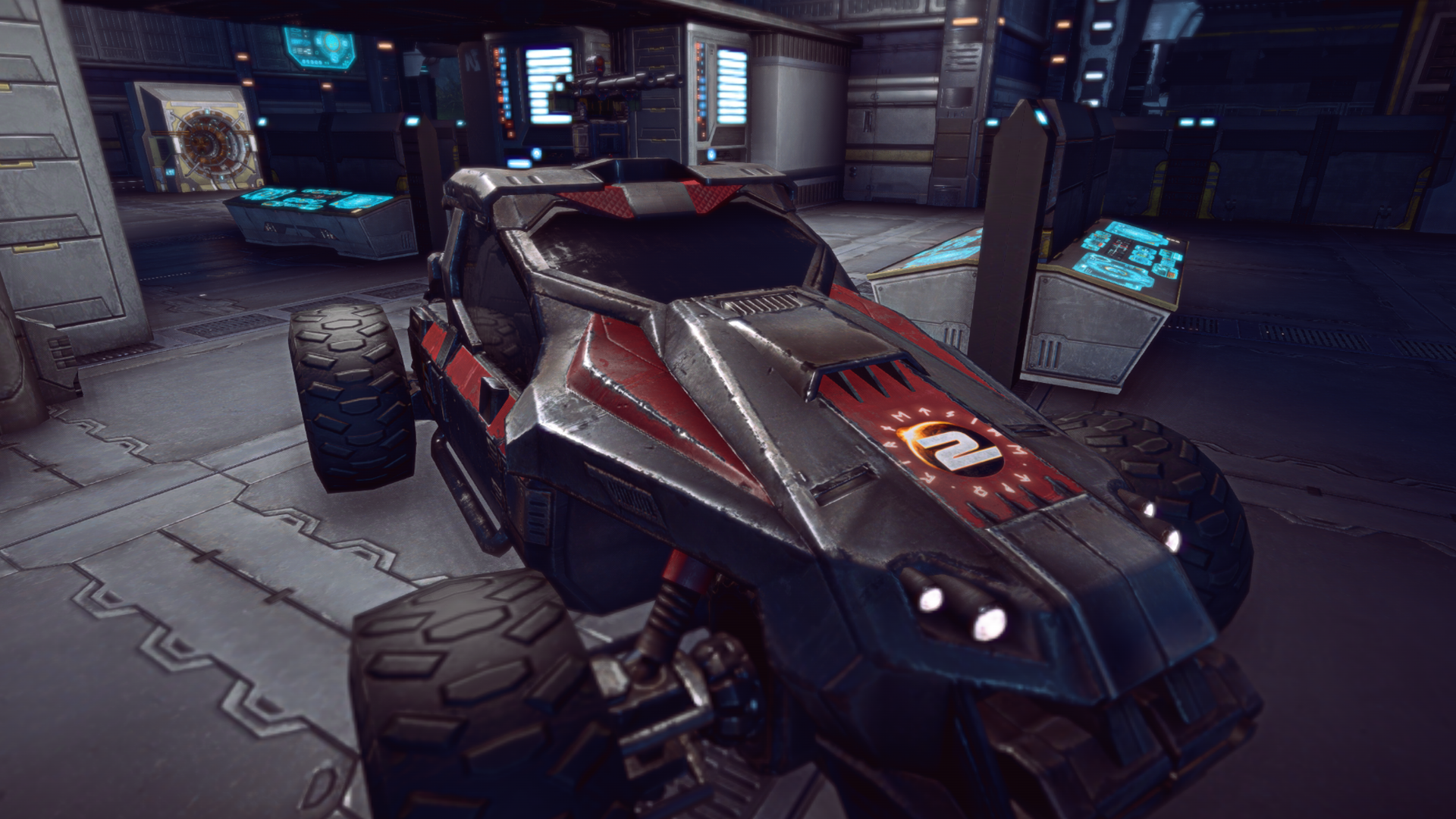 With the 10-year anniversary, we've added a whole new way to wage war. You'll see various bases throughout Auraxis outfitted with a new CTF-style mechanic we call Capture the Conduit.

A more detailed breakdown is found below.
Each Conduit Outpost has at least one Podium and one Repository (or "Repo",) but some bases have more.

Podiums hold Conduits that attackers must steal from the defenders. Conduits can only be off a podium for a limited amount of time, and any captured Conduits respawn after a short delay.

Each outpost has a certain number of captures, referred to as "strikes," against a base before it's conquered by attackers. The faction that captures the last Conduit will conquer the base. 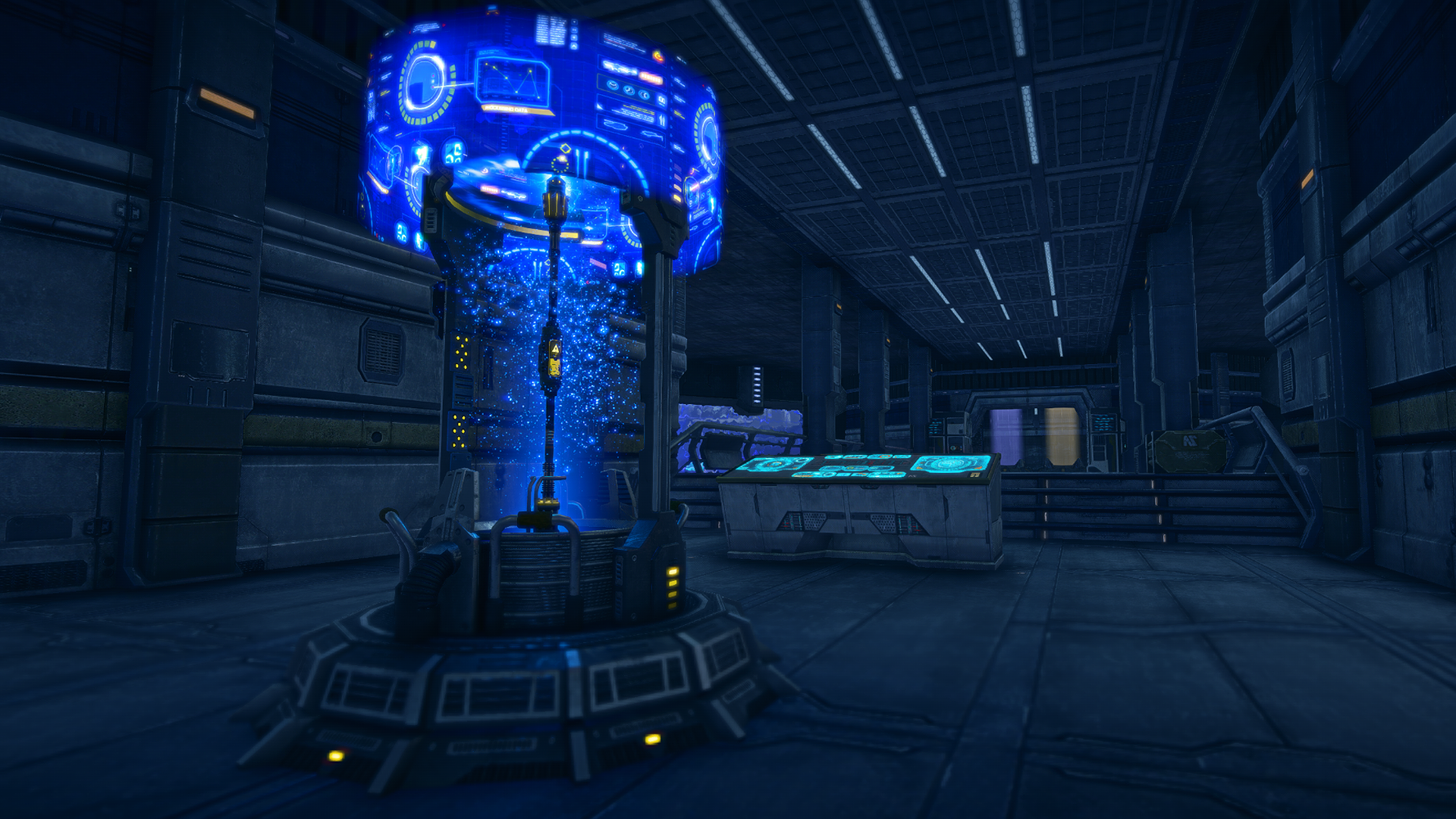 Conduits
Grabbing a Conduit will give you a short burst of speed and restore your shields, but you can't fire weapons, and some abilities have reduced effectiveness while a Conduit is held.

Dropping a Conduit puts your suit's hazard protection on cooldown, preventing you from picking it back up for a time, but an ally (or enemy) can pick it up immediately.

If a defending player interacts with a dropped Conduit, it is immediately re-secured, and the Podium it came from will generate a new Conduit in its place. 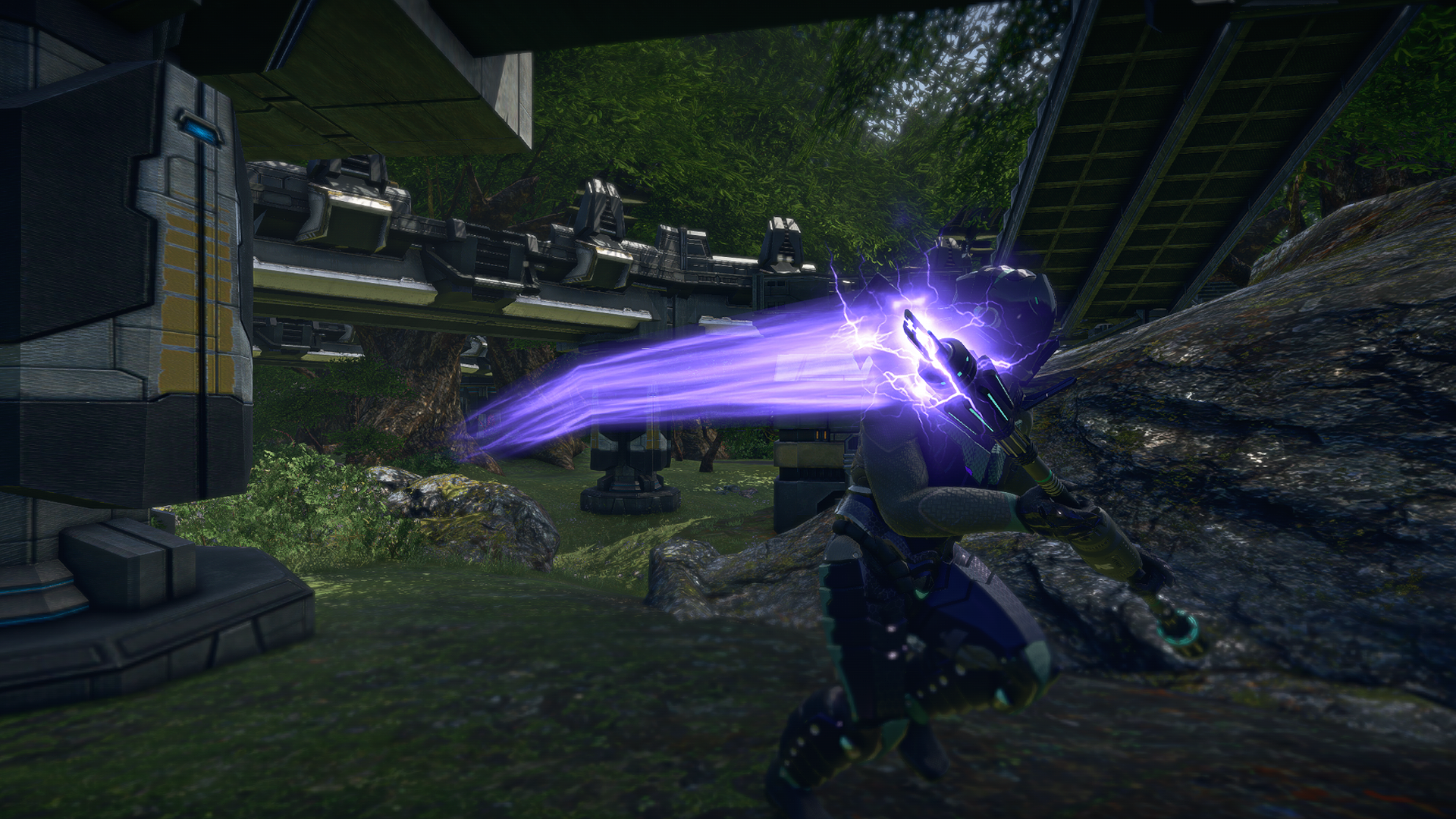 To attack a base, you'll need to hack one of these Repos to establish your presence.

A Repo is where attackers can cash in the Conduits they've stolen.

Capturing a Conduit by depositing it into a Repo will earn a strike toward the base.

If defenders are able to re-secure all Repos at a base, the base itself will be immediately re-secured, and the assault will need to begin anew. 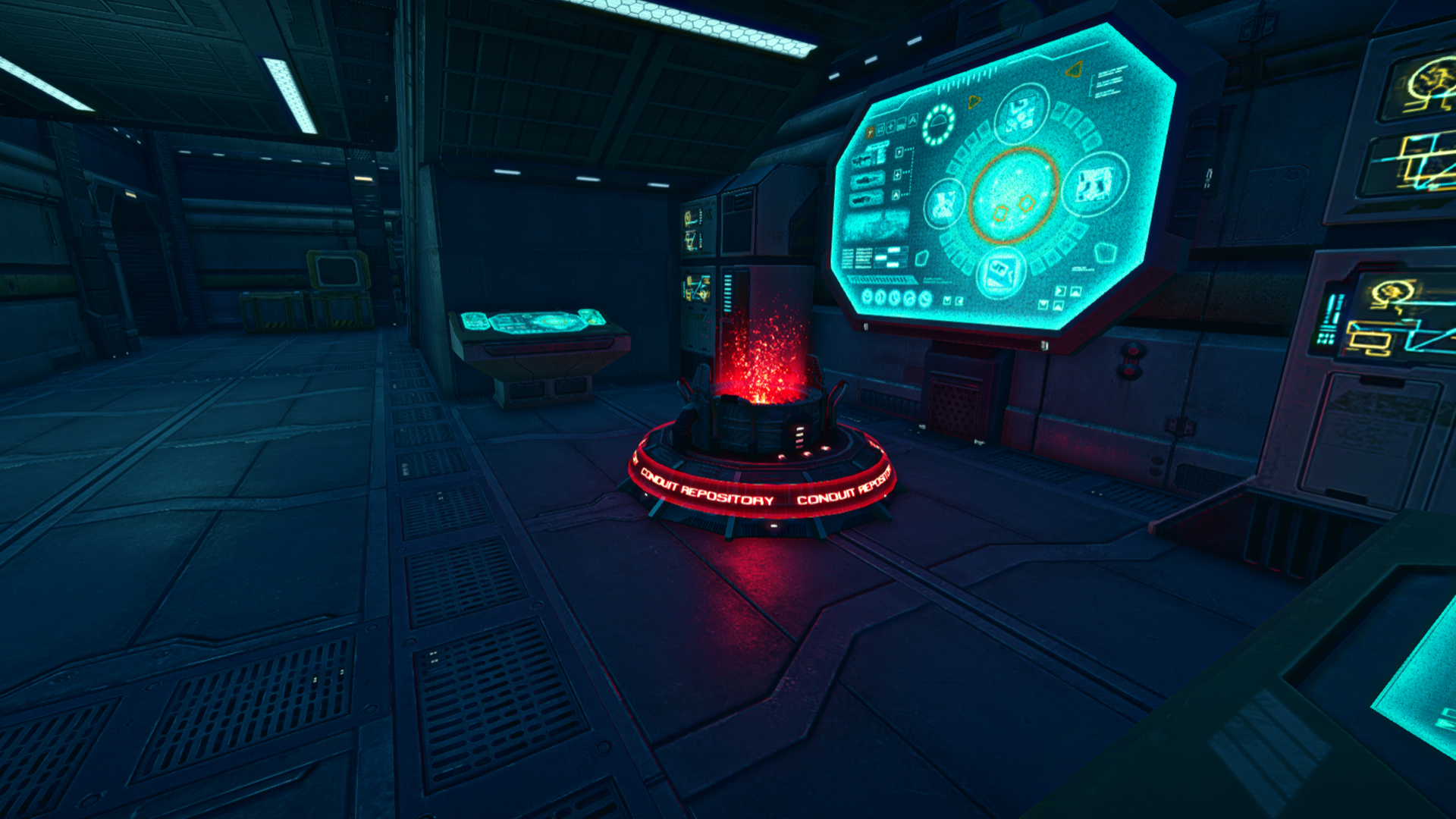 Dev Note: Currently, Repos only take a few seconds to hack, but this will be converted to an overload-style mechanic in the near future.

Below is the list of bases converted to Conduit Outposts.
Amerish

The Bastion Fleet Carrier has received a role adjustment that places its power in the realm of map control. This massive vehicle can now hasten attacks on enemy bases, stall attacks on allied bases, and become a spawn point for more than just your Outfit.

New Commands
Three new commands have been added to the Bastion's repertoire - Lockdown, Assault, and Anchor.

Each of these commands last until the Fleet Carrier issues a new command or is destroyed.

Dev Note: The above adjustments make these weapons a bit less of a headache to use. 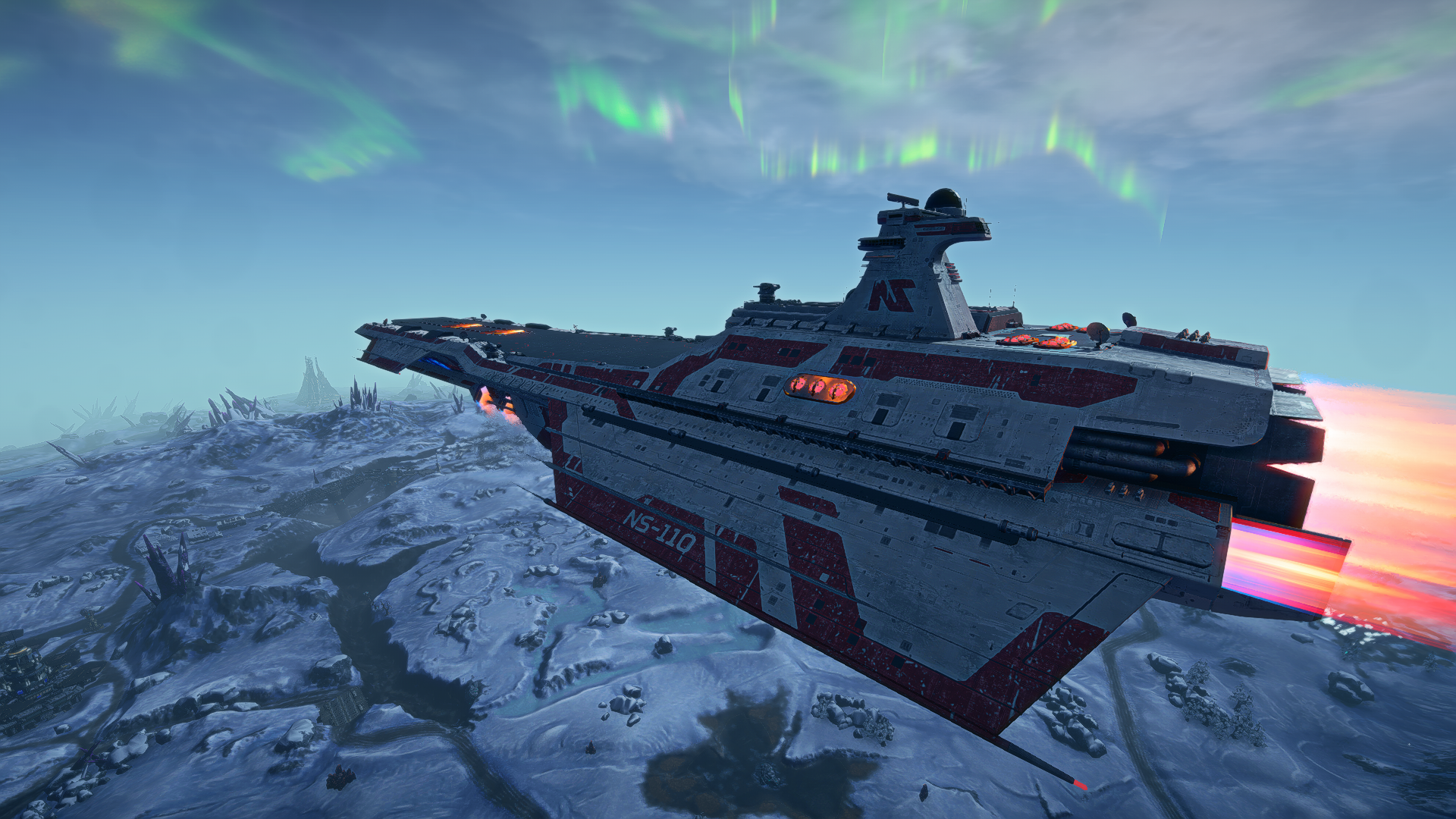 Picture of a Bastion Fleet Carrier against Esamir's updated sky.

We've developed a number of new graphical enhancements and updates in anticipation for the Anniversary release.

Texture Updates
We've polished many of the texture sheets in our game by bringing them more in line with current physically based rendering (PBR) standards. Overall, the changes pull back some of the excessive grunge on structures and vehicles, bumps up the reflectivity, and makes the faction colors on painted metal feel a bit more vibrant. 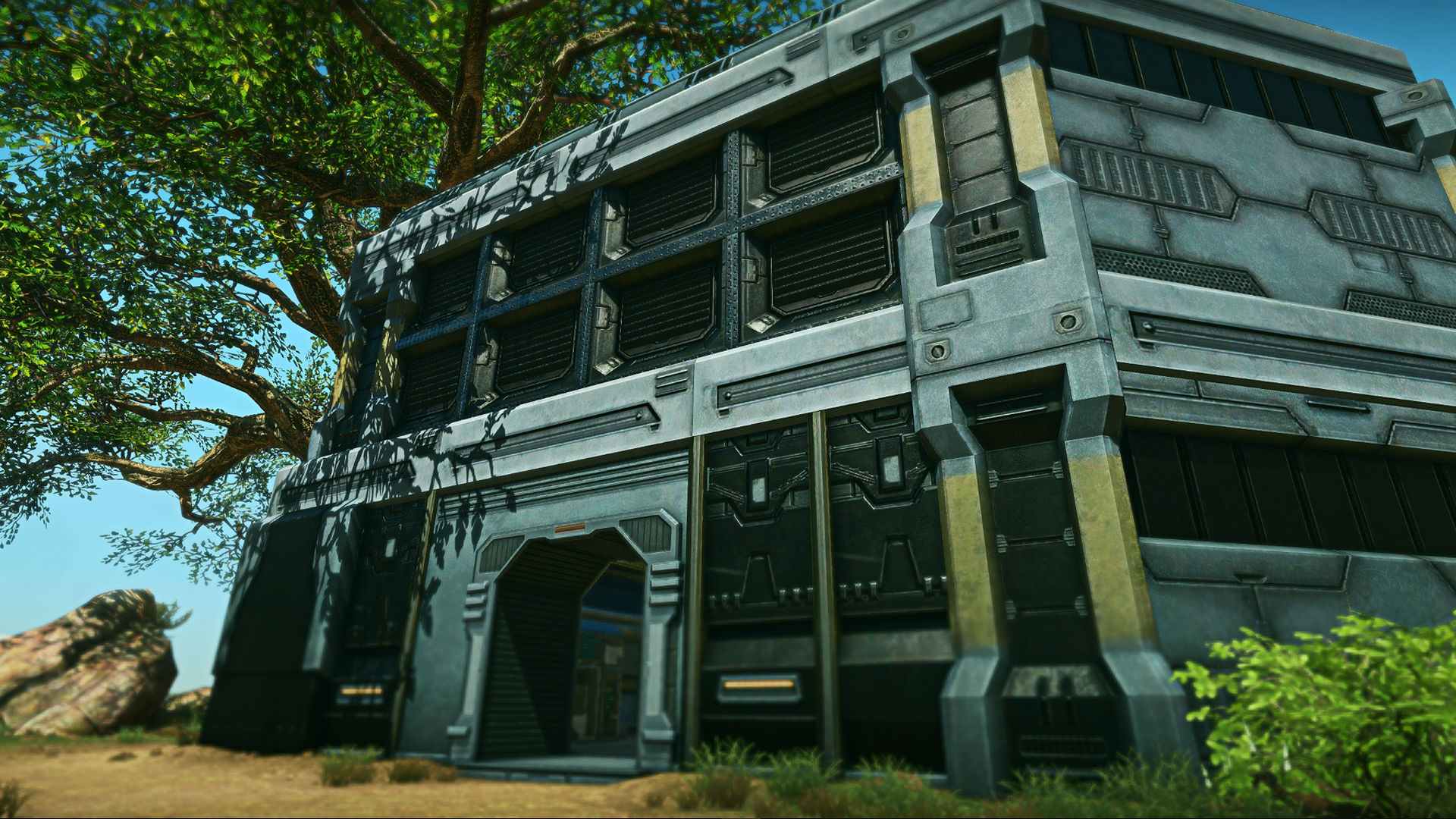 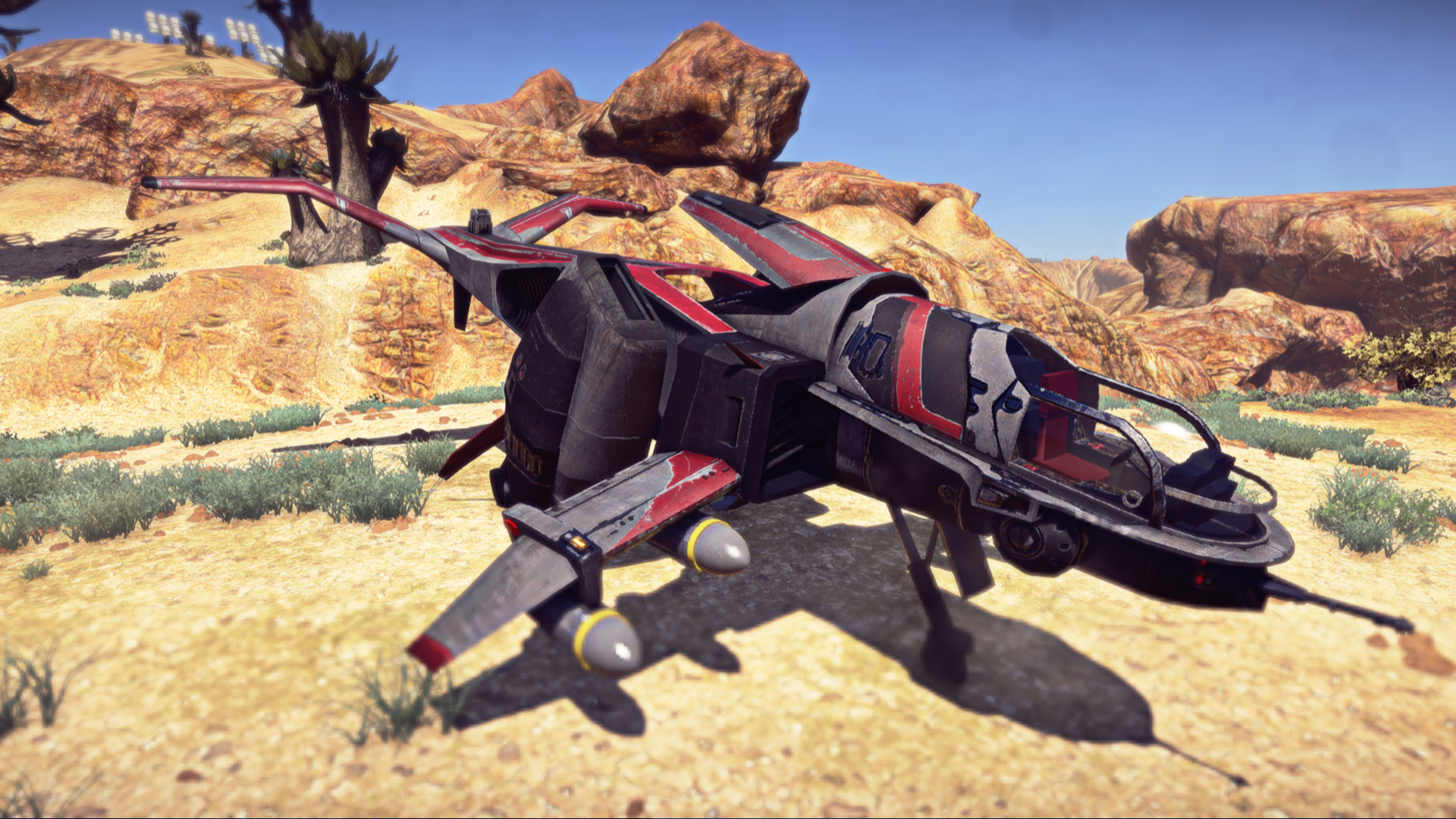 Water Reflections
Oshur's ocean now looks more... ocean-y, with the addition to water-based reflections. You can adjust the quality settings of these water reflections in the Graphics menu. 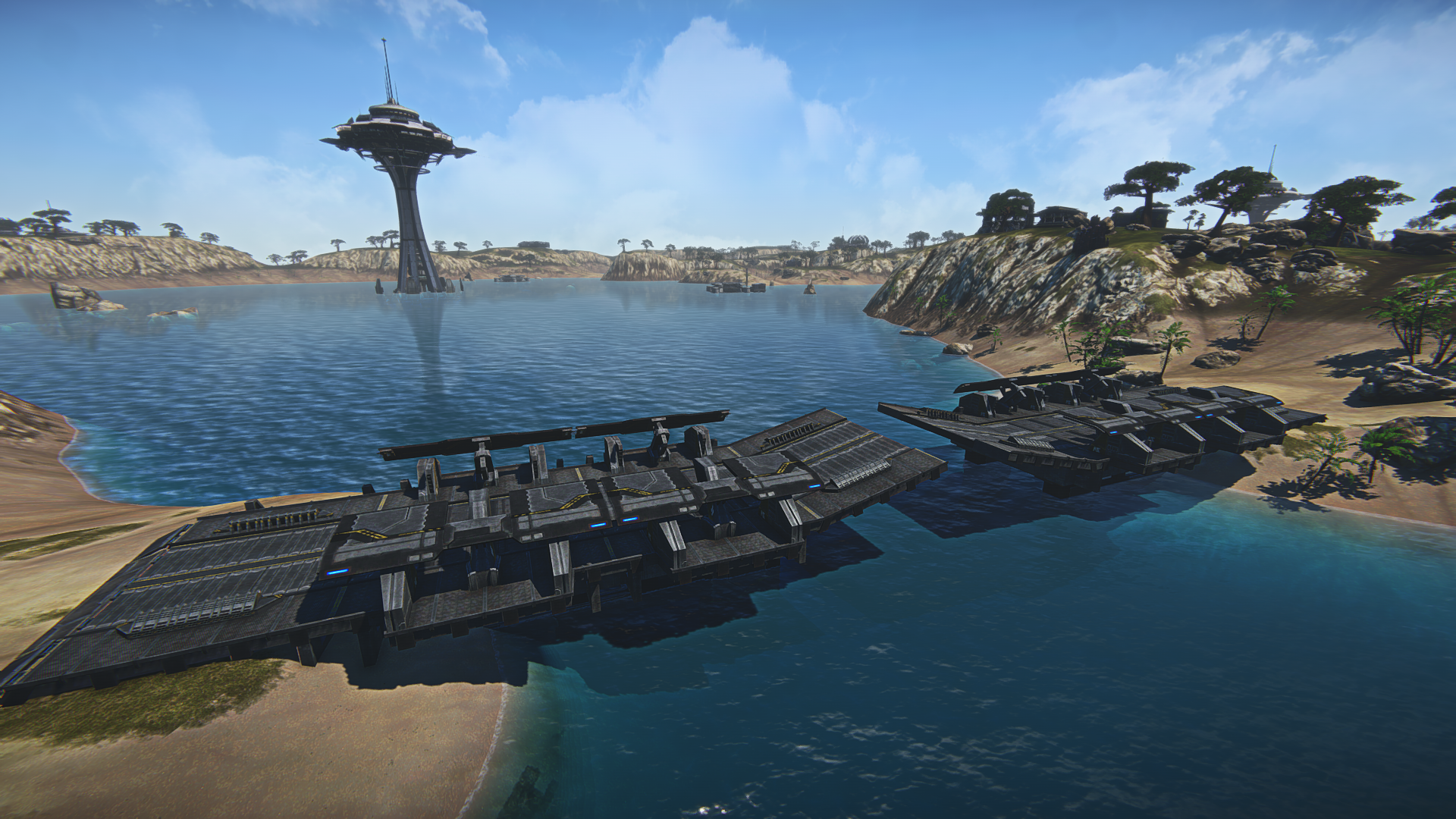 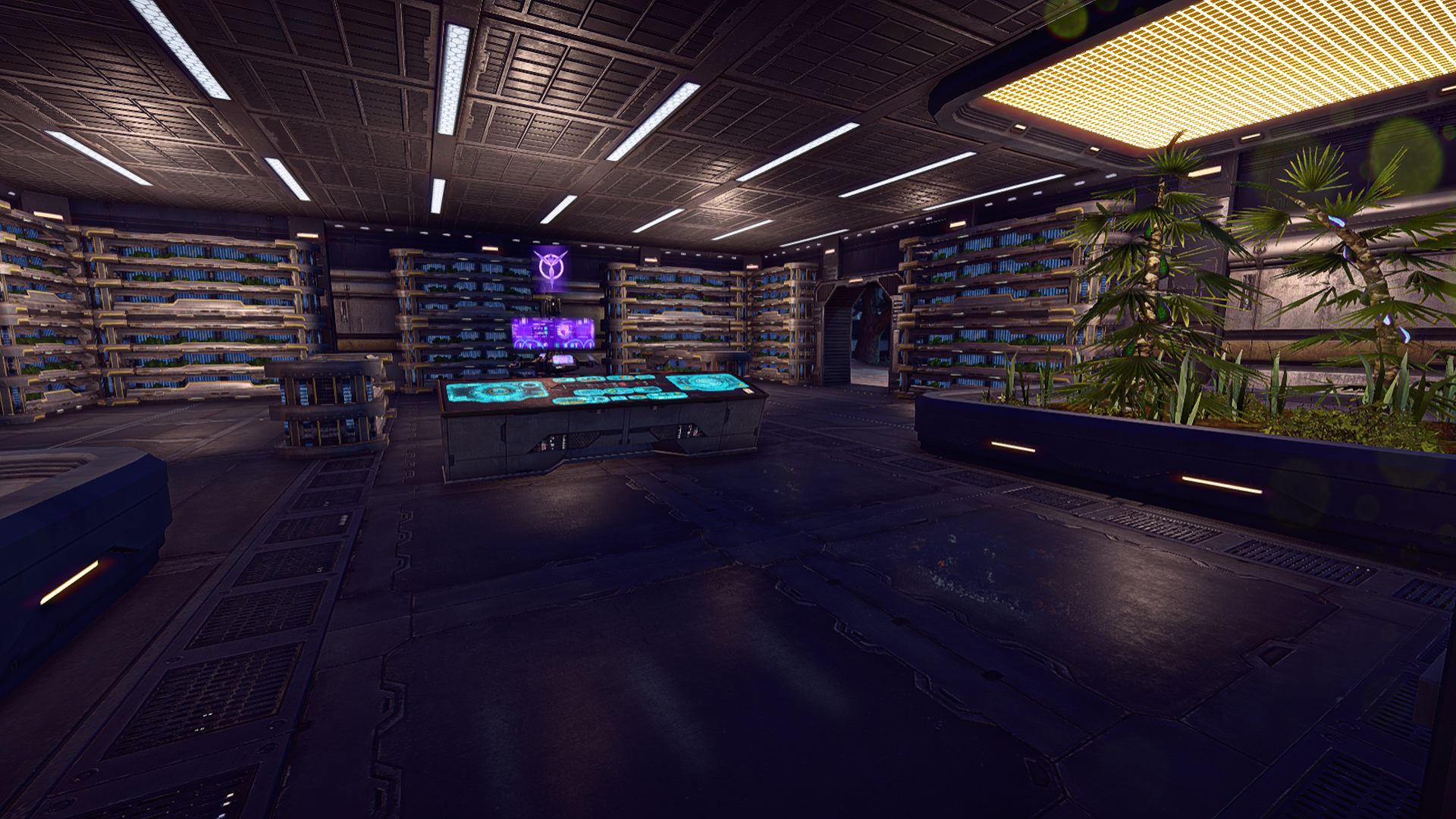 Sky Improvements
We've made updates to the skies across Auraxis, generally adding more color to the environment and cleaning up issues like blocky clouds. 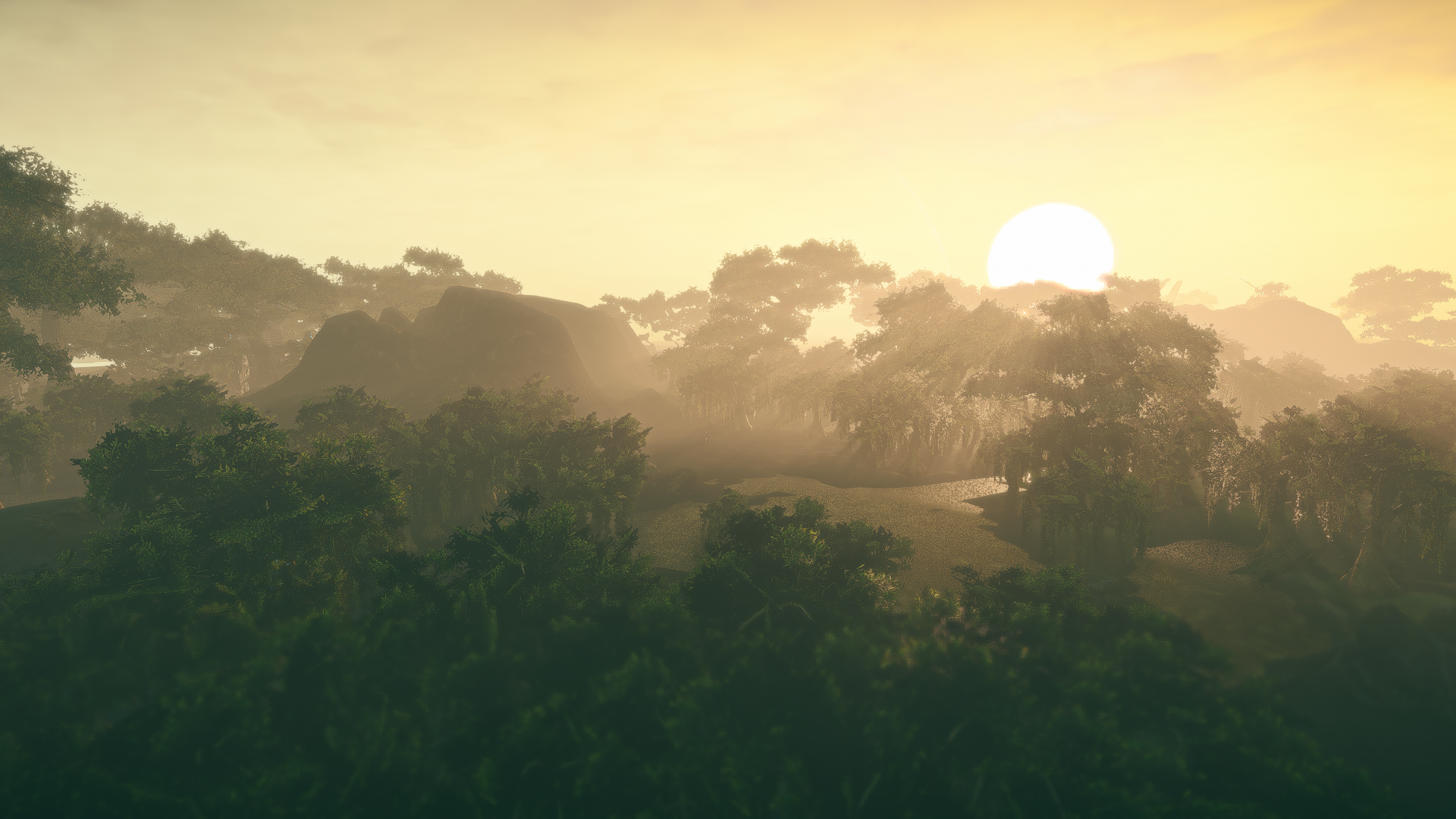 New Explosions
Many of the on-impact explosions have received visual revamps, as well as performance optimizations.

Anti-Aliasing Options
You now have new anti-aliasing options to choose from, allowing you to smooth out those jagged edges. We've added options for FXAA, TAA, and FXAA+TAA.
Dev Note: The TAA options need a bit more refinement, which will land in a later update.

New to the Depot this Anniversary! (Available through November)

In the Depot for a limited time, the warriors of Auraxis prepare for their final battle with new Norse-inspired weapons and cosmetics. 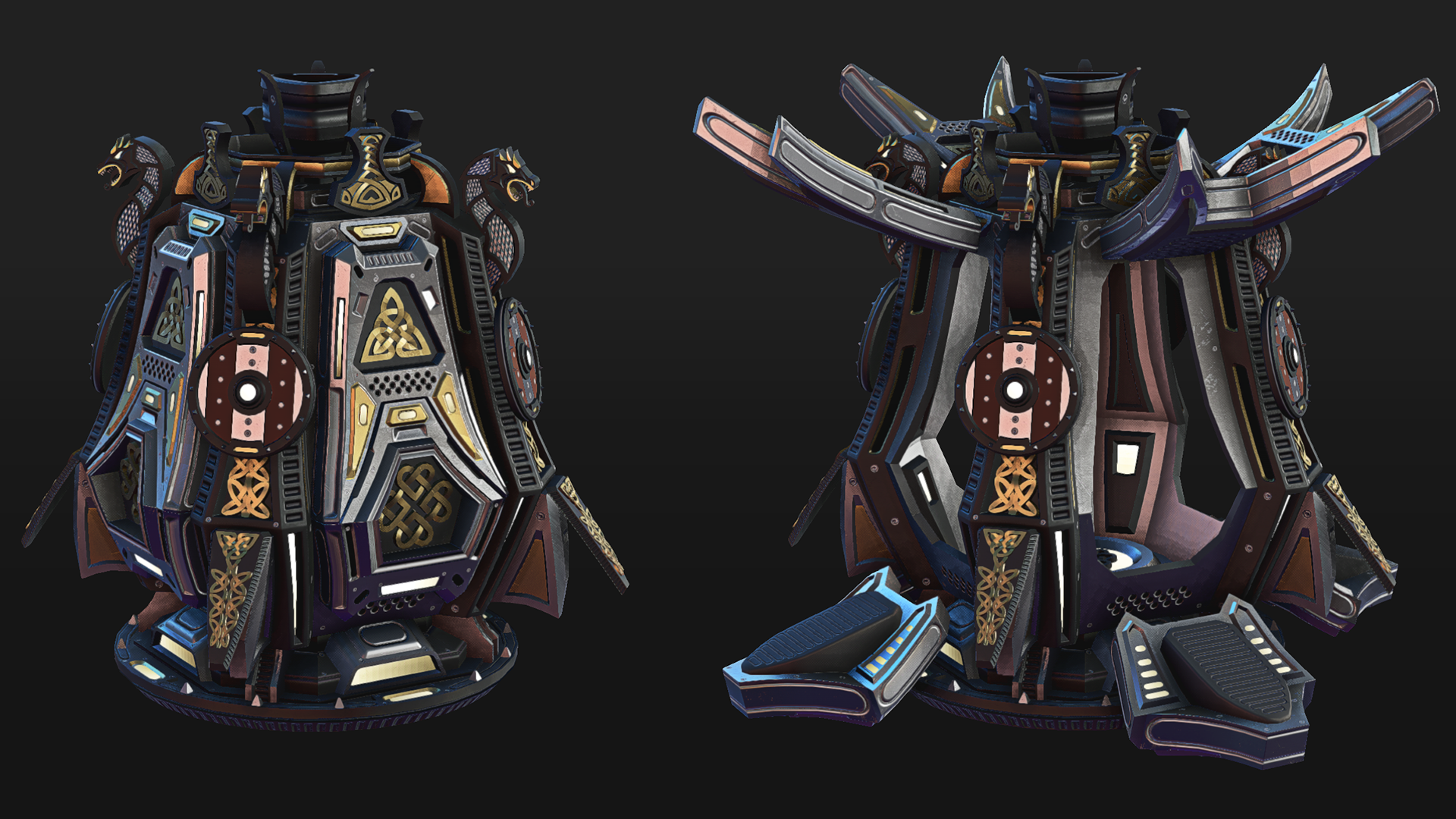 Drop the hammer with the Heimdall's Anvil Drop Pod. 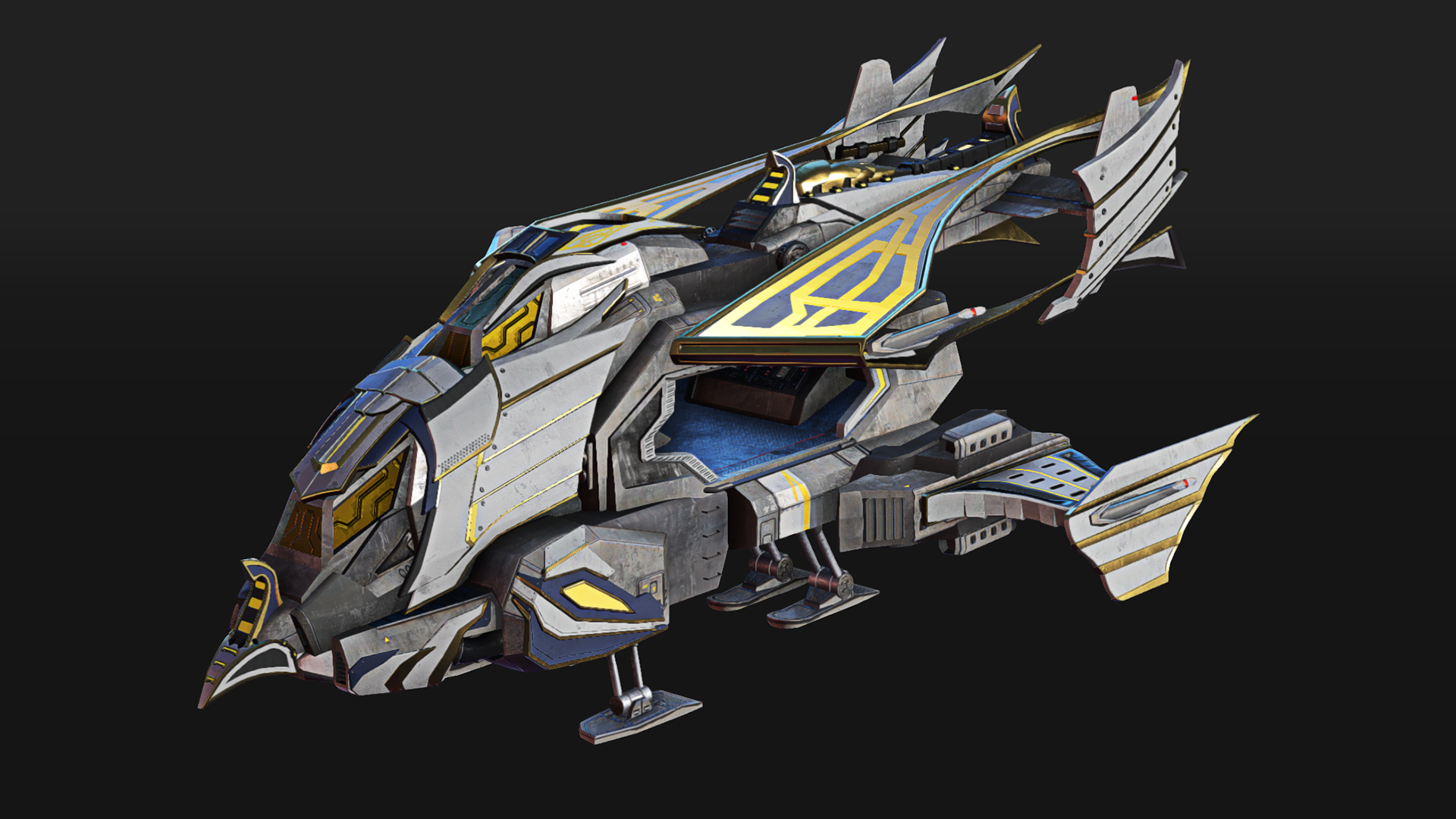 Be one of Freyja's chosen with the new Einherjar Valkyrie cosmetics. 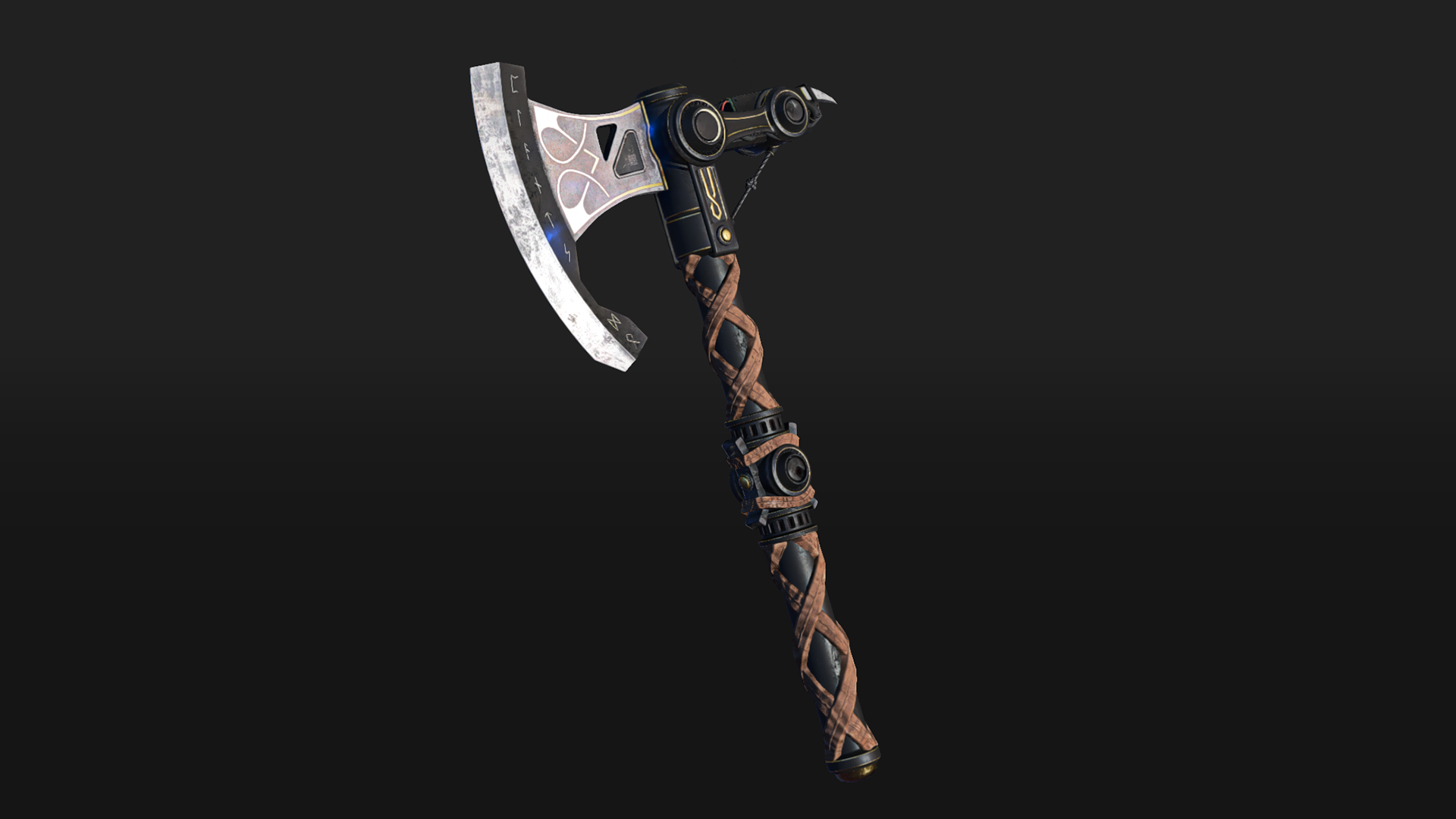 Call down the thunder with the Stormbringer heavy melee weapon, complete with custom audio and FX.

You've recently begun receiving messages from a mysterious contractor looking for help. Can you sort through the static in this new directive lineup?
New daily missions will be made available alongside this new directive. Be careful though, while on these missions, you become a High Value Target to other agents in the field. 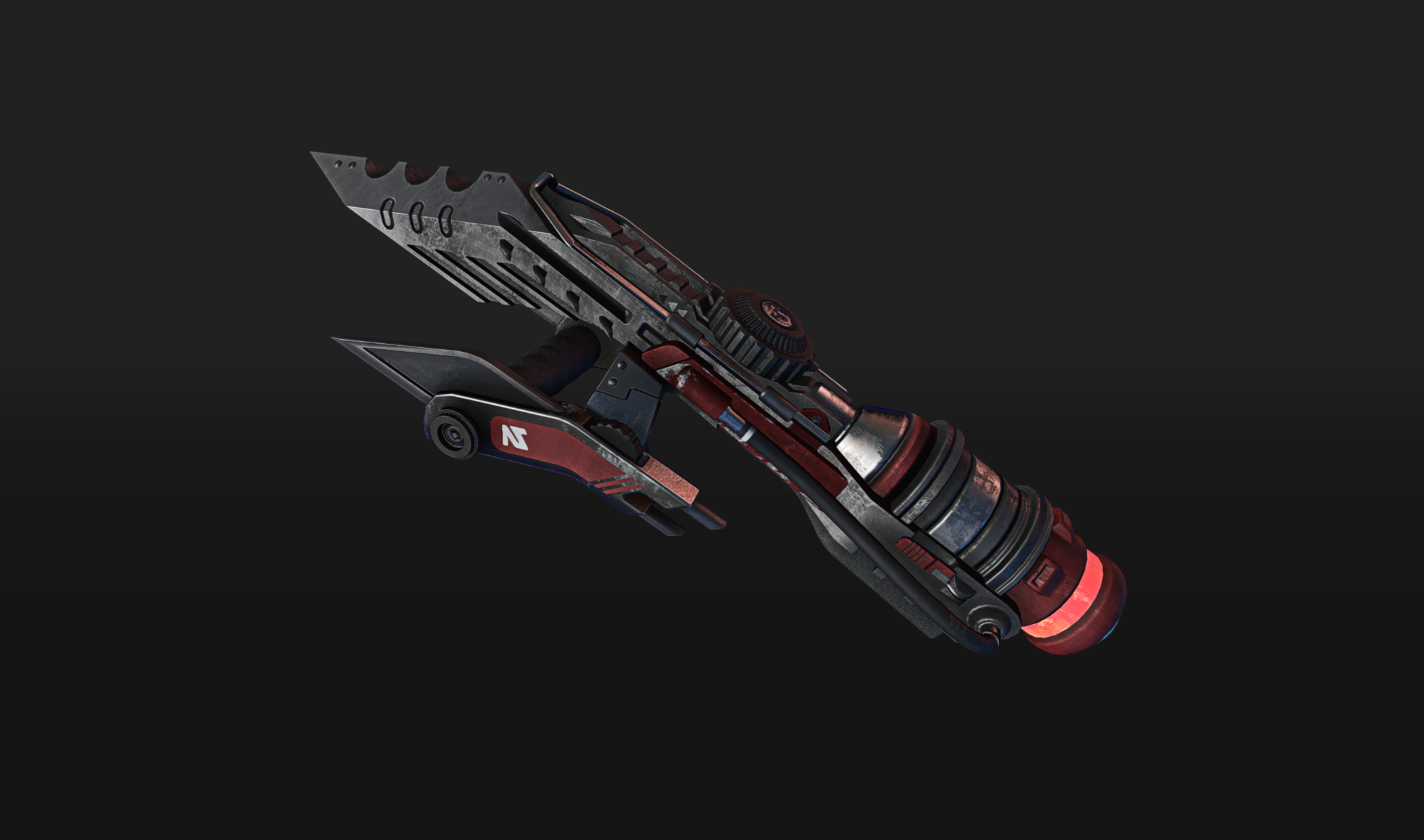 Mastering this directive will grant you the KTR-3 Saboteur, an anti-materiel punching dagger capable of inflicting damage to heavily armored vehicles.

A new Exceptional directive has landed, allowing use of the past Halloween event weapons, and this Anniversary's new weapon lineup! 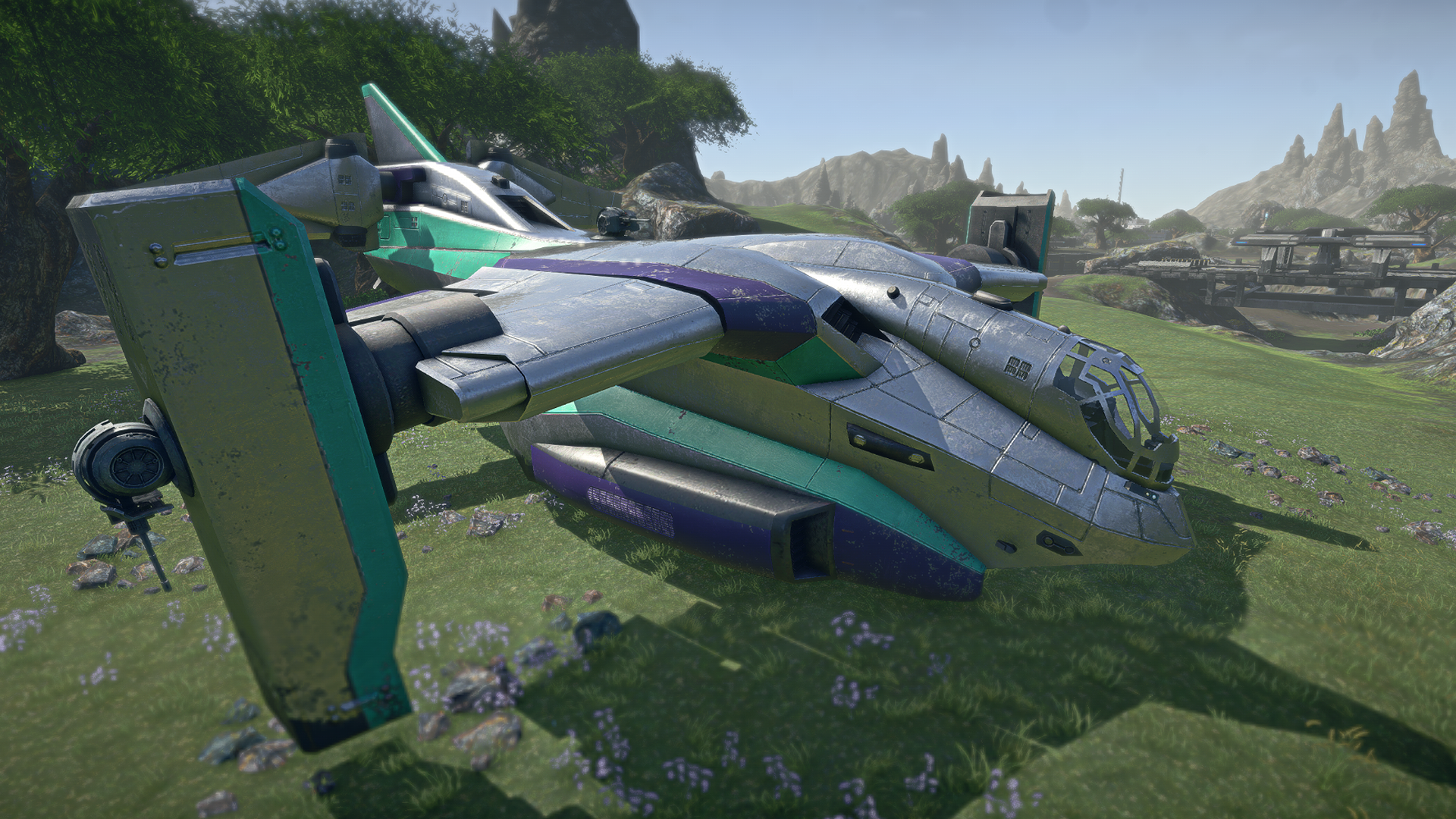 Prepare yourself for the gates of Valhalla with the Exceptional VII's Chromeshine Camo reward.

PlanetSide 2 is coming to Prime Gaming! Each month, new equipment and cosmetics will be made available to eligible Amazon Prime or Prime Video members! 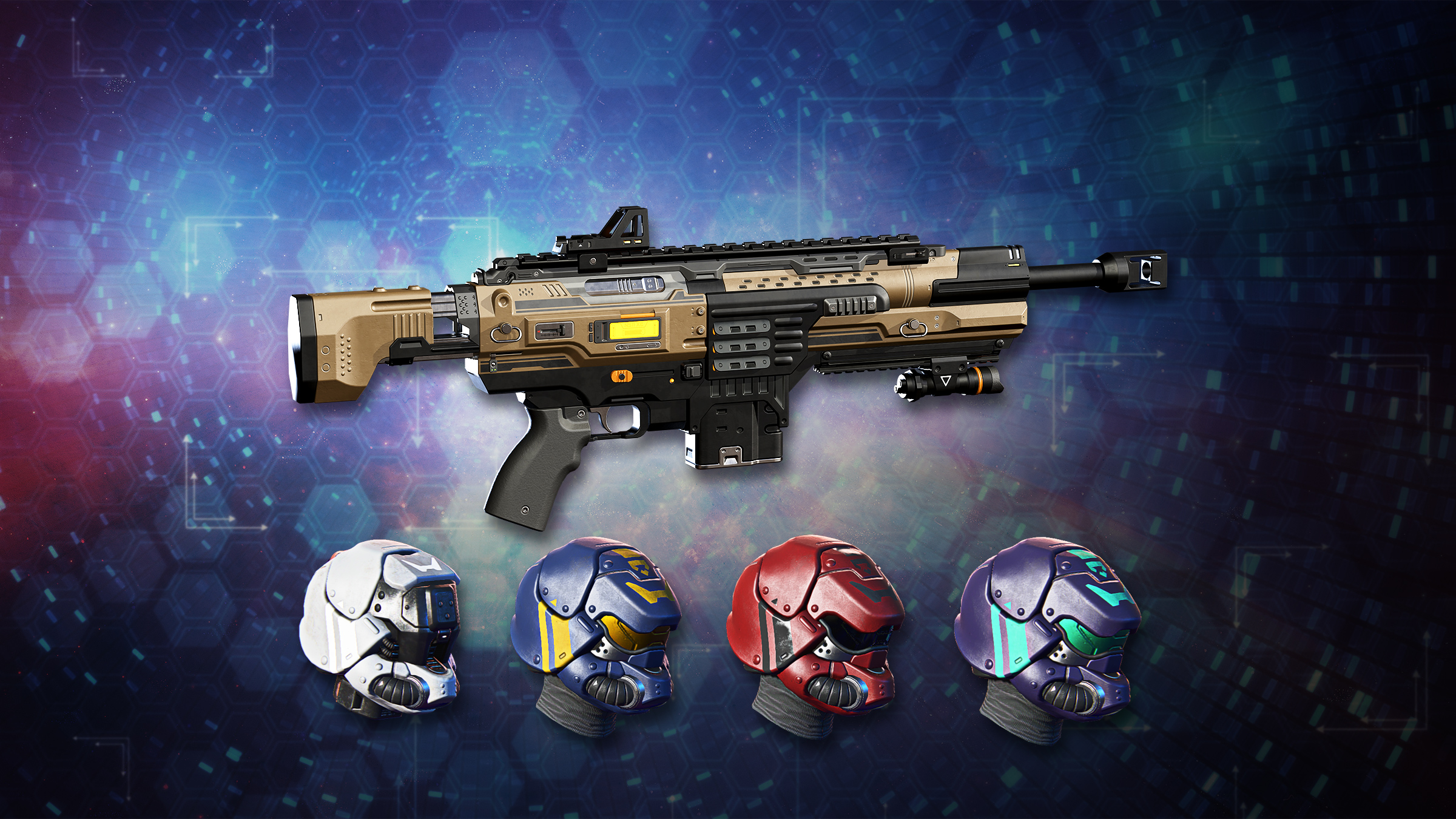 Many of the balance adjustments below have been made based on community feedback.

Dev Note: This is a heavy swing. These weapons will very likely need to get tuned back into a more usable position once more data comes in.

Dev Note: Similar to the above, this heavily reduces these weapons' effectiveness, and will likely need to get tuned upward after this update to make them more competitive with the semi-autos.

Infantry Rocket Launchers
Lock-on infantry launchers, and a few others have received a noteworthy revision.

Dev Note: The addition of this resist type lets us get away from using the "flak" functionality for lock-on launchers in order to deliver their AoE damage separately from the direct damage the weapons deal to ground vehicles. Now, a direct hit delivers the damage, and the AoE triggers explosive splash as you'd expect from a rocket launcher. The resist type has been configured to deal the same damage to ground vehicles as infantry launchers currently do, and more damage to aircraft than it was doing on the previous flak resistance.

Lancer VS22 (VS Rocket Launcher)

PlanetSide 2 was originally released on November 20, 2012... since then we've spent the last decade fighting over this massive, chaotic sandbox filled with explosions and gunfire. My first, most vivid memory of the early days was just after character creation – being briefed by the Overseer in that VO sequence we used to have, then dropping into a fight via Drop Pod. I was fully immersed as the metal screeched toward the ground below, the excitement and anticipation building.

Landing in an open field on Esamir (totally unhelpful, in retrospect,) I was close enough to an Amp Station to know I should head there, and far enough away to get absolutely destroyed by anyone noticing me scrambling across the coverless tundra. I was able to take out two targets (also, strangely in this open field) before getting gunned down myself. It was at that moment that I was hooked. There was something empowering about the challenge the game offered. Constantly whispering "I dare you to try," and forging memorable experiences from circumstance and possibility.

I imagine that many of you have similar memories, and that in some strange way, it's the cumulation of all those moments that have kept this game going strong ten years down the line. Thank you all for the challenge, on the battlefield, and even in the design space; the community, without which we would never have made it this long; and the memories, which I'm sure we'll make more of for years to follow.
-Wrel, Lead Designer