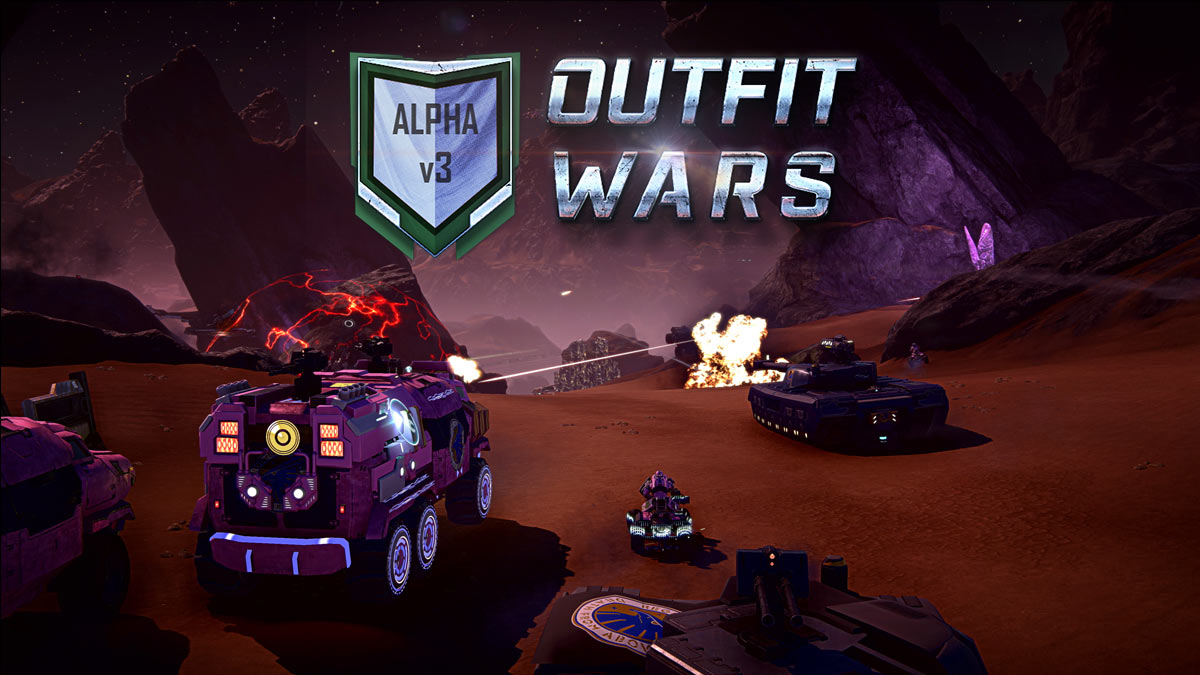 It's been an exciting (and frantic) past couple of weeks here for the dev team. With this last alpha test release of Outfit Wars, we've already gotten loads of feedback, observed bugs and edge cases we hadn't accounted for, as well as loads of hype and enthusiasm surrounding the events. In the post below I'm going to break down the issues we've noticed so far, and share what our plans are for addressing them. Before jumping into that though, let's look at some participation stats for the event thus far.

Across the 5 servers running Outfit Wars, we've had a total of 3,840 players make it into Desolation, and a total of 165 Outfits on the scoreboard, not including the ones who didn't make it past the pending status. No matter how you slice it, that's a lot of participation and interest, even if the match quality was a bit hit or miss.

That said, let's get on to the road bumps we've experienced along the way.

This is the issue that has had the most impact into Week One (and will likely follow into Week Two).  A fair amount of Outfits with no intention of playing in Outfit Wars have mentioned accidentally signing up, and with a bit of doing, it's easy enough to create or enlist with fake or alternate Outfits as well. This resulted in a fair amount of "no show" behaviors, and that's no fun to get matched with. Matches will continue to increase in quality as each round passes, but we'd still like to avoid this sort of behavior from the outset. Discussions of a "withdraw" mechanic have come up a fair amount, but the issue at its source is not that Outfits can't leave if they accidentally sign up, but instead that these Outfits are even signing up in the first place.

The way we currently plan to resolve this is by making sure that an Outfit is able to allocate all of the necessary players before they enter the enlistment queue.

The process starts with an Outfit member with the correct privileges initiating the enlistment per usual. At this point, instead of forwarding you to the pending or enlisted state, 48 players will be required to sign up for the war. When your enlistment is validated at 48/48 signups, all of the members in the queue will then be locked to that Outfit (in a similar way to entering Desolation locks you to that Outfit,) for the remainder of the war, and your Outfit will then enter the enlisted state, continuing the flow as normal.

If your Outfit can't field enough signups to participate when the enlistment phase completes, you won't enter the enlisted state, and your Outfit's enlistment cost will be refunded, provided you have the space. Also worth mentioning is that during the enlistment phase, players can sign up for the war on multiple characters, and they'll only become locked to an Outfit when it successfully gathers enough players to compete. Outfits who had your signature on their roster, but weren't yet enlisted will see that they then need an additional player to complete the enlistment, as your signature is removed from that Oufit's roster.

Addressing the issue this way drastically increases the friction required to exploit, prevents accidental signups from happening at all, and still lets players keep their options open when looking for an Outfit and character to participate with.

When enlistments took place, we noticed too late that we'd have issues showing players' match times early enough. The enlistment period would end the same morning the actual matches could take place, leaving very little time for players to get organized. Unfortunately, we couldn't slide the dates around once a phase had already begun without causing a lot of additional issues. This was strictly an issue with the transition from enlistment into the qualifier phase, subsequent matches show the times about a week in advance, and you're able to see that on Live currently. (Good luck next weekend!)

We have plans for fixing the transition from Enlistments→First Round Matches when Season 01 rolls around, and this should no longer be an issue moving forward.

A bug from PTS that unfortunately made it Live, was that we were showing local match times instead of the PST timings the tooltip stated. We got this fixed fairly quickly, but not without creating some confusion in the process. Of course, this now requires players in regions that don't use Pacific Time to convert match times for themselves, which isn't great, but is a bit better than using local times. The reason for having a singular time to gather around comes down to coordination. Players in an Outfit can be spread across drastically different time zones due to the international nature of our game, and having multiple players from different time zones trying to communicate "when the match starts" is troublesome when it's shown as local to them. Having a single source of truth is the way you want to go.

In the future we'll be using server time offsets that play nicely with how our code works, a task that requires a fair amount of planning. Servers will then display those times in the match column, instead of strictly PST as it is now. Connery will remain in PST, Emerald in EST, Miller and Cobalt in CET, and SolTech in JST, as you'd expect from where those servers are based. Additionally, we're looking at putting a server clock in-game so you know what time it is, a useful feature found in most MMOs.

Last is the discussion surrounding match times in particular. Originally, we had scheduled match times that were intended to avoid draining the sandbox while matches were in progress. We don't want alternate game modes to detract from the core of what PlanetSide 2 is known for, so we were being extra cautious. Perhaps too much so, as strong feedback indicated that many players wouldn't be able to attend those times and... well... we do actually want you to be able to play. The issue was easy enough to clean up, as match times are something we can modify, provided it happens before the actual round has started (a round begins when match times are revealed for the week.)

SolTech, unlike most other servers, has a couple of spikes for high player populations, and we're still trying to feel out exactly what the best times are for the most players there. Currently, we have the matches starting at 10pm JST, and this will continue to be the case for this weekend, but the round to follow will have that time moved an hour earlier, to 9pm JST. We'll continue to monitor and modify as needed there.

The first round of matches in Outfit Wars take all of the enlisted Outfits and then randomize their pairings. This helps avoid match fixing and other issues that come from players being able to pick their time slots. Subsequent rounds, however, are matchmade based on an Outfit's record, and ties are broken using an internal mechanism based around match performance and the quality of the matchup. The gist of it is that, the harder you fight in quality matches, the more likely you are to end up in a higher place while breaking a tie. There are a couple of issues with how our event plays out currently.

The first is that we didn't have enough Qualifier rounds for this test cycle. In retrospect, we would have had at least three. Season 01 is intended to be 10 rounds total, and there should be a lot of movement by Outfits up and down the scoreboard. Due to the current two-match qualifications this time around, however, some Outfits who have been fighting hard may end up getting cut by the ones that got a "bye" due to no-shows.

The second issue is that our tie-breaking system was broken in the first round. We don't want to share much about how this works, for fear of players gaming the system, but we have noticed that our system was giving certain Outfits too much weight. The result has been that certain Outfits were paired up in identical matches week two as they were in week one. We've got a bead on this issue and are working to prevent it in the future.

Third, though not specifically related to matchmaking, is that some matches were ending up in a state of indefinite play. This resulted in a Connery Outfit finishing a match against some no-shows, but not getting a first place bump for doing so. We have a fix for this particular issue, and matches should no longer end up in that dreaded "In Progress" state forever.

Overall, Alpha 03 was released earlier than we should have let it go, and some of these issues would have become quickly apparent if we weren't in such a rush to get the first update of the year out. So it's a bit bittersweet to be writing all of this up, but the results and enthusiasm surrounding the events thus far have helped confirm that there is a place in the game for this kind of system. If we can clean up the bugs and continue to polish, Outfit Wars will be on track to provide a cadence of excitement and tension that can help fuel the game's overall growth.

So, what does the future of Outfit Wars hold?

This alpha cycle in its entirety will give us a much better understanding of where we'll want to go in the future. It will tell us a lot about the potential for burnout and gauge interest past the honeymoon phase, it'll expose flaws we may not have come across yet, and it'll give us a better understanding of how the Outfit culture is being shaped when the desire to compete intersects the need to recruit more members. Once we've ironed out the kinks of the system, we could very quickly attempt new rules for a season, attempt matches at different player counts, create new playspaces to compete in (air-only space combat amidst an asteroid belt could be fun?) or maybe even give Outfits the potential to schedule private matches. That said, let's start from where we're at now, and see where we should take this.

Hopefully this gives everyone some insight into the state of Outfit Wars, and how we're planning to address some of the concerns with Alpha 03 and beyond.

P.S. The community did an amazing job covering the events over the past weekend, and I want to give a shout out to (at least some of) the folks involved in those efforts.

Scroll through this list to take a look at some of the content that was generated: https://www.twitch.tv/directory/game/PlanetSide%202/videos/all