The Rogue Planet Dev team went LIVE today on twitch.tv/planetside2, and if you missed the stream we've recapped all the big announcements below!

You can watch a full replay of the livestream here:

Read on for the full stream breakdown!

PlanetSide 2 wouldn't be what it is today without our creative community – your passion, talent, and incredible content have helped shape the PS2 universe, expanding it in ways we never could have imagined.

Starting on Friday, May 1, we’re opening up submissions for PS2 creators to send in their very best PS2 videos to the Rogue Planet dev team for an opportunity to be featured in front of the community and win special prizes! Submissions will remain open throughout all of May, and all new videos published or created after February 1, 2020 will be eligible. At the end of the month, the dev team will select their favorite 5 videos and put them to a community vote to select the Grand Prize winner!

We’ll share more details on the submission process later this week – but in the meantime, we put together a highlight reel of some of our favorite new videos that we shared on stream:

Each of the full-length trailers featured above can be found in a YouTube playlist here. Throw them a sub and show your support for the PS2 creative community!

READY TO DISH OUT PUNISHMENT?

The NS-66 Punisher is coming to a battlefield near you! This next-gen SMG is built for close-quarter aggression - its underbarrel is designed to adapt to class specifications, providing unique support and offensive capabilities for each class.

Check out the work-in-progress (WIP) preview below (final model and capabilities may change before its combat-ready):

Equippable by all factions (including NSO), the Punisher is a versatile option for any class that adds unique utility to your arsenal. It will arrive with our next major update.

Facility Modules operate parallel to the War Asset system, with an eye toward strategic base defense and construction.

With Facility Modules, your Outfit will be able to use accrued resources to craft and deploy infrastructure upgrades at allied bases, modifying the strengths and capabilities of that region. Like War Assets, Modules add tactical depth and versatility to your Outfit's front line operations.

Also coming next update is another community-requested feature: Outfit Logs! This new tool tracks Outfit activity, including new recruit enlistment, officer promotions (and demotions), War Asset crafting and deployment, and other useful information. For Outfit leaders and officers, Logs should provide additional functionality for organizing and managing your Outfit.

Finally…the BIG reveal! The Colossus Tank is the newest and grandest ground vehicle making its way into PlanetSide 2! 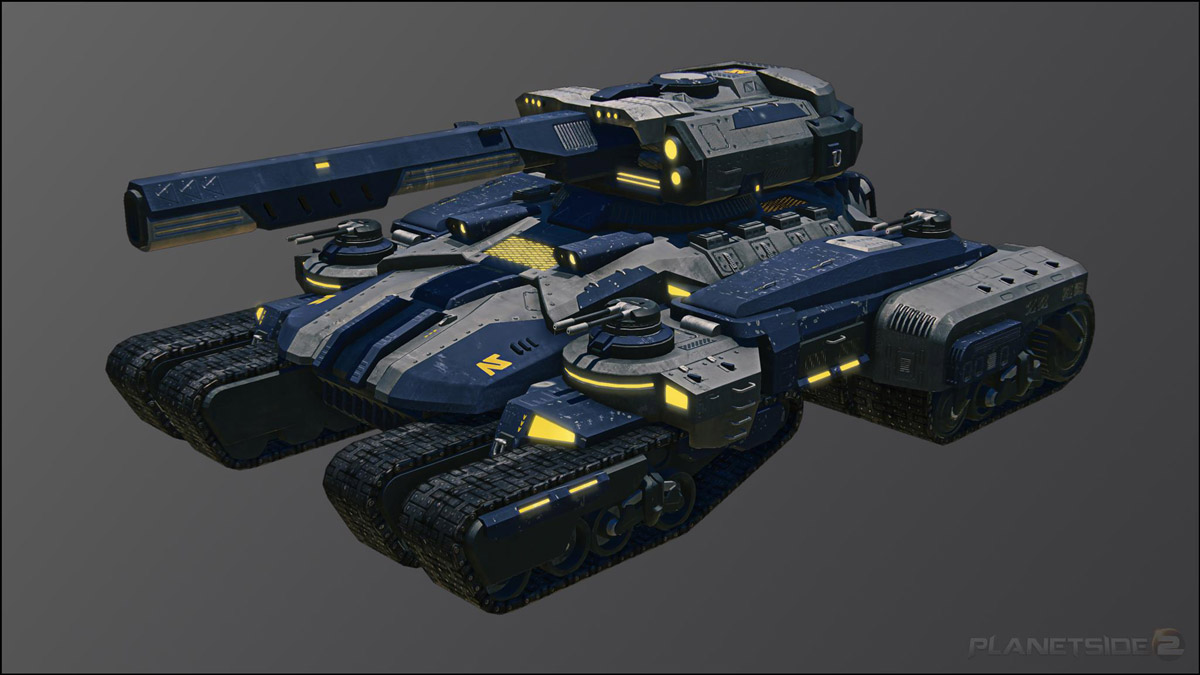 Packing a massive punch with its primary cannon, the Colossus currently seats 5 players: 1 to drive and operate the cannon, 4 more to provide support from each of its mannable turrets. The main cannon can be charged to fire vehicle-piercing shells capable of targeting Bastion weak points, filling a unique anti-air role among your combined ground forces.

And did we mention that it's really freaking...colossal? Generated using the War Asset system, the Colossus is intended to be pulled and customized on an individual basis, though a well-coordinated tank crew will have the greatest battlefield impact utilizing all 5 of its seats.

The angle of its primary cannon is designed to provide critical anti-air support, so don’t get too comfortable in that Bastion your Outfit worked so hard to craft…a few colossal shells can shift the tides of battle in a hurry!

You can check out an early WIP build of the Colossus Tank below:

As with the Punisher and Facility Module system, the Colossus Tank is scheduled to deploy with our next major update, which is currently slated for early June.

Lastly, we’re looking forward to celebrating the 17th Anniversary of PlanetSide with our community next month on May 20!  We'll have much more to share as we get closer to our franchise birthday. Gear up for a bash, soldiers!

What got you most hyped during today’s livestream?  Let us know on Twitter, Facebook, or the official forums!