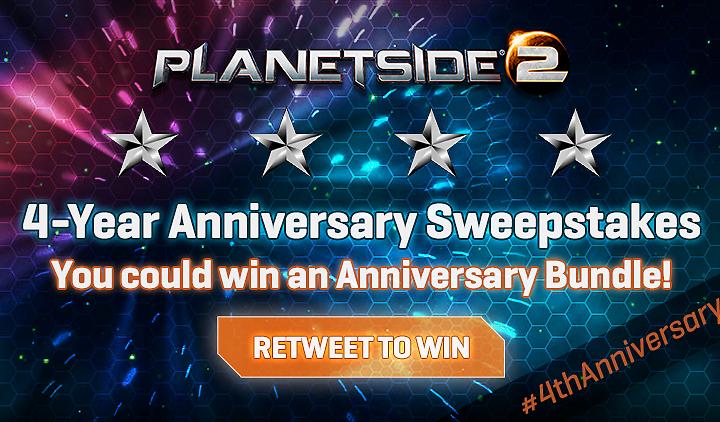 We’re getting ready to celebrate PlanetSide 2’s 4th anniversary! To add to the festivities, we want to give YOU a chance to win some great prizes!

Here’s what you need to do:

From November 14 – November 18, make sure you’re following @planetside2 on Twitter. During this time frame, there will be three official tweets from @planetside2 featuring a special 4th Anniversary-themed sweepstakes image. Retweet at least one of the three (3) official tweets during the Sweepstakes to be entered to win. You may retweet each tweet for a total of three (3) entries.

Here’s what you could win:

One (1) winner will be selected as a Grand Prize winner. The winner will receive their choice of either one (1) 4th Anniversary Bundle (PC) or 4000 BattleCash (PS4).

Head to Twitter and make sure you’re following @planetside2. Keep an eye out for the first official tweet, and RT it to your followers!

The Sweepstakes is open to everyone eighteen (18) and over at the time of entry. For full official rules, please visit this site.

Previous
The Fourth Anniversary Bundles and Double XP
Next
Auraximas Is Back: 25 Days of Deals!