We'd like to offer up the main focal points for 2022 in roadmap form. It's rare that we share what we're working on this far out, so roadmap below is divided into a few sections where features and content will land this year. The proper release dates and true scope of each update will be shared as we get closer to those individual releases.

The roadmap is meant to act mainly as an overview, and we'll continue doing all the detail work you can expect from update to update in the background. For example: Oshur is going to continue to receive more love, shielded Sunderer garages will come to non-Oshur continents, bugs and general polish will continue to land every update, balance will continue to be tweaked throughout the year, etc., etc...

Much of 2022 will be focused on addressing long-standing requests from the community, refining the game's systems further, and polishing the game as a whole. Some of that you'll see in the roadmap, but much of the work is way too nuanced to go into a document like this. That said, we're going to continue being communicative about updates as we move through the year. 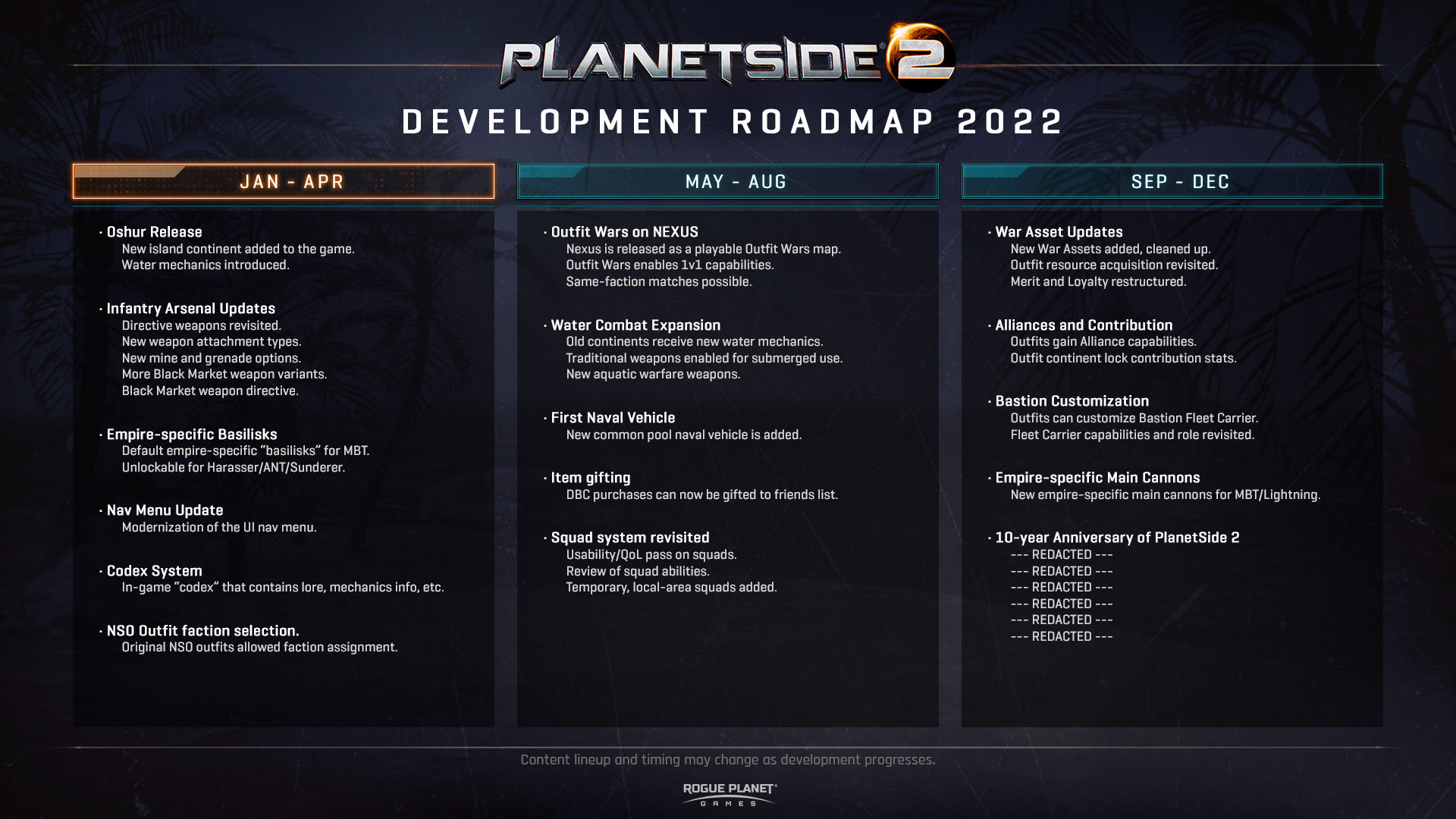 Toward the end of January the Expedition: Oshur release landed, complete with a new continent, totally new water mechanics, bases, and playstyle dynamics. We'll continue to build out Oshur as time passes.

We'd like to take a pass on weapon attachments in the game with the goal of expanding the customizability of infantry weapons across the board. Expect new attachment options, refinement of experimental attachments, and some improvement made to less-used infantry weapons. Directive weapons will be revisited to make them more fun and rewarding to use overall, as well as allow for attachment customization. You'll also see more Black Market weapon variants and a related directive line. Lastly, empire specific Mines and new class-based grenades will be added as well.

Empire specific basilisk options are the first new vehicle weapons we'd like to implement this year. As "basilisk-style weaponry," they'll be focused on the jack-of-all-trades usefulness, with stats, visuals, and audio that all lean toward the traits you'd expect from each faction. Main Battle Tanks will receive these weapons by default, and Sunderers/ANT/Harassers will receive these weapons as unlockable options. Yay, empire flavor!

We're long overdue on allowing the original NSO outfits align themselves to a faction, as was mentioned around the _Integration update last year, so we'd like to resolve that during the first few months this year. The Nav Menu is also getting some work done to modernize it, and bring it in line with the visuals of some of our newer screens. An in-game "codex" will also be added in the first portion of this year that will contain useful information about game mechanics, equipment, lore, all that good stuff.

We're bringing back Outfit Wars, and this time it's on Nexus. We learned a lot from how Outfit Wars played out in early 2021, including how strong the desire for this style of event is. The tech we're developing will allow for a 1v1 format, and much of what we did for the Integration update last year allows us to more readily allow two teams of the same faction to fight one another without issue. It also allows us to make use of a map that was teased in 2013, but never released to Live for public play. Nexus is a snow-themed continent with two Warpgates and three main lanes to battle through. This will be the new battleground for the first cycle of Outfit Wars later this year.

We'd like to expand on the water-based combat capabilities. Most traditional infantry weapons will be enabled for underwater use, mobility options will be added, and more reasons to fight underwater will be made available as well. We'll also be adding new aquatic warfare weapons to the mix as well.

The first legitimate naval vehicle will make its way into the game toward the middle of 2022, and will be a common pool option with its own weapon variety and associated directives. This vehicle will be mainly for Oshur, since there isn't much water elsewhere... but you never know.

Purchasing gifts for other players has been a long-requested feature that will be making its way to the game this summer. Players will be able to make DBC purchases that can be gifted to anyone on their friends list.

The squad system finder, squad abilities, and squads themselves could stand to have a usability pass and functionality cleanup. We'll also be pursuing the introduction of "Garrison Squads" which are temporary squads formed from loose players or squads of players in the same area, so if you're attacking or defending a base and don't have a squad of your own, you can opt to be plopped into a group in that area to increase cohesion. When the fight is over, or if you move to another area, you leave the squad with no strings attached, or you could choose to continue on with those players you were just grouped with.

After Escalation and the other Outfit-based updates in 2020, content for Outfits stagnated a bit, and didn't continue to grow the way we were initially hoping. In 2022, we're looking to expand upon War Assets and polish the existing call-ins, as well as revisit the way Outfit Resources are awarded. Merit and Loyalty as systems are going to be given a second look and streamlined, with the potential for new deployables here alongside those coming with the War Asset system.

Outfits will gain the ability to customize their Bastion Fleet Carriers' weapons, visuals, and functionality. Coinciding with these updates, we'll also be evaluating the Bastion's role in the game overall. We don't want it to (just) be a flying death machine, and would like it to factor into the overall meta gameplay of a continent.

This year we'd like Outfits to be capable of forming alliances of multiple outfits to increase the scale of cooperation across a continent, pool Outfit assets, and potentially extend into Outfit Wars later on down the line. In addition, knowing which Outfits or alliances are putting in the most effort on a continent, and where their specific strengths are is something we'd like to provide visibility into and possibly tie gameplay to. In general, we want to celebrate Outfits more, and acknowledge their efforts as much as we can.

Main Battle Tanks and Lightnings will gain empire-specific weaponry options. It's been a long time since these vehicles got some new toys to play with, despite being very popular and oft-used vehicles overall.

Ten years is an incredible milestone for a live-service game, and we've got plans to do it big. Consider this one a bucket of AlrightThenKeepYourSecrets.gif for the time being.

There will undoubtedly be more packed into each update than the highlights convey, but hopefully the above is enough to whet your appetite for what's to follow in 2022.